Jeff Jones, Wonder Woman and a little snip here and there 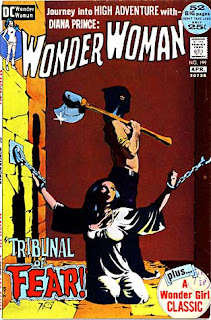 This is one of my favorite comic-book covers of all time and it's certainly the favorite of my collection. The cover was done by Jeff Jones, a phenomonally talented artist in the fantasy field whose popularity was at its highest in the funky 60's and 70's. His contemporaries in the comic-book field were Bernie Wrightson, Barry Windsor-Smith and Michael Kaluta. All legends in the industry. Somehow, however, Jones has missed out on his own legendary status. Except to his legion of fans, I guess. He didn't do nearly as much work for the comic industry as the rest of those guys, but the stuff he did was top-notch.

I've talked about this comic book cover before, but it's not going to stop me from talking about it again. I wasn't a fan of Wonder Woman, except for the obvious. She had big cans. But I was a fan of some of Jones' artwork and when I saw this issue at a comic-book convention, I knew that I just had to have it. It's so great. The not-so-subtle bondage references, the incredible shadow work and that wonderful title. Tribunal of Fear! I didn't even give the inside of the book more than a cursory glance, but the cover...wow!

I've been doing Jones a disservice throughout this posting, by the way. I keep referring to Jones as a man, when if fact "he" had a successful sex change operation back in the late 1990's. "Jeffrey" is now known as Jeffrey Catherine. She's gone through a lot since then. A nervous breakdown, financial ruin, but she has persevered and is painting again.

Anyway, if you are interested in her work please take a look at the link I provided above. Frank Frazetta (no slouch himself) once called Jones "...the greatest living painter." Certainly one of my favorites.

PS - This Jeffrey Jones is not related at all to douchebag actor and registered sex offender Jeffrey Jones. Ferris Bueller was right not to trust that guy. He's a kid toucher.

PPS - Wonderful nougat-y deliciousness over at MovieGrenade for you to ignore. Hey, some of you will eventually wander over there if I keep bugging you like this. Right?

PPPS - OK, so I've tried uploading that image from 4 different sites as well as my own computer and Blogger keeps fucking it up! If there is no picture at the top of this entry then just go here to look at it. AAARGGGGHHH!!!

Pissed in the corner by Verdant Earl at 8:29 PM

The picture didn't show for me?

That is a beautiful cover. Never seen it before... was that from Diana's "mod phase" when she decided to scrap her armor?

Well, she not only scrapped her armor...she scrapped her superpowers as well. But yeah, it was her "mod phase". She gave up her powers to be in a "man's world", she learned martial arts and weapons, and she fought crime the old-fashioned way.

She was kinda like Emma Peel of the Avengers (TV not comics).

Ahh Wonder Woman... Yeah I dressed up as Wonder Woman once. I tripped over my cape and hit my head on the edge of a table.

The cover is pretty good, I can see why you like it xx

was this about comics...again....
How about some good ole hockey talk ;o)

Slyde - Same with me about WW.

Ahhhhhhhh, I just knew you'd bring up the kid toucher. You didn't let me down.

ajooja - sometimes you have to wait for the post-script sections for the goods stuff. And I always try to bring the good stuff. ;)