Back from The Back Room

Had another one of those crazy weekends, but that's neither here nor there. I'll do a full post about it on Tuesday (with pictures to boot!).
The hi-light of the craziness was the discovery of a new bar in old NYC on Friday night. We went to this "new" speakeasy down on the Lower East Side called The Back Room. It's co-owned by such big shots as Tim Robbins and Mark Messier, but there were no bigger shots there that night than my crew. Okay, I promise never to use the phrase "my crew" ever again.
We arrived just after 8PM, having had a few before we got there. Once we found our way down the non-marked alleyway, complete with a gate that I think they paid extra for to make it super-creaky, we headed into a beautiful 2-level lounge. There is also a secret door into a hidden back room, but it's not open to the public (have to be in-the-know, if you catch my drift). Must finagle my way in there one day. I'll get Gia on it!
The drinks are served in teacups to preserve the "prohibition era" feel of the joint. If you want a bottled beer, they wrap it in a paper bag for you. Neat.
We had some great drinks (duh) while we were there. One was a kind of margarita with brown sugar, cinnamon and cider in it. I chatted up the bartender, and he offered to make me one of his special cocktails (quiet, Slyde) that wasn't on the drink menu. It was a bit of Hendrick's Gin with some muddled mint, lemon and cucumber. It was awesome!
Anyway, headed to Opening Day at Yankee Stadium tomorrow. Can't wait! That and the finals of the NCAA basketball tourney in the evening should make for a pretty drunken Monday.
Then...rehab. It's about time...phew! 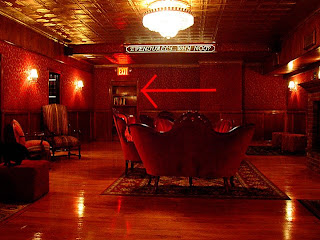 Here is a photo of the upper level of The Back Room. The arrow points towards the entrance to the "hidden back room". Of course, the arrow isn't really on the wall like that. It's just on the picture. Otherwise it wouldn't be very hidden. C'mon people, think!

Pissed in the corner by Verdant Earl at 10:13 PM

awwww, you now have your OWN "Toasted Almond Guy!"

I just love that they serve the drinks in teacups. And the beer in paper bags. Man. South Florida has nothing on old NYC. Even though old NYC pretty much lives here.

I want to go there. Liz and I are pretty good at finagling. Atleast we used to be...what am I saying...we still got it!

Slyde - you are the only "toasted almond guy" around, my friend.

Madge - it's a law. When you reach a certain age you have to move to Florida.

I know I know. I've been busy on facebook. Damn computer. I really should be writing...

that "special" drink sounds amazing! i am passing that recipe on to a gin drinking friend.

Mel - I'm going back there this Saturday night. Can't wait!