On a recent jaunt, yes jaunt, to a local liquor store I happened upon this beauty: 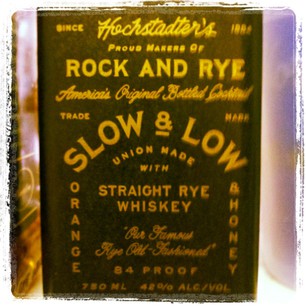 That's Slow and Low from Hochstadter's Distillery out of Philadelphia, PA. It's the first "bottled cocktail" I've ever purchased, I believe. It's their version of an Old Fashioned. Straight Rye whiskey mixed with orange peel, honey, something called horehound and rock candy. The result is a sweet, extremely drinkable cocktail that you simply pour over ice. That's it. Open bottle, pour over ice and enjoy a nice cocktail. Much easier than, um, fashioning an Old Fashioned at home. See what I did there?

The roots in this product come ye olden days when barkeeps, and later pharmacists, would pour straight Rye over rock candy for a more palatable quaff. The pharmacists because of the supposedly medicinal properties of whiskey. Sure. I know it often heals what's ailing me. Maybe I'm just a throwback. Anyway, that was a Rock & Rye. And Hochstadter's apparently bottled that for the past century or so. Now they've moved into the Old Fashioned game. And it plays well.

So if you happen to run across it in your travels, pick up a bottle and enjoy a simple, tasty cocktail at home that requires little more than pouring it.

Pissed in the corner by Verdant Earl at 11:44 AM

OK, so i just read this to the MITM and his response? "baby, we need to make a cocktail right now!" thanks for the tip!next time i'm a bubba's (the liquor store), i'll look for this. BTW, have you tried Hendrick's gin, tonic, club soda with cucumber slices? delish xoxoxox

(damn, i don't remember if you're a gin kinda guy)

I can attest that Earl is THE gin guy. I'm a close second.

Adding this bottled cocktail in my travels (cause you can sure as shit bet that Utah will not have this).

Marty - I think it might be strictly East Coast right now, but I can't be sure. Their website kinda sucks.

Though mostly a beer drinker, my favourite treat is Jameson, straight, sipped slowly, lovingly, caressing my tastebuds with love and warming the cockles of my heart.

Map - I love a Jameson, sipped slowly or shot back with intent. Either way is fine with me. And I'll join you in whatever is being served as well. Sláinte Mhaith backatcha! :)

i used to drink rock and rye when i had a sore throat. do they still make it?
i shall be sure to try this new cocktail. thanks for being my guinea pig!