So a while back, former big-time celebrity Brittany Murphy died under mysterious circumstances. She was alleged to have had an issue with drug addiction, but no drugs were found in her system at the time of her death. No illegal drugs, that is. Plenty of prescription drugs. But she was determined to have officially died of of acute pneumonia and severe anemia. Weird, but shit happens.

A lot of press focused on her tubby nut-job of a husband, Simon Monjack. A lesser celebrity with some producer/writer/director credits on his IMDB page. He seemed...well...guilty, for lack of a better word. Then he tried making money off of her memorial service. That didn't work out too well for him. He seemed to be in a downward spiral by his actions and appearance. Drugs, heart problems...all that shit.

So it wasn't much of a surprise when he wound up dead as well a couple of months ago. It was weird. He was a big news story when his wife died, but when he died the news was clearly bottom of the fold. I didn't hear about it until about a week after it happened. That doesn't mean much. I don't follow "celebrity" news all that much. Especially if the news doesn't involve boobs. Female boobs, that is.

But today I read that the official cause of Simon Monjack's death was announced by the coroner.

Acute pneumonia and severe anemia. Some prescription drugs in his system, but not enough to kill him.


:::cue the X-Files music:::
I don't know why no one else has figured this out, but I know who or what killed Brittany Murphy and Simon Monjack.

It was the vampires from 30 Days of Night! 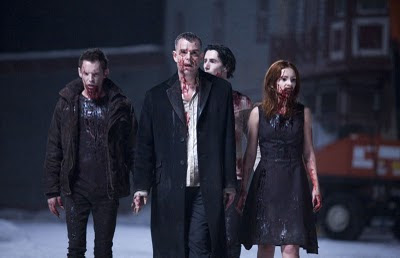 Think about it.  How does a relatively healthy young person get acute pneumonia?  Maybe they were exposed to the frigid elements of Northern Alaska in the winter while being pursued by blood-thirsty killers.  And that severe anemia?  Sounds like a vampire attack to me!  Oh sure, they were in sunny California when they both died.  But that's just details.  I'm more of a big picture guy.  And the big picture in these deaths screams vampires and freezing weather to me.

Mulder and Scully would be so proud of me.

Creepy Related News: Hey, guess what?  There's a new X-Files comic book mini-series out right now starring Mulder and Scully and guess who they go up against?  That's right...the vampires from 30 Days of Night!  Coincidence?  I don't believe in coincidence.  Mwah-ha-ha-ha-ha!!!

Okay, now you're just freaking me out, Earl. I think it's time for me to put the tin foil back up on the windows.

This is where I start to think I honestly am doin it wrong. I looked at her IMDB page because, just off hand, I didn't recognize her name or the story you were telling. Aaaaaaand I recognized a couple of things on her resume but didn't see any. So I'm thinkin' - yeah it's the same old boring thing "oh hahaha RW's here and he doesn't know any of these movies or shows or people etc. and oh hahaha." Burp.

But I'm starting to think it isn't funny, and it isn't somehow sideways cool or something, it's rather pathetic. I have to absolutely start getting back into the general culture. Seriously.

RW - I honestly wish I lived in a world where I had no idea who the fuck Simon Monjack is/was. I mean Brittany Murphy...okay. She was in a couple of movies I kinda liked and I have this weird brain that has to know the name of every actor in every movie, so that's a foregone conclusion. But besides Clueless (which was a time and a place kinda flick for me), there isn't anything in her catalog that is must-see material. I think you are doing just fine. Don't worry about it.

Slyde - But I hear you were offering it up to everyone last Saturday night. No one took you up on it, but that's par for the course.

He tried making money off of her memorial service?

I dunno, man. I still smell bullshit. Who in the hell dies of pneumonia these days ?

this sort of proves my point. Vampires are only attracted to b-rate actors. You will never see vampires going after Angelina Jolie or Brad Pitt....not that they shouldn't, but the b-moive actors must have better tasting blood.

Bruce - Better tasting blood, and they aren't surrounded by throngs of admirers. Makes for an easier kill.

Your theory makes perfect sense to me.
That guy was disgusting.

I'd love to visit Barrow, Alaska some time.

Nej - Heya! I'm fascinated by Barrow too! But I wanna go in the middle of winter when it the coldest. I also want to spend time in an ice hotel in the Norwegian wilderness and winter-over in Antarctica, so... Yeah, I'm not normal. :)

That Simon Mojack guy would scare off even the most dangerous of vampires..

Loved the movie. Love the theory. Vampires are real.

Nej - I don't even like cold weather. How's that for abnormal? ;)

Candy - With a capitaly "Fug"!

You're like Sherlock fuckin' Holmes. And that new comic is really good.