I got a figurative kick in the head the other day while watching some junky sci-fi show on the SyFy (oh how I hate that particular re-branding) Channel. Something called Riverworld.  An adaptation of the books from Philip José Farmer in mini-series form. It's about an alien terraformed world consisting of one large river valley that is populated by a bunch of resurrected humans who get involved in a power play between two factions of an alien race. 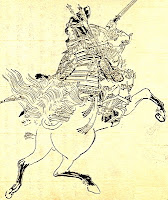 But none of that really matters here. What does matter is that one of the resurrected humans is a Japanese warrior woman turned Buddhist nun named Tomoe. Played by a decidedly non-Asian woman in the SyFy series, by the way. That doesn't matter here either, although it does bug me a little.

No, it's the inclusion of a Japanese warrior woman turned Buddhist nun named Tomoe that I was interested in. Because back in the day, I was a big fan of a trilogy of fantasy novels written by Jessica Amanda Salmonson about a Japanese warrior woman turned Buddhist (or Shinto) nun named Tomoe Gozen. But that doesn't make any sense. Farmer's novels and the SyFy mini-series included historically real characters, right?  Why would he choose to use a fictional character from a fantasy trilogy that no one in particular has even read?

Well, it turns out turns out that Tomoe Gozen was a indeed a real woman who lived around 800 years ago.  And she was the rare female samurai who fought during the Genpei War*.  Well, she most likely was real.  Kind of hard to prove.  Some think that she may have been the creation of one of the authors of The Tale of the Heike.  Who really knows?  But the mere possibility that she actually existed is what blows my mind.

I just never thought that Tomoe could have been a real person.  Sure, some of the background stuff in Salmonson's work was based upon historical events.  I was kind of into Japanese history and mythology back then, and I had read plenty of stuff on my own.  That's how I found Salmonson's trilogy, I guess.  But her work was so grounded in mythology that I never even dreamed that her subject may have been a real-live person.  A female samurai fighting amongst men with double butterfly swords.  Incredible!

Now I have to go back and find those novels to re-read once again.

I've said it before...isn't The Internet a wonderful thing?

*Oddly, this is the second time I've come across the Genpei War here on my bloggy travels.  Remember the first time?

I love finding out shit like that, though. Awesome!

Very cool. There is nothing sexier than fierce women.

She was in Kill Bill i'm thinkin.... or was that Boudicca? I'm confused...

RW - We have friends who are expecting their first child and they've been asking us for name suggestions. I've been pushing for Boudicca if it's a girl. Seriously.

did you watch everything available on netflix already?

Slyde - I know, right? Actually I watched it on NetFlix Instant, not the SyFy Channel as I wrote in the post. Thought I did, but I just saw it on my Netflix queue. Oops.

I know NOTHING of which you speak, but I will agree - I HATE the new "SyFy" monicker.

The re-branding to SyFy is one of, if not *the*, most ridiculous things I've ever witnessed. I'd love to know to know the thought process behind that decision. Wait, no I wouldn't, I'd rather punch myself in the face.

Kevin - Sci-Fi wasn't available to be protected by trademarks because it is a common generic term for Science Fiction. They also did it to market their product without any confusion. Ugh.

Wow. That was very interesting and I learned something new!! Wait, what blog is this again... ;-) I hate the SyFy thing, too. We geeks know well and good that it's spelled ScIence FIction. Jeesh

Faiqa - Maybe, ahem, if ya stopped by more often you'd realize this is an institution of learnin'. Hmmm? ;)

HEY!! I read everything you write. I just don't always *comment* because you're generally so brilliant, I have nothing to add. :-)

Faiqa - Flattery will get you everywhere.

so that tomoe was one bad ass woman, eh? oh how i love strong women. i'll have to read up on her. she might join the ranks of joan of arc in my heart...