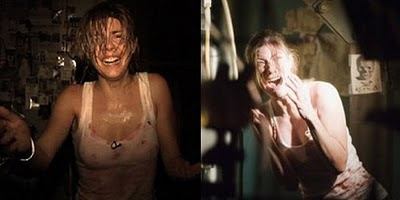 Let me start by saying that I saw the American remake of [REC], Quarantine, prior to seeing the original. That's not the ideal situations when trying to compare and contrast the two films in terms of originality. I thought Quarantine was creepy as all hell, and by the time I saw [REC] some of that creepiness was muted.

Some of that creepiness. Not all. In at least one way, I found [REC] to be far scarier than Quarantine was. It went...places that the remake refused to go. Scary places.

In fact, I think (and a lot of folks agree with me) that [REC] is the superior film. I still love Quarantine, but now that I've seen the original I find myself wishing it were just a bit more like [REC].

The films are almost exactly the same. The American film is an almost shot-for-shot remake with just a few small changes. A news crew is spending an evening with a fire station and they accompany them on a call. Both movies are shot from in point-of-view style in found footage ala The Blair Witch Project. A disturbance is soon called in from an apartment building. Something to do with a woman stuck in her apartment. But the woman appears to be a bit disturbed. She's mumbling incoherently, screaming occasionally and biting indiscriminately. Yeah...she got da horror movie blues, my friends.

Soon, very soon, all Hell breaks loose. The government steps in and seals the building off. Something about a contagion loose in the building. Everyone is understandably panicked. More so when some of the other residents, police officers and firefighters begin displaying the same symptoms. Nom nom nom!

One of the things I admired in both films was the found footage plot device. In similar previous films (Cloverfield, Diary of the Dead, etc...), I found myself wondering why they didn't just put down the camera and save themselves. These films found some unique ways to keep the camera rolling that actually made sense. Even the reporter's "we've got to show everyone the truth" mantra that she keeps repeating.

The biggest differences in the two films are the big reveals of the cause of the contagion toward the end of each film. Both are horror standbys, but I found the root of all evil in [REC] to be far, far scarier. I'm not gonna say what it was because you should see it for yourself. If you already have, then...you already know what I'm talking about.

So if I had to rate each film on a 5 star Netflix scale, I would probably move Quarantine down to 4 stars (I had initially given it 5 stars) and bump [REC] up to 5. But both films were a lot of fun and creepy as they get. If you are dead-set against foreign subtitled films, then go with the American version. But if you want the better movie then go with [REC].

Hmmm... I did not know that Quarantine was a remake. I'll have to check out the original now. thanks for the tip.

i remember when the american version came out, but didn't realize it was a remake, but then, i'm not a big scary movie fan. but, if the original is on streaming, i'll check it out. xoxoxoxo

I liked Quarantine quite a bit, even for the ending which was shown in the fucking previews and annoyed me. I'll have to give [REC] a shot too.

Paticus - it's interesting to compare.

Savannah - It's not on streaming right now. Quarantine was for a long time, but now it's not either.

Adam - Ridiculous that they showed that scene in the trailer. Same with the ending to Paranormal Activity. Hollywood has lost the art of making a good teaser trailer.

Slyde - I think you'll like it better than Quarantine.