I don't do fast food very often. We are trying to eat better, and the nutrition (or lack thereof) you get from your average fast food joint doesn't jibe with that.

But when I do, I generally prefer the burgers from Burger King over those from McDonalds. So maybe once a month or so, I get the hankerin' for a Whopper.

I'm also a guy who has claimed many times in the past that advertising really doesn't work for me.  I don't really see something in an ad and immediately want that.

All that being said, the new commercials for the California Whopper at Burger King have been impossibly irresistible for me.  Guacamole, swiss cheese and bacon. These are a few of my favorite things. I had to have me one.  The only question would be when, not if.

When was yesterday for lunch. 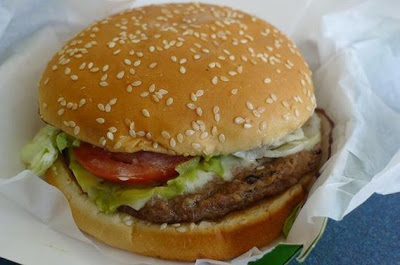 How was it?  Well, the guacamole was plentiful, but it was a bit bland and mild. The bacon was neither crisp nor tasty, but it did impart the necessary "bacon" flavor. The swiss was a nice touch, but it kinda got drowned out with the guacamole and bacon, even if they were both on the tasteless side.  And the normal smoky flavor of the Whopper was drowned out as well.

Overall? It was pretty much what I expected.  A sloppy, guacy mess.  Which is fine. It was almost exactly what I wanted, sad to say.  With fast food, you hope for the best and accept mediocrity.  That's exactly what the California Whopper is...mediocre.  Which, like I said, is fine.
Pissed in the corner by Verdant Earl at 12:04 AM

Ew ew ew.
It doesn't even sound good to me, but I do prefer Burger King or Wendy's to McDonalds, anyway.
We don't do fast food that often, either -but every now and then, it's just necessary.

But did you ever try the Sonic Chicago dog?

And that's a bummer. If you're going to go for it and have some fast food, I'd like it to be worth it.

swiss cheese is from the devil.
#truestory

This post is really in need of some song lyrics or a music video...

Uncool - Yeah, I did finally try it. It was...okay. And pretty much the only option for me for a Chicago Dog in this area without making it myself.

Candy - Yeah, a bummer. But I didn't really expect anything more.

Becky - you crack me up with your Twitter hashtags.

Slyde - What your comments need are some humor...

I recently tried this Calif Whopper and was very much underwhelmed by it. Bland, sub-par bacon and just not that tasty.

For a better Guac burger, Five Guys or even Carl's Jr (Hardee's in your neck of the woods) is much better.

Marty - Five Guys is pretty awesome. But the nearest Hardee's to us are in Delaware and Pennsylvania. None in NY.

For me, the biggest problem with this burger was that it wasn't an improvement over the normal Whopper.

Ren - Yes, it wasn't an improvement. I don't think it's any worse, just different.