I'm talking about Syd. We finally got Syd groomed the other day. He's getting up in years and he doesn't take care of himself as well as he used to. Hence he started to get a bit matted in some areas. Plus, due to his ginormous size (he's large), there were areas that he just couldn't reach. We tried grooming him ourselves, cutting out the matted areas and constant brushing, but it just didn't work. We felt professional help was needed.

Here's a before shot. No one can crash out like Syd can crash out. He stayed in this position or positions similar to it for about 4 hours one day. He must have had a rough night. 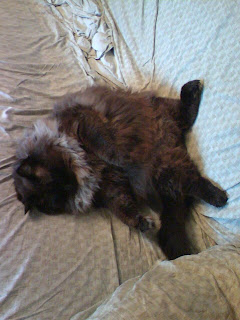 And here's an after shot. Not the best one in the world because he hates getting his picture taken. Hard to see, but we left him hairy on his legs, tail and head. The rest of him would make a Marine proud. Just stubble. He's so happy now without all that hair. His energy level is way up and he now seems able to clean himself in those areas he previously could not reach. We are all thankful for that. By the way, that is my sexy pajama-clad knee that you see in the foreground. Rowr! 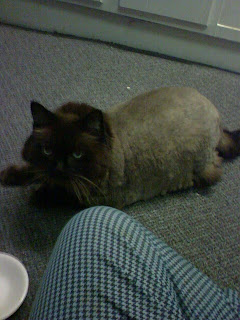 One side effect of his grooming that we did not foresee is the reaction of our other cat, Sammi. She might be a bit dim because there are times that she doesn't recognize him in the Emperor's new clothes. Granted, she has a bad eye so her sight isn't the best in the world, but don't cats go by smell most of the time? So they've been fighting a lot.

Oh, and he has become a bit weird about being picked up since we groomed him. Maybe he thinks we are going to take him away to the bad place again. I don't know. Last night I picked him up and he started a low growl. I knew this wasn't good so I immediately placed him down. Then he attacked my feet. No real bites or scratches, he just kinda pounced on my feet. Then he must have felt bad, because he followed me around the house for the next 10 minutes laying down at my feet every time I stood still. It was hysterical.

Crazy cats.
Pissed in the corner by Verdant Earl at 10:33 AM

wow, you weren't kidding on his size. big boy! Our big guy likes to flop down on the floor and look up and us and say 'mrrooww?' but if you lean down to touch him he runs away.

So you mean you're not going to post about the time you took me to be groomed??? Fine then.

As I sit here reading these comments, Syd is asleep on my foot. My foot, of course, is asleep as well because, well...he's large.

Diva - Syd is a love-bucket. He doesn't mind being picked up and cuddled 99.9% of the time. Sammi, however, refuses to be picked up. She hates it. She also hates me working on the computer. Constantly bothering me to pet her. Not pick her up, just pet her. Cats!

Kat - There's a brazilian joke in there somewhere. I must be off my game.

arent you allergic to cats?

I used to be. Especially short-haired cats, but my allergies seem to have evolved over the years.

thats a big boy. glad he was trying to make up to you.