This is going to be a bit old for some of you. I've already told this story on both ajooja's and Liz's comment pages. Just yesterday on Liz's site, in fact. I may have even blogged about it in the past, I dunno. Too lazy to look back at my previous posts. It has to do with my disgust with just about anything that is or can be mistaken for a rodent. In this case, prairie dogs. Blech!

I have this one friend from High School that I still keep in touch with. He and his wife life fairly close to where we grew up in a nice neighborhood. My friend always liked animals, but he was allergic to both cats and dogs so they never got a pet. He did, however, maintain a weird relationship with a squirrel that lived in his backyard.

This "thing" would hop onto his porch and knock on the sliding glass door to be fed. My friend would grab a handful of seeds or peanuts or whatever and head to the back door to feed the animal. Out of his hand! WHILE PETTING IT!

I never saw anything so disgusting in my life. Squirrels are vile, loathsome creatures that are only made "cute" because of their bush tails. A friend of mine had one that lived in her backyard that either A) was diseased or B) got into a squirrel fight because it had lost all the fur off it's tail. It looked like a yard rat. Seriously. Back to our story.

Eventually the squirrel moved on to greener pastures after a year or so. My friend was a bit devastated. I think he really missed his Dr. Doolittle moments with the little varmint.

Fast forward a few months later when I am over for a visit. We are hanging out in the kitchen (always the best hangout room) when I spied an empty cage sitting open in the corner of the room. Looked too small to be for a dog. Maybe a cat. Who the hell keeps a cat in a cage? And what, if not a cat, lived in there and why was it not locked up? I had to ask.

"So, what lives in that cage over there?" I questioned?
"You've never met Newman? That's right, you haven't been over for a few months" my friend replied?
"What's a Newman?" seemed like the logical thing to ask.
"Newman is our pet prairie dog." he responded. "Come on, you have to meet him. He's in the living room." Seems his wife, sensing he missed his squirrel, bought him this beast as a gift a month or so beforehand.

I have to admit I was a bit terrified. What the hell were they doing with a rat-thing running loose in their house? We walk into the living room and there it is. Sitting on the couch looking out the window. When it noticed us it, well, er, how do I describe its' movements, hopped/shambled/ran over to greet me. My terror increased exponentially.

Despite all talk of how loving, gentle and social these creatures were, it still looked like it had a rat-face to me. I made them, and don't hate me, cage that fucker for the rest of my visit. It gave me the hee-bees. I felt the need to shower immediately upon leaving them.

They look upon my disdain for their "pet" with alot of humor. I admit that my disgust at their living companion is a bit harsh and illogical, but fer crissakes...it's a glorified fucking rat! So, naturally, they take every opportunity to increase my pain. Like sending me a Christmas card every year with his photo.

This year's version came in the mail yesterday. Here is the little fucker. 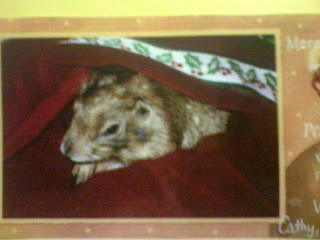 I don't have enough words to describe how much this sickens me. Especially in this pose. He is looking way too much like Willard for my liking.
Pissed in the corner by Verdant Earl at 8:25 PM

i learn something new about you STIL, every day...

Yuck. I'm with you, man. I'd have a difficult time going to their house anymore.

I've tagged you for a Music Meme if you're up for it...

oh just you wait till Liz reads this LOL! Ask her about her rats.

btw your friends are funny. I had a boss once who hated cats. With a passion. So I used to hide pictures of cats all through his work, coat, briefcase, wherever. And I laughed out loud while doing it.

Paige - Thanks. I'll check it out.

Kat - My friends suck, but the cat thing is funny. See, if it doesn't affect me its funny.

Yes - Earl - I was thinking; why didn't I ever get a prairie dog. I had two rats. They were darling. But a prairie dog - that would have been something.

I am also known in some circles as the squirrel lady - I've nursed many an orphaned squirrel with a bottle and raised them to take over the world.

PST - Kat, love the pictures of cats in the pockets. I may have to steal a variation of that for my next string of practical jokes.