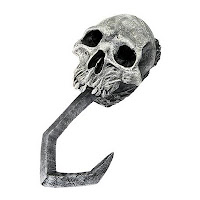 I love a good urban legend. I really do.

Something that's meant to throw a good scare into us. Whether it's watching out for the guy with a hook instead of a hand terrorizing kids making out down by the lake, or being careful not to eat Pop-Rocks with any kind of carbonated drink. The best urban legends give our inner twelve-year-old the chills or the thrills. The cheapest kind.

Then there are the urban legends that make no sense to me whatsoever.

Case in point: Yesterday, Gia was telling me about one of those forwarded emails that we all get. I'm sure you've either heard of this one or received it yourself from your mother or someone equally gullible. It was about the actor Lee Marvin and his time spent in the military. The email claimed he was on The Tonight Show and he told a story about how he was injured at Iwa Jima in WWII. Carson called him a hero, but Marvin told the story about the bravest man he ever knew...a real hero. His sergeant, who saved him and his entire platoon by drawing the enemy fire to himself. The man's name was Bob Keeshan, or Captain Kangaroo as the older of us kids know him.

Nice little story, right? The email then went on to talk about how Fred Rogers from Mr. Rogers' Neighborhood was, in fact, a former Marine sniper who had served in Vietnam and who had several dozen confirmed kills to his credit. His trademarked sweater was actually used to cover tattoos that he had gotten while in the service. Hard to believe, right?

That's because it's all bullshit.

Well, most of it. Lee Marvin did serve in WWII, but he was never at Iwa Jima having been hurt earlier in the war. And Bob Keeshan also served in the Army in WWII, but he joined up too late in 1945 to be deployed overseas. Everything else? Bullshit. Especially all that crap about Fred Rogers, who was pretty much the furthest thing on Earth from a tattooed Marine sniper with a couple of dozen confirmed kills.

Now, what's the purpose of a urban legend like these? It's just a lie or several lies about someone famous. Or someone who used to be famous. I heard these urban legends and I responded with a big fat "huh". Why would somebody even care to make something like this up? Is there some evil genius wannabe cackling away in his secret lair about sending that first email out? "It worked, Mother...hehehe...it worked!"

I have no fault with people believing this stuff. Gia believed it. Or she kinda believed it, but questioned it enough to tell me about it. And it took me all of 10 seconds to find out that it was all crap on Snopes. I just don't understand the purpose of making this shit up in the first place.

I hate a shitty urban legend. I really do.

Bob Keeshan must have been pretty bad ass if he made it up to the rank of Captain.

Adam - He was also the first actor to portray Clarabell the Clown on the Howdy Dowdy Show, so maybe he earned that rank in clown school.

Regardless of service or tattoo status, Mr. Rogers was a stone-cold killer... you could see it in his eyes.

Dave2 - I never really watched the show. I was more into The Electric Company and Zoom. King Friday XIII kinda freaked me out.

There's an urban legend going around the interwebs that you have a va-jay-jay.

Slyde - If I did, I'd never leave the bedroom. Huh, what?

I got that email myself about 2 weeks ago.

For the record, sometimes snopes is full of shit, too.

Heff - Really? I always thought it was more like FactCheck.com. Purely impartial. What have you seen that they have incorrectly portrayed?

so, what's a really good urban legend that you like then, Earl?

Also, when i come here - i feel like your new Green Dude is unimpressed that i don't eat enough vegetables.

Diva - My Green Dude IS unimpressed at your lack of vegetables. ;)

As for urban legends I love, I dig the horror ones. Like the ghost kid pushing you off onto the train tracks, or Halloween decoration of the hanged man that turned out to be real.

My husband's aunt sends me crap all the time, I check it on snopes and send her the link, saying it's wrong, and then she's just all confused and can't believe it isn't real.
Makes me want to strangle the bitch.

Sybil - My mother sends me stuff too. Ugh.

what sybil said. it is like most of my family gets pissed that i send them the snopes link, but here i am all pissed that they refuse to spend the 33 seconds checking their shit out. grrrrrrrrrrrrrrr!

and that new banner guy kinda freaks me out. imma start an urban legend that he grinds up and eats little children who don't like broccoli.

What if Snopes is an urban legend? Then what?

Should I get a towel? Cos I'm pretty sure the joke is on us my friend.

On an unrelated note, have you seen that new Apple TV? Call BP, cos that shit is pretty slick.

Becky - that's actually true about the banner guy. Spread it around.