Psst - Hey! Look over there at the right. Just wanted to remind you all of the Jack-o'-lantern contest. There's a link and a graphic and everything! Tell your enemies! - Earl

On a scheduling note, the second Monday of the month should mean a movie review here on The Verdant Dude as outlined in some previous post. It's been two months since I made that pledge and it hasn't happened yet, but only because of circumstances beyond my control. Last month there was a holiday which pushed my movie review to the third Monday in September. And this month I did a movie review last week as part of the Final Girl Film Club, and I haven't watched another movie since then. Yes, being lazy is a circumstance beyond my control.

But enough self-flagellation, I have something else to talk about. And it is kinda movie related. Specifically, this: 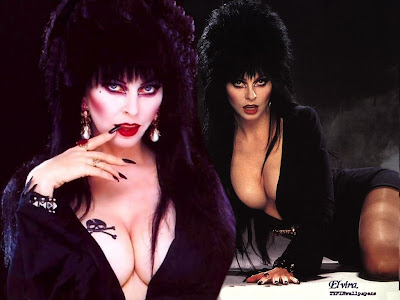 Hubba hubba...
Every since I was a young man, I've had a heart-on for Elvira and her low-budget hosting gig on Movie Macabre. Throughout most of early-mid 1980's, I was glued to the tube late Friday or Saturday nights when our local television station broadcast her show. Gloriously awful B horror flicks interspersed with snarky, wicked commentary from the Mistress of the Dark. And Cassandra Peterson, gothed-up in her punk/vampire/valley girl outfit, was awful fun to, um, look at. Yeah.

Like all things from our youth, Movie Macabre came and went. So I was stoked to the max (really?) to find out that Movie Macabre hosted by Elvira was coming back for another round of titillating (hehe) horror commentary.

Here's the problem. I can't watch it here in the NYC/LI area. If I lived in Birmingham or Boise or Kansas City or Las Vegas or well...just about anywhere else in the country, I could watch it. Just not here. In one of the largest metropolitan areas in the nation. Oh sure, on her site they say that it's being broadcast on WPIX.2 on Fridays at 2AM and Sundays at 1AM, and WPIX is a local channel here. Channel 11 on just about every local cable company's dial. But it's that ".2" at the end of the station's call signals that worried me. I had never heard of WPIX.2 or 11.2. Just how the hell do you get a channel that's in between channels 11 and 12?

Simple answer...you don't. Or I don't. Whatever.

Channel 11.2 is a digitally broadcast channel, but it can only be picked up with an antenna. One of those old TV antennas that we all used to need. And not just the rabbit ears that you could put on the top of the television set. No, you need to buy a real new-fangled one that goes on the roof. So you can access the digi-channels that are only broadcast this way.

Well, I'm not doing that. Even if I did that, I still wouldn't know how to tune into a channel like 11.2. Maybe the antenna comes with some kinds of special tuner. One that gets the "in between" stations like 11.2. I don't know. Do any of you out there watch television this way? Am I missing something?

All I know is that saying that they are broadcasting the show in this manner is like not even broadcasting it at all. At least for me. This just isn't an option.

Which is a shame. Because I really, really, really would like to turn back the clock and watch Movie Macabre once again. Elvira rules so fucking much. Like...totally.

Oh please please tell me someone will take pity on us and put the episodes online!!!!

Poppy - I haven't seen them anywhere online yet. But I'll keep looking.

RW - Sure, she was broadcast all over the world. That's what you meant, right? ;)

WTF.
I just got an error 503 Service Unavailable.
Just so you know, it was a very detailed description of my lesbian fantasies about Elvira back in the day.
Stupid error!

Sybil - feel free to blog about it in the future. We'd all like to hear about it. :)

I think I just figured out what Donna's Halloween custome for this season is going to be....

(boobs do THAT to me)

Oh I certainly had a heart-on for Elvira back in the day as well. Phew.

Heff - I'm glad I could be of service. I'll be REALLY GLAD if you post pictures. ;)

how much face work has she had to look EXACTLY as i remember her from all those years ago?

yes, earl. she isn't all boobs and actually has a face.

Becky - I think most of that is done with the makeup. She's approaching 60 (next year!). And that pic up there is an old one. I haven't seen her in the Elvira getup lately. And yes...I love boobs. But I love everything else too. Just boobs a little more. ;)

Every time I see Cassandra Peterson, I have to remind myself that she is a sort of national treasure. Besides supposedly having slept with Elvis, she was also sent to the ER back in the day, when Tom Jones attacked her with his 'Pocket Monster' and she just couldn't take the beast.

I wouldn't be too down on the channel configuration. We get the digital channels through cable in here in Phoenix, you just have to set the auto tune on the old HDTV to seek them out (assuming your HDTV has an up to date tuner). Antennas are not usually required.

Bruce - I've tried everything. We just can't get them here.

If your HDTV doesn't have an ATSC tuner, you can pick one up for something like $40. And you don't need a roof antenna. Check out antennaweb.org and you can see exactly what kind of antenna would be needed for your location and that specific channel.

That being said, I do think it's a little surprising that your cable doesn't carry the extra channel somewhere.

Ren - I may have to check that out. What's REALLY surprising is that I live in the #1 media market in the country (or #2 if LA is bigger), and the regular WPIX affiliate isn't broadcasting the show. Yet all over the country, it's being broadcast on regular local TV stations, not digi-channels. Everywhere basically, but here. I don't get it.