Just because we are done with the Halloween season, doesn't have to mean I'm done with horror flick. Nope, I watch those year-round. The latest and one of the greatest is this nasty little flick called The Shrine that I found on Netflix.

The film starts off with a young man who appears to be ritualistically killed by satanists or something.  It's a great opening that brings back memories of those old 60's and early 70's Hammer films, the non-vampire ones. Actually, the entire movie is like a love letter to those old satanist cult films that I loved so much as a kid.

A journalist and her two friends go to Poland to see if they can solve the mystery of the missing young man who was killed in the opening scene.  They find a backwards town that could have existed at just about any point in time, but would have fit right in with those Hammer flicks I mentioned. And the townfolk don't want these Americans nosing around in their business.  But there is this weird stationary fog that has settled over a part of the forest and they want to investigate it, so they do.

What they find is a creepy ass demon statue holding a human heart. Then shit starts to get real, or unreal to be more specific. I'm not going to give any spoilers because I don't want to ruin it for you if you intend on watching it, but the film really kicks into high gear after that. 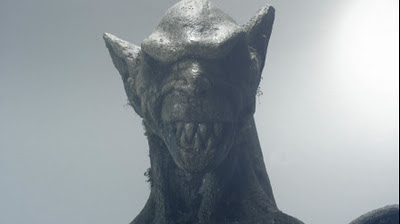 Oh, and the filmmakers decided against giving us subtitles for the parts in Polish. This way we, the viewers, are as much in the dark as the American characters in the film. It's unsettling in a great way.

It's one of those small horror flicks that actually exceeded my expectations.  Nothing historic, you understand.  But it's pretty damn good.  Check it!
Pissed in the corner by Verdant Earl at 12:01 AM

Ooooh - this one sounds pretty cool. Might have to heck it out! Czech it out?

Slyde - This one might not be for you. I know the kind of horror you like, and I'm not sure this one is it.