I've always wanted to be a child of the 60's. People who grew up in the 60's always seem so interesting and cool. I've got only the most modest of claims to that title. I was born in the late 60's, but I guess I'm more of a child of the 70's and the 80's. No JFK to look back on with a sense of awe and community service. Nope. I had Reagan.

Gia and I are the same age, but we experienced the 80's in much different ways. She certainly had a lot more sex than I did back then, but that's a whole other story. My musical tastes ran toward the alternative scene, modern rock or new wave ultimately leading to punk and ska. Gia was/is a metal chick. Everything from speed metal to glam rock. She loves that shit! Not me. Guns and Roses was about as metal as I was willing to go. Although I used to love MTV's Headbanger's Ball and that was mostly metal. I liked it for the comedy quotient more than the music. We used to try and guess how many of the videos played during the ball would show one of the metal guys in a straight jacket. That seemed to be a pretty common theme.

Lately, Gia has been getting into Black Metal from Scandinavia. If you don't know what it is, well...you're probably pretty normal. It started as an off-shoot of thrash metal with bands from the UK like Venom, and it is typified by ultra-fast guitars, incomprehensible singing and, um, Satanism. Well, not all of it is satanic, but a lot of it is. The occult, war, suicide and Tolkein are common themes as well. I really don't get it, but it makes her happy. Mostly the absurdity of it all is what does it for her, I think. I hope. ( Note - Gia is not nor has ever been a Nazi, pagan, Satanist, church burner or occultist. Just thought I would clarify. - Earl)

So we spent Saturday afternoon buying a bunch of stuff from iTunes to support her Black Metal habit. We also bought some stuff for me (Patti Smith) and some Led Zeppelin for the both of us. I found this online radio station called Black Metal Radio that we had a yabba-dabba do time with. It was campy fun. Well it was until I started reading the bios of some of the bands. Some hardcore freaks in there, let me tell you. The main dude of Burzum actually killed a guy from another Black Metal band and burned down some churches.

So I'm laying there on the bed looking up everything and anything to do with Black Metal when Syd decided to use the laptop as a pillow. Or maybe he just got curious and wanted to see what all the fuss was about. 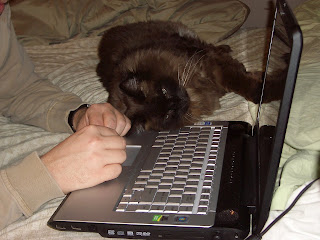 He wanted to do some web-surfing, so I steered him towards this blog. I think he enjoyed it. He was purring, so that had to mean something, right? 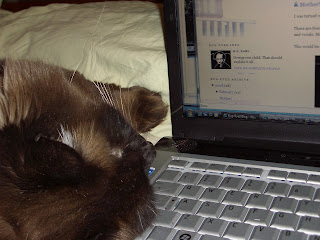 Then I went back to the Black Metal radio station and we listened to a song by Dimmu Borgir. You can sorta see the demonic cover of one of their album's on the screen if you try hard enough. It's a little harder to see, but Syd is rocking with a couple of his claws out forming the classic headbanger's devil's horns with his big paw. He loved the Black Metal! Although he preferred to call it "Bleck Meh-tal". Something about a Norwegian accent, I don't know. 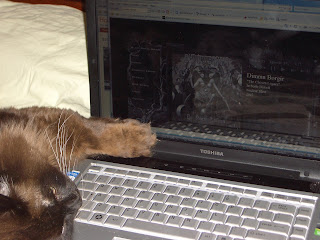 That knocked the poor guy out. Too much excitement. So he had to rest again. This time by crashing out on top of my legs. It's a little cute when there are small, but Syd is pretty large and my feet fell asleep shortly after this shot was taken. You can spy our girl Sammi by my feet as well. She likes to stick close by as well, especially with all the Black Metal playing on the computers. Scary stuff! 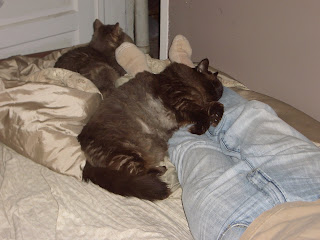 It was during this nap the Syd had his very first Black Metal nightmare. Syd has nightmares all the time. He will jump up from a dead sleep with a mini-growl, run over to one of us, and then bite us either on the hands, feet or head someplace until he actually wakes up. It's kinda funny. He really has no clue where he is for a few seconds. Then he figures it out, stops biting us and he goes to get a few mouthfuls of cat food to settle his stomach. Seriously. He does this all the time.

He woke up from this nightmare, maybe something from a Gorgoroth song, and he bit the nearest thing available. My foot. We know that it was Black Metal that did it because it took him about 30 seconds to fully awake from the nightmare. Satan compelled him. He just sat there with my foot pinned and his fangs sunk into it. I dared not move lest I incur his wrath. So I sat there, taking it, talking him down from his satanic high. He finally let go, stretched and jumped down to get a bite to eat. And that was our Saturday afternoon. 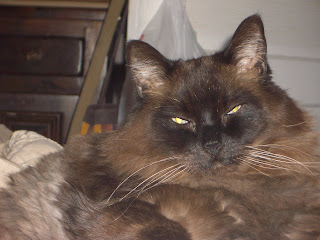 I love the Meh-tal. Love it, love it, love it. Bleck Meh-tal rules! Mwah-ha-ha-ha!!!!
PS - Just because all the Canadian kidz are doing it, I made a meez as well. The hair isn't long enough and the beard is way too long, but that's pretty much how I like to dress. Cargo shorts, sandals and a Hawaiian shirt. It's way down there on my sidebar for the curious. Enjoy!
Pissed in the corner by Verdant Earl at 1:10 PM

A story so good, I read it out to SLW then showed her the pictures.

So what you're trying to say it Gia has crap taste in music?

I've never really been one for heavy metal either..

Poor cat! Must have suffered through it. Got knocked out by the impact and had a terrible nightmare as a result.

See what happens when you play some of your music. Then try the experiment on other cats.

Present the results to Gia and tell her she's killing your pet with that racket!

Elise - Gia is so perfect in almost all the other ways that I can't say anything about her taste in music. Wouldn't be fair.

I love Syd. Named after Syd Vicious was he?

Gia is not nor has ever been a Nazi, pagan, Satanist, church burner or occultist. Just thought I would clarify

You obviously married into boring and conservative, huh?

Well i was born in '53 so the start of my teen years was in the late 60's. It was no big whoop. Drugs were better & cheaper but that's all I remember.

Not that I'd know what they cost now or anything because I don't really. I'm just saying, you know, I would imagine with inflation and the lowering quality of life and all...

Miss - Welcome! And he's occasionally Syd Vicious, but mostly he's Syd Licious! Um, as in Delicious. I'm not in charge of naming the cats.

My brother in law would love that web site. His band plays a lot of metal. The heavier the better. System of a Down type o' metal is about as heavy as I get. High pitched noises make me angry.

That was funny... and just so's you know we can see you in the reflection of the laptop... just kidding. But that's more of Earl than we've ever seen.

That cat is awesome. But I have to say that if I had a cat who bit me... it might just go to meet satan. Actually - my old room mate had a cat who actually WAS satan...

Kat - Sorry to hear that about your brother in-law. Metalitis is a damnable disease.

Liz - Not true. You've seen my bare leg. In fact you can see it right now...over on my sidebar. But I know what you mean. And no making fun of the cats...THEY WILL SUFFER YOUR VERY SOUL!!!!!

Wow! i never woulda thought that Gia was a metal head. Seriously, the vein i thought you were taking was: "i listened to the alternative scene and modern rock, punk and ska... and Gia listened to Duran Duran and Tears For Fears"

Have you two watched Metal: A Headbanger's Journey? So good and so very informative. Plus, the dude is Canadian. WOOT! Seriously, they should teach this stuff in School! What are the kids learning? "Go Tell Aunt Rhodie" bah! another example of where the education system has failed the children... WON'T SOMEONE PLEASE THINK OF THE CHILDREN!! lol

also, your kitties are so cute and fuzzy, and hardcore.

I did not know that cats had the ability to sleep attack. I don't know if that is a good trait to have in the wild.

Diva - Gia is nothing if not metal. We'll check out the Metal Journey...Thanks!

TK - We all have our sleep disorders to deal with...even cats.

Slyde - Hey, I'm not in charge of naming the cats. That's a Gia thing.

You know the theory that if you gave a thousand monkeys a thousand typewriters, in the end they will type Shakespeare.

By accident, of course ;)

My experiments with cats is that they just slip and trigger the odd bit of truncated gibberish.

I think you would love Metalocalypse.

Do anything for Deth Klock