You know my cat Wolowitz, right? 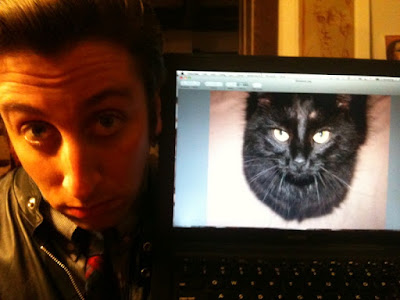 He's the cat on the right, not the cat on the left. The cat on the left is Simon Helberg. And he only plays a cat named Wolowitz.  The cat on the right is the real deal.  I still dig Simon Helberg though.  He's cool in my book.
But Wolowitz the cat?  Yeah...that's another story.  One that is rife with love and annoyance. Love, because, well...he's lovable.  But annoyance, because well...he's annoying. Sometimes.  Like when we decide to enjoy a beautiful late afternoon with a cocktail or two on the deck overlooking the harbor.  He wants to be out there with us, so he cries...like a little girl. Okay, cries might be a bit of a stretch.  But it sounds enough like crying to make us feel guilty.  So fuck that guy.
And he has this thing that he does when he wants attention.  He strolls up to Gia's work desk, jumps up and starts to scratch the cork board that she uses to organize her life.  He doesn't do it because it's fun.  No.  He does it because he knows it annoys us, and it will get us off our asses and over to him to brush his coat.  Because he likes that.  And hates us.  Or so it seems.
So yeah.  Wolowitz.  He's a dick, but we love him.
Pissed in the corner by Verdant Earl at 12:01 AM

What an odd coincidence..

Years ago, i pre-ordered your tombstone and thats the very quote i had inscribed on it.

this would be why i have dogs.

p.s. i love that photo

Slyde - That, actually, would be purrfect.

Becky - Dogs can be dicks too. I've seen it happen.

Such smart little fuckers, though. Our Foo Fi LaRue knocked a glass bowl with two tomatoes in it off the counter last night - you can see small scratches and bite marks in the tomatoes. I don't know how the bowl didn't break.
It's a lucky thing they're so cute.

If I had a dollar for every time I had that one hurled in my direction...

Yeah, not a pet guy. We're done with cats and dogs. But my wife has a parakeet. I'd like to fry him with some barley and a little half corn on the cob like the fucking little quail bait he truly is...

RW - I hate birds. I have a client who has birds, big ones too. I try not to go over there too often. Fucking birds.