I was talking about this the other day with a friend of mine.

Hell, he was so cool while with Power Station that he even made a couple of the clowns from Duran Duran look cool themselves.  No offense intended for those of you who like Duran Duran.  OK, maybe a little offense.  I'm just saying that the guy absolutely exuded cool for a brief period of time there.  Cool with a capital "holy crap, those women dancing behind him in that video are really hot".  In a distant, robotic, European kinda way.  But hot, right? 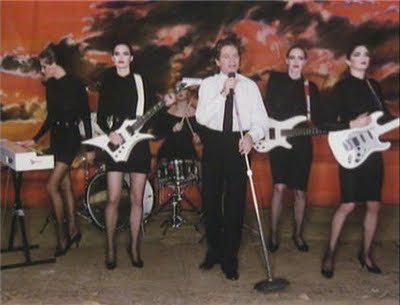 It's not like Palmer came out of nowhere.  I remember some of his solo stuff playing on MTV prior to his breakout turn with Power Station.  "Looking for Clues" and "Johnny and Mary" from his Clues album were early MTV staples (kinda) in 1981.  Check 'em out below:

OK...the first one is kinda odd. White hallway with a bunch of dudes dressed up in animal heads.  Seems like a nightmare straight out of The Shining.  Ugh...shivers.  The second one is odd too.  In an artsy, European kinda way.

But Palmer?  He was cool in those videos.  Not nearly as cool as he would seem in several years, but you could see it coming.  Almost.

From there he did his Power Station stuff and Riptide.  Then Heavy Nova came in 1988 and he copied his "Addicted to Love" formula for the video for "Simply Irresistible".  Suddenly he wasn't so cool anymore.  After that, well...he seemed to lose his cool completely.  I don't know if he actually did, but it sure seemed like he did.

I have no idea where this came from or what I'm trying to say.  I guess it's that "cool" is a tough thing to define.  And that it's fleeting.  That's what happened to Robert Palmer.

But back in the day?  He was the bitch's bastard!*

*Stolen gleefully from Jack Warden in Things to Do in Denver When You're Dead.  That starred Andy Garcia.  He knows a thing or two about seeming like the coolest guy in the world.  For a fleeting moment, that is.
Pissed in the corner by Verdant Earl at 12:01 AM

Well, the video you have posted there is not the only video Robert Palmer made for "Looking For Clues"...THIS is the one I remember seeing in the early '80's, and it kinda implies he came from a not too cool a place as well: http://www.youclubvideo.com/video/82600/robert-palmer-looking-for-clues

Which, in some ways, I think, makes his achieved coolness perhaps a little more impressive.

yeah, i used to think he was cool.

until i bought the SIMPLY IRRESISTIBLE album back in the day. The B side has songs with him Yodeling on it.

Try to drive around in your firebird with THAT blasting out your car window.....

p.s. your like to the dog guy in the shining blowing the other guy is not a valid link.

i think i just read that you thought he was cool because he paid some hot broads to stand behind him and look good while pretending to play instruments.

it is way too early for this crap

Best song was "Bad Case Of Lovin' You".

(In MY opinion, of course)

Paticus - Wow...that's even worse than the one I posted!

FWIW, I liked the Power Station project. But I also am a DD fan. Palmer died too soon. He was the shit.

I remember when Eddie Money was cool. That was brief, too. But look at him now...

And I'm with Heff on this one.

Marty - Oh I dug Power Station. But not Duran squared.

Steph - We here on Long Island feel it's necessary to call him "Long Island's Own Eddie Money". Or, er, we used to...before he started playing junior high schools and stuff. ;)

I was pretty bummed with Mr. Palmer passed away last year. Along with Boz Skaggs, he sort of defined that cool hip, I wanna grow up to be like that guy image. And that sort of sticks with you throughout your life.

I saw Robert Palmer in concert, in the round, front row about 10 years ago. He was good. It wasn't so much cool as it was he had a style and he stuck to it, and he was good at it. Very good.

He was one of those rare musicians, that when he performed "Addicted to Love", or "I've Got You In My System"...he sounded BETTER in person that on the recording. Cool Indeed.