Got a comment today from a post from 3 years ago that made me really happy for some reason.

A million years ago (or back in the 80's), I used to read National Lampoon every once in a while. And back then they had a feature that may or may not have been a regular column called "Dear Trubba Man"

It was a fake advice column that they ran with a picture of Joe Frazier, I believe, as Trubba Man.  A picture kind of like that one on the right.  Maybe it was Ken Norton, I dunno.  But I think it was a boxer at the very least.  It wasn't the smartest feature published, and in retrospect it was probably pretty offensive to African-Americans.  But for some reason, I have never forgotten it.

A typical letter would read as follows:

Dear Trubba Man,
My girlfriend recently broke up with me and she threw all of my clothes out on the front lawn. What should I do?


To which Trubba Man would most likely reply,


If it were me, I'd kill da bitch! But seeing as how you seems like a wussy kind of guy, here's whatcha gonna want to do.  Blah blah blah.

And then he would go on about exacting his revenge in some funny/demeaning/stereotypical way.  It was mostly funny because of the picture of Joe (or Ken or whomever).

Does anyone out there remember this feature from National Lampoon? Am I the only one?  I think Trubba Man would have had a field day with the Michael Jackson funeral.  Seeing as he was a wussy kind of guy and all.

And in totally un-related meanness, which slack-eyed monster is more awful to look at: 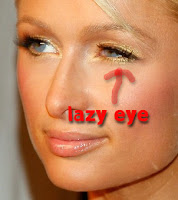 Forrest Whitaker or Paris Hilton?  I'm choosing Paris. I'm a hetero white guy, but I would totally stick it to Forrest given the choice of the two.

Because she makes me ill.

Pissed in the corner by Verdant Earl at 11:03 PM

missed that column, but then again, i was never a national lampoon reader...i'm with you re paris hilton...bless her heart, what a drudge! xoxoxox

the only thing i really remember about the old Mad magazines was that i used to flip right to the back and fold the back cover into 3 parts to see the funny picture...

do they even still publish that mag?

Paris. At least Forrest has talent.

Savannah - She is awful.

Slyde - National Lampoon, not Mad. And yeah, I believe they still publish it.

Paris. What a sick bitch.