Well I mentioned a few posts down that I had a long weekend. Actually it's turning into a long week, but that's besides the point.

My youngest sister is on vacation at Disney in Orlando with my nephew to celebrate the little brat's sixth birthday in a few weeks. Uncle Earl, being the great guy that he is, is stuck watching her 3-year old daughter until this Thursday when they return.

Don't get me wrong, I love my niece. Love her, love her, love her. She's is the most adorable thing and she has a way of talking that linguists can't even figure out. She's the best. She also needs more attention than ANYONE I have ever met on the planet! With most kids her age (she will be four in the fall) you can just sit them down in front of the TV with some Barbie movie crap and they will become catatonic. I'm not saying that's a good thing, in fact, quite the opposite. But sometimes you need a little "me time", man!

Not with this kid. She is constantly up your ass. "Play a game wid me", "Let's go fow a wok", "I wan you to sa-pin me" and it goes on. That's last one was spin, by the way. She can't really say words that start with "s" as they were meant to be said. Sleep becomes sa-leep, story becomes sa-tory, and smell becomes sa-mell. You get the drift? Actually, it's kinda cool. Like she invented her own form of pig latin. My sister and I have entire conversations where we substitute our "s" words for her "s" words. It's fun. Try it!

Today she is at day camp for a few hours so I can get some work done (and yet I'm typing this), and then it is beach time where she tries to swim out past anyone else. Yeah, that's fun! Especially considering my previously mentioned fear of sharks on Slyde's blog. Oh, I should mention that we are going to a bay beach, not an ocean beach so there aren't any sharks in the water. But there is seaweed and jellyfish and either touching me will induce a shark attack-like high-pitched scream! Good times!

Is it Thursday yet? 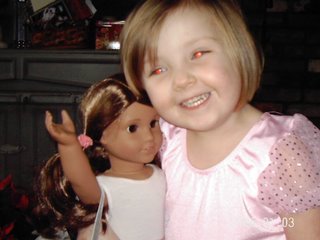 Here's a not-so-recent picture of the little rug-rat. That's not flash-induced "red-eye", by the way. That's the demon who dwells within her, and its trying to get out. Help me!
Pissed in the corner by Verdant Earl at 9:49 AM

Is that a princess dress up gown she has on? I bet she tries to get you to wear the dress up gear too and I bet you do...don't you Uncle Earl.


And no. It's Tuesday.Mwuah ha ha ha haaaaaa!

No, but for some odd reason she is obssessed with shoes. She is constantly walking around in my sandals saying "I'mb weahing you sch-oos".

I, of course, prefer adult size dress up gowns when I cross dress. Thank you very much!

She needs even more attention than ME?

P.s. of course she loves shoes... you and your WHOLE family have a serious foot fetish...i have the recipt to prove it.

How sweet - you babysit! Now you have some idea of what we parents deal with daily.

Oh, I know. My sister left her deadbeat husband a couple of years ago so Uncle Earl gets to spend lots and lots of his free time babysitting.

Now if they would only listen to me once in a while....

Slyde - you really don't want to start a war with me. You've given me waaaay too much ammo over the years. I do like a shapely foot, though.

Hey earl.
It's wednesday!
aka NOT thursday!

Thanks for the update Kitty!

What would I do without you (he asks dripping with sarcasm)>

Why, sit in a pile of your own drippings in a sexy negligee and pumps no doubt...oh wait, you already do that don't you?

*note* there is absolutely no sarcasm whatsoever contained anywhere in this message. Not at all.

I'm sorry...missed everything after "your own drippings".