Do cats dream of world domination? 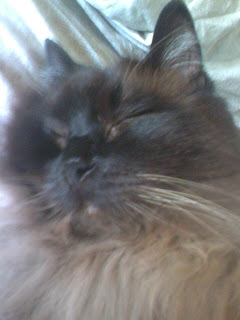 There is a picture of the elusive Syd, passed out on the bed. Obviously dreaming of important things.

It reminded me of a great issue of Sandman, a comic-book written by Neil Gaiman. The series was about a family of eldritch, god-like beings called The Endless, but the main focus was on Morpheus, or Dream, who controlled the Dreaming. The series had a real beginning and end to it with most of the issues following along that plot line, but occasionally he would do an issue that seemingly had nothing to do with the rest of the series. Other than the subject matter of dreams, that is.

This particular issue was called "A Dream of 1000 Cats". In it, a prophetic cat told the tale of how cats came to be the pets of humans. You see, in ancient times, large cats were the dominant species on the planet, and humans were very small and they served the god-like cats.

Until one day when a human convinced 1000 other humans that if they dreamed that they were the dominant species and that cats were merely pets, then reality would be changed forever and history would be changed as well. Changed, that is, until 1000 cats would have the opposite dream, changing reality back to the way it was in ancient times.

So this prophetic cat travelled from place to place in an attempt to convince the cats of the world to dream of such a world, and if 1000 had the same dream then they would become dominant once again.

One cat in attendance dismissed the notion, because whoever heard of 1000 cats doing anything alike at the same time. Yet one young kitten took the story to heart.

That night, while she was sleeping, her owners came upon her and commented "Awww...isn't she cute when she sleeping? I wonder what cats dream of?"

Great story! And watch out for those tabbys. They will stop at nothing until they rule the world once more!
Pissed in the corner by Verdant Earl at 3:19 PM

i dream of world domination all the damned time. ;p

i gave my kitties away when I moved to CA. I had a need to be free of them robbing the secrets from my dreams.

ayea... that and they hogged the bed. LOL.