A request, then some cat pics

First off...whenever I talk to Slyde about the blogs we enjoy, he always says that he wishes he had more fun stuff to write about. So he posts YouTube videos instead.

I'm here to tell you that it's just not true! He has tons of funny anecdotes and stories from our wacky past that he could write about it. He is either A) too embarrassed about this stuff or B) too lazy to write about it.

Methinks it could be a combination of the two.
So I am asking you, dear readers, to let me know if you would like me, your humble servant, to tell one such of these tales for the poor lad. Well...it's actually three tales, and it involves Slyde, Slyde's arch-nemesis, Peter David, myself and comic book conventions. Interested?
I promise to not place any kind of blame or shame on him. Well, maybe a little...but it's funny stuff, kids! So let me know in the comment section if you would like me to pull the sheet back a little on our good friend Slyde...to reveal the inner-Slyde, so to speak.
Now for some kitty pics: 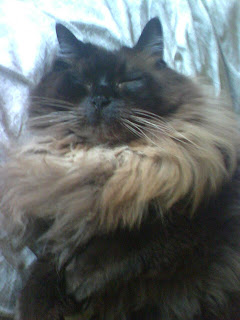 Here is another shot of Big Syd sleeping away the day. He is literally starting to grow hair on top of his hair. Sometimes when he is sleeping he tucks his face into his under-mane (?) so that you can't even see the little fella. 1...2...3....awwwwww! 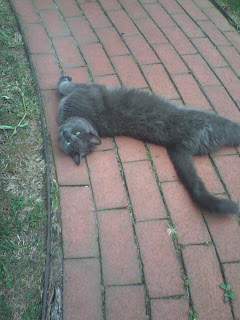 This pretty, little kitty is named Mina. It's short for Thumbelina (not sure how that becomes Mina, but OK), because she is a Hemingway cat. Six toes, ya know. She is one of Gia's mom's cats, and this is her favorite place in the world. Don't be fooled by her come hither stares. She's a killer. All the birds and chipmunks in the area fear her. Even hanging bells on her collar doesn't stop her from her critter rampage. She is Death incarnate...in a grey coat.

Pissed in the corner by Verdant Earl at 4:24 PM

Bring it. Bring the story.

no one needs to hear those stories......

go on I'm listening. I like cats for breakfast, lunch and tea.
Woof.

you must reveal the stories.

and kitties that are killers have a distinct charm about them, don't they? its in the eyes.