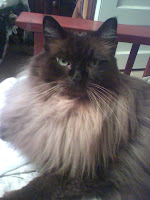 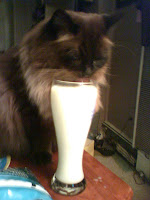 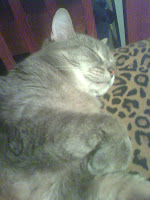 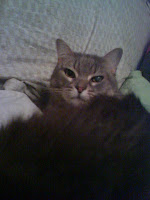 A little kitty cat montage for y'all today. Syd is the big boy up top, looking resplendent in his pre-haircut days. I think these were taken about 4 months ago or so. It was Syd at his hairiest, I believe. He had hair growing out of his hair, it seemed. And he didn't really drink that tall glass o' milk. He just kinda jumped up on the snack table and looked into it. It was very white.

Sammi is the kitty in the second two pictures. I believe I've posted one of those before, but I can't be sure. The large black mass in front of her in the second pic is Syd, of course. They were curled up in the bed together at the time as they so rarely do.

Good news: They've stopped fighting since I last posted about them. Well, mostly. Every once in a while he still gets in her face for no apparent reason besides being a bully. About a month ago I had to separate them after a vicious sounding argument. I picked him up and noticed one of Sammi's nails embedded in his cheek. Well done, young lady! Don't back down to the big boy on the block.

They both have been displaying a massive amount of WKB lately. WKB is Weird Kitty Behavior, for those not in the know. That should be just about everyone since I just made up that acronym. Syd likes to sit his big ass down on the alarm clock by the bed...changing the time, alarm options and whatever with his...ass, I guess. I'm beginning to think that he does it on purpose. Sammi, ever the skitchy (skitchy = not readily available to pick up and snuggle with) kitty decided yesterday was the day to sleep on my chest and neck while I was trying to catch some Z's in the afternoon. I'm guessing that she was trying to assert her bedroom dominance over me in some way. Worked too! I couldn't move for like an hour and a half.

The craziest kitty behaviour (hmm...should it have been CKB?) belongs to Syd's bathroom routine in the morning. Not his bathroom, per se, but what he likes to do in our bathroom. Taking a dump? He likes to lay between your legs and purr. Taking a leak? He likes to sit between my legs and stare up at the golden arch going into the bowl. And Gia got him onto this weird kick a while back where he sits on the toilet while we are in the shower and he drinks some nice "ice-cold" water out of a pint glass until we are through with the shower. Then he likes to lick the water off of our legs after we get out. Truly bizarre! Yet there he is, every day waiting for his glass of ice-cold water on the toilet.

Anyway, I leave you with one more picture. This one is a closeup of one of the flowers on my sister's Christmas Cactus. The remarkable thing about this plant is that is over 70 years old! It was given to my Great Aunt upon the birth of her son and it was in her sun room at that house for the next 70 years until her daughter passed away last summer. We were helping out by cleaning the house up for sale when we came upon this beast. It's huge and I remember it vividly from my childhood. My brother-in-law is a wunderkind with plants of all types, so he was granted custody. This bad boy has had a lot of offspring too. My mother has one in her kitchen that is over 40 years old from a shoot from this very plant. Enjoy! 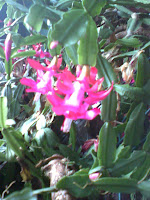 Dead Sexy update: Added an old pic of my tattoo on the sidebar. You know...for the ladies!

Pissed in the corner by Verdant Earl at 4:04 PM

AHHHHHHHHH.
CATS!
Both beauties. Sammi is soo, soo feminine! What a great face.

Dead Sexy!! very nice, what does it mean - is it a family crest?

My cats seem to be suffering from some of the same WKB. Kozmo - the big guy is super cuddly and Cinda - the little girl - is rather skitchy herself, and while they used to be the best of friends, for whatever reason Kozmo has decided that Cinda is his very own chew toy and we are constantly breaking up their fights. the jerks.

i used to have an ancient christmas cactus too, it was my great grandmothers, and then about a year ago my grandma gave me a clipping. Thankfully not the whole thing - which is huge, because i killed it, as i do all my houseplants

Madge - Sammi is very, very lady-like. Also, you can't see it in the pics, but her left eye is glazed over badly. She used to be feral and lost it in a fight with a varmint of some kind. Hence Sammi (as in Davis, Jr.).

Diva - Yes, it is my family crest. The Bird of Paradise is just a bird that I really love, so I did a little mix and match. Came out nice, I think.

My dog also likes to like the water off my leg when I get out of the shower. What a wonderful trick it was to teach her how to open doors...

I can't stop thinking of that picture of you and your sexy leg... rawr!

I love cats. They both look so beautiful. Sid looks like a cat-model!

My cat displays alot of WKB too. She's suddenly discovered the art of sneaking up behind me and bouncing on to my shoulder...

Paige - Syd knows how to open doors too. He likes to open the cabinet doors under the bathroom sink, wait until Sammi gets curious enough to walk into the cabinets, then close the door and run away. He's very devious.

Slyde - Have you finished your tattoo yet, half-a-man?

Elise - Syd knows he is very handsome, but he hates to sit properly for a photo op. We grab a camera and he turns his back to us. Cats!

Love the tat. I will never post a pic of mine... I think.

Um...you didn't just throw a "Princess Bride" quote at me and think that I wouldn't get it, did you?