Nothing too earth-shattering today, but I thought I would share with you the last four photos I took with my cell phone. Coming from a cell phone, obviously, the resolution/quality of these pictures are a little primitive. Good enough for government work, so to speak.

This first photo is a portrait of Gia's uncle. He's a world-class jazz drummer with a list of credits that reads like a Who's Who of American popular music in the last 50 years. He, at various times in his career, has been the regular drummer for the likes of Bobby Darin, Paul Anka and Barry Manilow. He's also worked with Tony Bennett on occasion. Mr. Bennett recently published a book containing oil paintings, watercolors and lithographs. He drew this one of Gia's uncle, and it made it to the book. Very cool! By the way, that's my thumb way down there on the bottom of the pic. Sexy, eh? 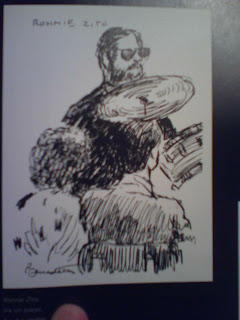 This next one is Gia's sister's new puppy. Her name is Layla and she is about 4 months old. She's a rescue dog, part Labrador Retriever and part something else. I've been trying to figure out what that something else is, but she's mostly Lab. Cutie, isn't she? 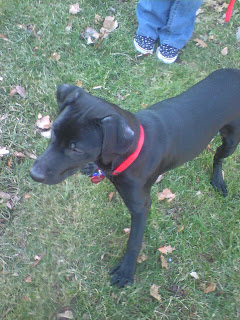 I've seen a ton of vintage Guinness signs over the years. A lot of time spent in Irish pubs will get you that kind of experience. That and an achy liver. But I've never seen the sign below. Apparently, lobsters love Guinness. Go figure. 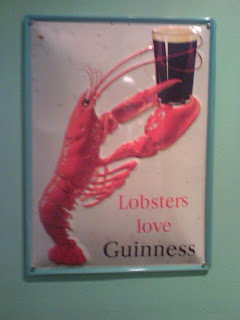 Not going to tell you where I snapped the following pic. It's a little on the distasteful side, and certainly not something currently in fashion. I still can't help but smile when I look it at. And if you look real close in the reflection coming from the overhead light, you might be able to catch a glimpse of me. Nah, just kidding! But I made ya look....hah! 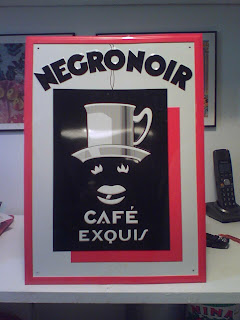 PS - Crazy zombie creaminess over at MovieGrenade! Read it or die!
Pissed in the corner by Verdant Earl at 7:32 PM

Layla is really cute! I don't get why a lobster would like guinness though...

Oh I have an idea! I'm going to try cooking lobster in Guinness! no?..ok..um..I'll shut up

Elise - The lobster thing has me stumped too! They had an animal theme back in the day. Toucans, bears, seals, etc...

bah.. you never take pictures of ME anymore....

Loved the lobster photo. :) Those are really good for cellphone pics.

4leaf - Maybe they jammed together.

Layla is so adorable, maybe my Jetta could have a play date? Think she's part Border Collie at all?

Paige - I don't think so. She's very short-haired as her Lab bloodline would indicate. She has white patches on her chest, behind her ears (?) and on the back of her legs.

I've seen pics of Weimeraner (sp?) and Lab mixes that could look like her.

i love your tattoo. if i had a scrotum, i would put the same thing on it. and of course post pics EVERYWHERE!!!

Tequila - Welcome! And thanks (well, not for the scrotum comment...cringe)

Maybe they feed them the guinness before they hit the rolling water. That way they never know what hit em.

Kat - as good as an explanation as any.

That last photo reminds me of your thumbnail!