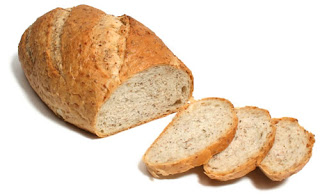 As passionately requested by Liz (and Slyde), here is another post about rye bread. Hehehe.

There were a few of you (White Rabbit, Globus, Lives by the Woods) who claimed indifference or even ignorance when it comes to rye bread. So I thought I would give you all a little primer on the topic. I spent hours of exhaustive research on the subject, and when I say "hours of exhaustive research" I mean a quick search on Wikipedia. The encyclopedia for the masses by the masses. The source for when you absolutely, positively wanna get things wrong.

Rye bread is made only with rye flour, no wheat flour. That's right. A good loaf of rye looks down its nose at wheat flour. No admittance to the party wheat! They will except ground spices like coriandor, fennel and aniseseed, but they draw the line at wheat flour. Hell, in the US they even add caraway seeds (sorry Poppy) to the loafs, and maybe some caramel for coloring...but no fucking wheat flour! Okay...there are some rye/wheat hybrid breads out there, but for purists or Nazis there should never be any integration between the races, er, grains. Did it just get uncomfortable in here?

What else? Oh yeah...Pumpernickel is a type of rye bread. Someone mentioned that in the comments to the last post. Here are some rye bread recipes. I'm sure someone asked for that as well.

I'll leave you with a popular saying in frigid Alaska. When something tastes delicious they call it "eggs on rye". Truer words have never been uttered, my friends.

How's it going with the carb intake, Liz? ;)

PS - I wrote this before seeing that I'm up against Liz on Oookami Snow's blog in his "Favorite Blog of 2008" tournament. Kinda fitting though. Bring it, Liz! - Earl
Pissed in the corner by Verdant Earl at 10:22 AM

i had no idea that rye bread contains no wheat. I must remember that for all my Gluten-Free friends.
if you wrote a book about bread, imagine the sales and royalties... and how much bread you could buy!! Hell, you could even have a stone oven installed in your house and get one of those huge paddle thingers to put in and take out the fresh bread. mmmm. fresh bread.

you did know that 'bread' is one of my current cravings, right?

Diva - You made me salivate (more than usual) with your description of the stone oven and the fresh bread.

mmmmm bread... I hate its carb ridden goodness. HATE IT!!

goes into her homer drool...

I disagree, this is at best your 4th or 5th most exciting post ever. Now if you will excuse me, I have to remove this loaf of rye from my ass....(I am THAT powerful and popular, and I am German).

Lotus - Do the caraway seeds hurt when you pull it out? ;)

Slyde - 1st off - A Top Gun reference? Dude...that's way too gay, even for you. Secondly, this post was anti-wheat and pro-rye. Get your facts straight. Or is "straight" an offensive term for you?

Diva - I just looked that up too, because I too have friends who are allergic to gluten. Rye flour does have gluten in it, just less than wheat flour. But it's still sooo tasty.

Earl - this is one recipe I've been wanting to try because it looks so ridiculously easy and it has beer in it - http://www.recipesource.com/baked-goods/breads/00/rec0065.html

I used to make bread every week. I always had fresh bread in the house, and never store-bought. I wanna start doing that again, and make some rye bread!! :D

Great now you know what song I have stuck in my head? "The Rye or the Kaiser" by Weird Al. Wonderfuckingful.

Rye bread is for perverse self-pleasuring by top Nazis? :-O

Well, at least I've still got my charming personality.

White Rabbit - It's true! Look it up.

Poppy - I wasn't correcting you, I was just mentioning the seeds that you hate and apologizing for it.

I was just mumbling to myself.

I just had this nagging feeling that there was no such thing as a rye seed, but didn't bother to investigate my feelings.

Wow! I never knew there was so much history to rye bread... They should put it on the packaging. Captain Morgan's Rum has a nice story on the back of their bottles (I read it yesterday). So much nicer than a list of ingredients. xx

Yes, but you forgot the most important part. They also make BOOZE from rye. Fuck the bread.

It was responsible for several outbreaks of mass hysteria in the UK in Medieval and early modern times.

Wet summers meant that a fungus (I think) called ERGOT grew on the rye crop, and made it hallucinogenic, leading to outbreaks of diverse family entertainment such as witch finding/burning and assorted bouts of religious hysteria.

Maybe it's a bad race memory in the UK, hence not much rye bread around.

Blogging is such an education.

bobgirrl - And here I was trying to avoid talking about booze. Nah, not really. ;)

lives by - See...that's why I hate fungus of all varieties. The religious hysteria that accompanies it.