There will be yawns

Am I the only person around who wasn't enthralled with one of last year's Oscar darlings, There Will Be Blood? Academy Awards for Daniel Day-Lewis and for Best Cinematography plus a whole boatload of additional nominations including Best Picture. As of this writing it has been voted on by over 57,000 users on IMDB for an average rating of around 8.5 out of 10 which places it at #45 in their Top 250 films of all-time.

All-time? You have to be kidding me! I know that user-run sites like IMDB often have incredibly skewed results to their polling, but this film was universally loved by film-goers and critics alike.

I watched it over the weekend, and I thought it was merely OK.

And I'm kinda sick of Daniel Day-Lewis, to be honest. He's a talented fellow, to be sure. But does he need to get nominated for everything he does? I thought his turn in Gangs of New York was incredible, but it bordered on the verge of overacting. I thought that he crossed that border in this film with his portrayal of oil man, Daniel Plainview.

You know, his career is beginning to remind me of Al Pacino. Once upon a time, Pacino was a marvelous actor. Then the Academy awarded him for his monumental piece of overacting in Scent of a Woman, and he's been doing it ever since. Let's hope Mr. Day-Lewis avoids this trap in the future. I know he's ridiculously devoted to his craft...some might say maniacally devoted, but there is such a thing as nuance and I thought he lacked any of that in this role. It's the difference between "larger than life" and, well...Godzilla.

Daniel Plainview, portrayed with John Huston-esque bravado and gravitas, was too un-likable and ultimately too boring for me to find interesting at all. I found myself not caring about him, his son, the town, the preacher and just about anything at all in the film. I know it wasn't supposed to be a summertime feel-good hit, but I've got a dark side too that likes depressing films. And my dark side was bored to tears with this one.

I did enjoy one performance in the film. The usually comic/manic Kevin J. O'Conner as Henry was a real pleasant surprise. He usually gets to play the sidekick/comic relief in some semi-big action/adventure films, and it was nice to see him lower the boiling point and really act in this one. Kudos to everyone's favorite "Tooch".

As vampire Willow said on more than one occasion on Buffy the Vampire Slayer, "Bored now". 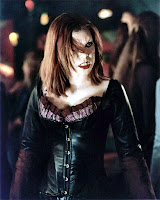 PS - I didn't feel like looking for a pic of anything to do with this movie, so you get vampire Willow. Get it? There Will Be Blood...vampires...Allyson Hannigan. No? Crap! - Earl
Pissed in the corner by Verdant Earl at 10:16 PM

Labels: There Will Be Buffy

I remember reading an interview with an acting coach in the US who said that students turned up and basically did Pacino impersonations - actual vocal impersonations - when reading anything because that was 'acting'. No, that's a great argument for birth control.

Why wasn't this in MOVIEGRENADE!!, eh?

I love "good" movies but I just cannot bring myself to watch this one. I was bored by the previews! (I kept referring to the movie as "no blood for oil" because I could not even remember the name.)

Yeah, no desire to waste 2+ hours of my life on this. I have NO issue walking out of a theater. Done it many times. And I don't even bother to "rent" anymore. Life is too short.

Badger - I thought about it, and while I didn't love it I didn't think it was bad enough to be on the old Grenade.

Bobgirrl - That was early Bette, but a good one. Michael Curtiz, I believe. Spencer Tracy must have done some bad things to get a 20,000 year sentence. ;)

i have yet to see this film, but you CANNOT go by the IMDB ratings on films.. any new film that comes out instantly skyrockets to their top 100...

I really had no inclination to watch this film. Nothing about it, except for the gushing reviews seemed to hold much of an interest for me. I finally got around to finishing up "No Country For Old Men". While it was an engrossing film to watch, I find it hard to beleive that it won best picture. Obviously the people that review these films and the folks that actually pay to see them are from different planets.

Slyde - I know, but all the critics loved it too. I don't get it.

Lotus - I have "No Country" on my shelf to watch next. Look for my comments either here or on the old Grenade!

I thought it was a decent movie but it was awfully slow.

I have nothing to say without making myself look like a complete cultural neandethal. So... hi, howya doin!?

I always thought it would be funny to overdub the "hooha!" that Pacino's character says in Scent of a Woman with "Pacino!"

I feel the exact same way about Daniel Day-Lewis!

I thought His role as The Butcher in Gangs of New York was amazing. However, I can see him struggling to adapt with other films.

I'm not saying he's bad. He's not like Tom Cruise. But there are a few films where I think he just isn't trying. or that he's over trying.

Leonardo DiCaprio is under-rated as an actor. Ever seen What's Eating into Gilbert Grape? That was the first time I saw him and he was so convincing. He adapts to most characters that he plays (apart from Louis 14. I didn't think much of that).

Johnny Depp is another one. He's very good at adapting to characters. He's played a wide variety from freaky Edward Scissor hands to George Jung.

Ok I need to stop talking... I'm getting to into this and I could be here for hours.xx

This is the first real bad review for this movie that I have read. I think the like for the movie rests on what the reviewer thinks about Daniel Day-Lewis. I'll have to watch this movie sometime and see what I think.

Jiggs - The "hooha" will likely be etched on his gravestone.

Elise - I've come to realize that DiCaprio is indeed a major, major talent. I could watch him in The Departed every week...he's that good.

Oookami - I think you will be hard pressed to find many negative reviews for this film. It just didn't do it for me.

i just saw "gone baby gone" and it was freakin' sweet.

And Allyson Hannigan will always be the "One time...at Band Camp" girl.

Tequila - It's on our NetFlix queue. Damn, I hate typing the word "queue" Fuck! There it goes again!

Limpy - No way! She will forever be the lesbianac Wiccan from Buffy. Forever!

Well, we can agree to disagree on that one, but I think we can agree that "Date Movie" should be kicked under the bed and left to rot.