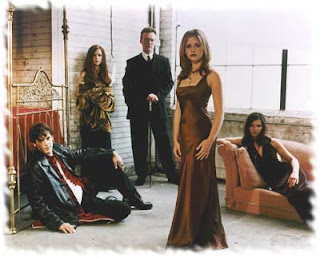 Or so it seems by a poll from Empire Online - a film and television review site.

They featured the 50 Greatest Television Shows of All-Time the other day, and it was truly a fanboy''s delight. Just about everything on the list was from the last two decades with most from the past few years.

It's almost like the list was prepared by my inner 12-year old. Lost, The West Wing and Buffy the Vampire Slayer were 3 out of the top 5 shows of all time. Now they are probably 3 of my top 5 shows of all time, but c'mon... Oh, and Firefly, all 10 episodes that they aired, was number 14. Once again, I loved it. But #14?

I know that TV, especially production-wise, has definitely gotten better over the years, but are they trying to tell us that the only television worthy of the list from the 60's and 70's were the original Star Trek and Monty Python's Flying Circus? Even their "old" shows are classic fanboy fare.

why oh why does it always have to come back to me?

I think you secretely want me...

My inner child is screaming......."What about Fireball XL-5, Stingray and The Thunderbirds!"....what a crock of shit!!!!

Oh God I hate watching The Greatest countdowns. One year I watched the 100 Most Sexiest Women Of All Time. To be number one you have seriously got to be drop dead gorgeous. Its not even Most Beautiful of the Year, its Of All Time.

Beyonce was number one! WTF! There's no way she's the sexiest woman of the Year forget All Time. I was so annoyed it was a joke!

So yeah... Don't watch the count down programmes. I'm shocked with The West Wing. I can't name a single person that watches that religiously....

PS: I want you Slyde

(Allow me to spin your time machine)

I dunno... can you even call something that on TV anymore?

Or how about All in the Family, or MASH? Thats just off the top of my head. this list blows.

And frankly, any list that doesn't have The Golden Girls can't be taken seriously.

The fact that they have Prison Break on there at all shows the lack of research and thought they put into this list. While I think the quality of shows like Firefly and Buffy far exceed most shows from the 60s and 70s, Lucy and All in the Family were definitely two that should have been on the list.

Oh, and at least Star Trek and Monty Python made the list. M.A.S.H. didn't even get a mention? Sigh.

Slyde - I try to mention you one out of every two posts. You are THAT important.

Lotus - I loved the Thunderbirds!

Elise - I am the biggest West Wing fan in the world! It's the best show!

RW - There are 8 million stories in the Naked City. This is just one of them.

Slyde part duh! - yeah, no All in the Family is a travesty.

G-boobs - Estelle Getty was hawt in that!

Avi - I used to love Prison Break, but it lost me this season. Too much already!

No "You Bet Your Life" with the immortal Groucho??? Wah!!!

I Love Lucy is the best show ever. Period.

Maybe it was just a misprint and was meant to be the '50 Shittest Shows of all Time'? Friggin' Firefly and Buffy? Jesus...

Really though guys, I want to come to NY to go out on the lash with you two, and perhaps get you both drunk enough to reveal your inner feelings.

Steph - I know that show was beloved, but I never found it funny...even though I nearly always found Groucho funny.

bobgirrl - Remember that episode where Lucy was stomping the grapes? That was dead sexy!

Artful Kisser - I agree that the list is shite (I don't think I made that obvious enough in my post), but no one...I MEAN NO ONE DISRESPECTS BUFFY!!! Sorry. Got a little uppity there, but Buffy was a tremendous show. So was the short-lived Firefly, by the way. Did you watch them, or are you bashing them based upon mere perception?

badger - All Slyde needs is a couple of girl drinks. I, however, have the liver of seasoned sailor so it may take a while. ;)

Ok, now who else wants me?

i'll fight your ass about firefly. mmmm inara, i want to make the sex on her face

Tequila - I LOVED FIREFLY! I just don't think that a show that only lasted a few episodes should be that high on any list. I would never diss anything that Joss Whedon has done, besides the pretty Asian boys he may or may not enjoy sexually.

But if duration doesn't matter for you, then maybe you would enjoy a romp in the sack with me. Uuuuugghh...done! ;)

Slyde - snuck that comment in, and I didn't see it. Oh..the old semen/seaman joke. I think I broke a rib. ;)

I've never seen Buffy (I can hear Buffy fans going into shock), but it beat out the Sopranos? Really?

I never got into Firefly that much, but I agree with Tequila, I would let innara make the sex on my face. Hot.

And I love Lost, but I still think Heroes should be ahead of it.

elise is right these top-whatever polls are usually pretty fucking off the mark. however lost and buffy do indeed rock - but obvious omissions of batman, the waltons and the sopranos does leave this one rather lacking.

Em - Buffy is amazing! And I plan on watching Battlestar Galactica one of these days.

globus - The Waltons, eh? The Sopranos did make the list at #3, I think.