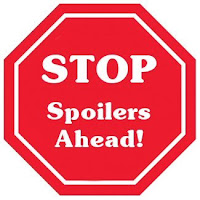 Until I have something better to say, this seems to have become a DVD review site once again. For good movies. We already have a review site for awful movies, but I haven't seen any lately.
I watched the oddly title Cloverfield last night in the wee hours of the morning, and I got hooked. I spent more time online reading about it and checking out the viral marketing after my viewing than I did to actually watch it. It's less than an hour and a half long and it felt even shorter. Just like I said yesterday about No Country for Old Men, it left me wanting more...and that's what I want out of a movie.
Now I know that I'm probably the last geek on the block to see it. Most of you (yeah...I'm looking at you) most likely saw it in the theaters when it was released. I couldn't be bothered. I was probably getting laid or something equally as cool that weekend.
Anyway, I've spent a lot of time theorizing as to what happened back on April 27th (towards the end of the film) with the object falling out of the sky in the waters off of Coney Island and I think I have all of the answers. Without and further ado here is my top ten list:

OK...so that was only 9 things. Gimme a break. I haven't had my coffee yet.

Pissed in the corner by Verdant Earl at 9:15 AM

i haven't seen this. not really planning to - but it's probably xenu.

This is just one of those films that I don't have a lot of desire to see. The whole concept of Viral Marketing sort of turns me off to wanting to see a film. It is like seeing a thousand billboards for a book that won't be published for 6 months. When it finally comes out, I don't really care about it. After the awful experience with the Blair Witch Project, I need to have a good idea of what the plot entails and see some respected names in the credits. Hidden plot lines and whispers don't do it for me.

now this really surprises me...

i loved cloverfield, but i really thought you were going to call to tell me you hated it.

you sir, are finally comming around...

Does this place keep changing color? I never know if I'm in the right place anymore ;O)

Lotus - Yeah, I hear ya. I wasn't expecting to like it, but I decided to give it a go. I had a lot of fun with it.

Liz - Been about 3 weeks since I changed my template. Thanks for noticing. (grumbles....not like I don't visit her fucking blog every fucking day...grumbles)

You're way, way off base on this one. That thing coming out of the sky was Iron Man, streaking earthward in a blatant bit of cross-promotion.

It was the long-awaited return of Xenu. He has come back to claim Suri Cruise as his intergalactic bride.

My name is RW and I approve this message.