"There can be only one" 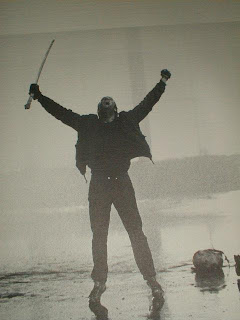 Enough of that sad bastard silliness from the past few days. I'm movin' on. It's time to play a game called "there can be only one". Clunky name, I know...but if you are a fan of the film Highlander (and really...who isn't?) then you know the game. I slice your head off with an antique katana and I drink your milkshake. How's that for combining movie ephemera? "Ephemera" is not even the proper word to use, but sometimes I like to pretend that I'm smarter than I actually am by using big words that kinda sound right until someone calls me out on it. So I'm doing it first. There can be only one.
Here goes:
There can be only one Kentucky Derby winner. Yeah, who cares...right? I don't approve of the riding of humans on the backs of any animals unless there is the appropriate amount of sexual tension. What I do approve of is a finely made mint julep. Only the best Kentucky Bourbon, only the finest shaved ice, only the mintiest, um, mint. And your good friend Earl as mixologist. That's what I'm doing later this afternoon. Don't you wish your boyfriend was hot like me?
There can be only one Democratic nominee for President. I've been going back and forth on this, and while Vice President Bob Russell seems to have more experience I think I'm going to have to go with Congressman Matt Santos. His ideas on Health Care reform and his Education initiative are enough to sway my vote. Plus I like the idea of voting for the first Latino President of these here United States. What's that you say? I'm confusing real life with season 6 of The West Wing? Nope...no confusion. I'm choosing fantasy over reality because reality is just too damn depressing with the two idiots we really get to pick. And when I say "we" I really mean a confusing delegate system. Plus I don't really think that either Hilary or Obama can beat Senator Arnold Vinick. I mean, c'mon...a moderate Republican from California? That's just unfair. Am I doing it again? Fuck!
There can be only one winner on Survivor. Yeah, I know....blah blah reality TV sucks blah blah. Fuck that! I still love me some Survivor. And this last episode was a really great one. After two weeks in a row where a contestant with a hidden immunity idol got blindsided and voted off without using it, we finally get a contestant who is smart enough to deserve the idol. Amanda played it on the down low. She knew that everyone except Parvati was going to vote her off. She even got Parvati to say who she was going to vote for in a real intelligent way. Then she turned the tribal council on its ear by playing the idol and blindsiding Alexis. It was a brilliant move. I've already been rooting for her to win, even though she is constantly sporting a sad puppy dog face, but now it's set in stone. She has to win. Either her or that furry bastard, Eric. He's not really that furry, but I would imagine his pubic area is. Huh, what?
There can be only one winner in Ookami Snow's New Favorite Blog 2008. Will it be litle ole' me? Will it be Liz aka FunnyGirl aka Spartanette aka the Kurgan? Ok, that last one was another Highlander reference. Sorry. He is looking for some help (vote for me!), so head over there and voice your opinion (vote for me!). It doesn't matter who you vote for (vote for me!), it only matters that you vote (vote for me!). I'm voting for Lizzie, because I'm too humble to vote for myself. You, oh my readers and only friends, should vote your conscience (vote for me!),

Labels: Why did a Spaniard have a Scottish accent anyway?

globus voted for you, twice, which he hopes doesn't mean the votes cancel each other out :-)

one of the best episodes of surivor ever.. lets see if Amanda can parlay this rare moment of brilliance into something that will let me finally have some respect for her..

globus - as long as there isn't any hanging chads, I think we are fine.

I was completely lost.

Then you said Mint Julep and I was found.

Then you completely lost me.

I'm over here shaving ice if anyone cares.

bobgirrl - It turned into a mint julep/mojito/caipirinha night. The six of us finished off the bottle of bourbon and most of a bottle of rum. And for some reason, I am up at 6AM.

And if not why does it need to shave?

White Rabbit - No but it grows pubic hair, and sometimes you just need to trim that shit.

There can indeed be only one Kentucky Derby winner, as I see they've taken to shooting the loser now.

I'll vote for you, if only because Liz beat me twice and I'm an incredibly poor sport.

limpy - Never too early for a dead horse joke. Seriously though...how the hell did it happen? She was done with the race already and just, ya know...walkin' around. These animals are bred for one thing only...and it's making them weaker. I call foul.

I have a question for you way off topic of this post: Have you seen "No Country For Old Men"? I want to know what you think if it.

Paige - You were about 12 minutes too fast with your question. Now it has been answered. ;)