Nothing gets my inner lush going like reading about a really good cocktail. Tonight I blame Bobgirrl for making my liver ache with longing. She just posted about experimenting with the perfect cocktail...a bacon vodka martini. I think she is a little confused, because obviously the smoky saltiness of bacon is much better suited to bourbon (and we will get into that a bit later on). 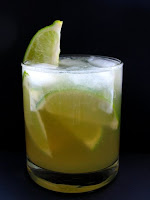 Moscow Mule - The original Moscow Mule is made with ginger beer, fresh lime and vodka poured in highball glass over large ice cubes. I'm going to stress the importance of large ice cubes in all great cocktails because large ice cubes melt slower than small ice cubes. Less melting means less water which means yummy cocktail goodness. I'm a big fan of all cocktails with ginger beer (like ginger ale, but spicier), and my favorite version of this one was called a Gin-Gin Mule served at The Pegu Club in NYC. It substituted ginger-infused gin for vodka. Made it extra gingery. Yum!

Martini - Notice I didn't say "Gin Martini". All fucking martinis are made with fucking gin. "Vodka martinis" are really just vodka cocktails served in the wrong glass. Sorry...I just don't like vodka and sometimes I get a little angry for the wrong reasons. Anyway, as I told Bobgirrl, her favorite martini is my favorite martini. Tanqueray 10 with bleu-cheese stuffed olives. The best one I've ever had...and I've tried many...was at a Morton's in New Orleans. They served it in a silver-rimmed martini glass. I felt like a King! 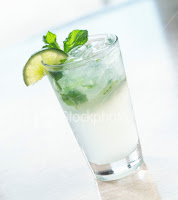 Mojito - Muddled mint, simple syrup, fresh lime, crushed ice, lite rum and seltzer. Six simple ingredient that make up one of the most complex tasting of all cocktails. Is it the lime you enjoy? How about the mint? Damn, that rum tastes good too! So refreshing on a hot summer day or a cold winter night when you are pretending you are in the sun. My favorite was served at a place called Conch Republic in Key West about 4-5 years ago. Sadly, I've been back many times and it has never been as good as it was that first time. Many bartenders over-muddle the mint and now they serve it in a smaller (plastic) glass. But that first one...holy crap!

Vesper - Named after James Bond's love interest in Casino Royale. Originally part gin, part vodka and part Kina Lillet with a lemon twist. Kina Lillet is no longer available, so most will replace it with Lillet Blanc and maybe a dash or two of bitters. As I've stated before, I don't do vodka. Even when mixed with other booze. Fuck that! So I've played with the recipe some and my favorite was mixed by a bartender at one of the hotel bars at The Carlton at Madison Avenue in NYC. He made it with Hendrick's Gin (sooooo goood!!!), Lillet Blanc and an orange peel. He did this cool trick with the orange peel and a match to cause a small flame before adding to the Vesper. Well, I thought it was cool. 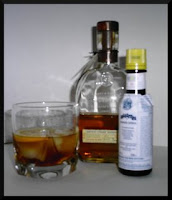 Old Fashioned - Kind of an, um, old-fashioned choice. Bear with me. Traditionally the Old Fashioned is made in a short cocktail glass with rye whiskey, simple syrup and bitters. Add a couple of ice cubes and a twist of lemon and you are all set. The best one I've ever had was at a place called PDT in NYC. They made it with bacon-infused bourbon, maple syrup and homemade bitters. It was truly the most ridiculously incredible cocktail I have ever had. I want another. I want ten more. I want to stick my dick in it. I want it to stick its dick in me. Huh, what? I don't know how they infused the bourbon with bacon. Maybe they force fed bourbon to pigs for years and it just seeped into the bacony parts. That sounds like a fun job!

Have a great weekend everyone! I'm out of here....
Pissed in the corner by Verdant Earl at 11:44 PM

ohhh man, do those blue cheese stuffed olives ever look tasty!! it's makin' my mouth water... i'll have to dry them with a martini some time...

also, on days like last saturday, i could kill for a Mojito... 3 more months...

also, happy long weekend. we had ours last week. Long live the Queen and such.

Check out the back of the Captain Morgan's bottle. There's a nice little story about how it came about.

Hope you had plently of asprine for the next morning...

Diva - sorry for the booze torture. Won't be long now...

Elise - Honestly, I rarely get hung-over nowadays. I tend to hydrate a lot when I drink and I stop a lot earlier in the evening than I used to. Well, not "a lot" earlier. ;)

I envy you people who don't have a 25 year-old ulcer that makes you want to die with even one sip of a great cocktail. I haven't drunk anything but beer and wine in so damn long because I can't mix alcohol with anything remotely sweet. Hell, when I go out to dinner I have to decide early on if I'm having wine with my meal, or dessert afterward. It's inhumane, I tell you. No one should have to make a choice like that.

I would love to spend an evening in NYC with you and just get twisted! All those drinks look amazing! I'm definitley going to have to try that one with the Ginger Beer...

Steph - Inhumane is the only word for it.

Liz - Don't let it be said that you lack restraint.

I've got an off topic question for you: At the end of your posts you have "Pissed Out By B.E. Earl" and then the comments link says, "# Harumphs". On Blogger how do I change this? The Diva and I have been trying to figure this out and we can't. Her's is changed too but she can't remember how she did it. I've been in and out all of the menus on Settings and Layouts, etc. and I can't find anything.

Paige - If you click the "Customize" Link on the Blogger toolbar on top you will get to the "Add and Arrange Page Elements" page.

You can change these items by editing the "Blog Posts" area.

That's wild but I'll take a Diet Coke on the rocks. Lots of rocks. No styrofoam cup.

Have a great weekend!

I'll think of these exciting recipes as I skim the liquid off the sterno later this evening.

can you REALLY claim to be happy about a longweekend, when you don't ever have to go to work?

OK, now for the blue cheese olives. The olive bar at my local Whole Foods sometimes carries them. I like to buy them to make martinis. One time I bought just four. The checker looked at the container in a sorta perplexed way and the guy behind me in line said, "only 4 olives?" To which I replied "yeah, 2 martinis." They both thought that rocked.

ajooja - Yeah, I knew this post wasn't gonna be for everyone.

limpy - sounds good to me! Just replace the Scotch with Irish Whisky and I'm all in. ;)

Slyde - I meant to include some girl drinks for you, but I forgot.

bobgirrl - What if you wanted a 3rd martini that night? Dear God(dess)!!! I forgot to mention it, but at Morton's they stuff the olives as they make the martinis...no pre-stuffed olives for them! Holy crap, I'm thirsty!

FANTASTIC, I followed your instrcutions and I got all the changes made! Thanks so much for your help! I'm goin' to have a celebratory drink in your honour! Have a good long weekend!

Jameson's or Bushmills? I try to keep all the faiths happy at my place.

Limpy - As a good lapsed Catholic I drink Bushmills...Protestant Whisky!!! I like Black Bush, especially. The double entendre is neat as well.

I'm an absinthe guy,, but I think it's all about the ceremony.

RW - forgot to mention one dring. I had a Sazerac at PDT also that had 140 proof Bourbon and absinthe. I'm still seeing visions.

You do indeed have a PhD in cocktails Sir Earl.

I have to agree with the whole Martini comment. I majored in them in college. Couldn't figure out why the drink existed if it tasted like crap, so I did a lot of research and learned how to make one 'right'. Tanquery is the ONLY thing you should use, and they need to be shaken and NOT stirred to get them as cold as possible. I originally only had them with a lemon twist, but in my old age the bleu cheese olives are sounds a bit better. .... this is making me thirsty.

Lotus - While I love Tanquery 10 in my martini, I've also been known to use Hendrick's or Bombay Sapphire. All are delicious. I will, however, have to disagree with you on the shaken not stirred comment. Gin martinis should be stirred with a long spoon so as to not "bruise" the gin. I think somebody made that up...the real reason is that when you shake it you are diluting the gin with melted ice water and making a less potent cocktail. You can get a martini very, very cold with careful stirring. So I have found in my experimentation.

Think about it. How strong is gin? You can almost run your car with the octane in the stuff. A lot of crushed ice, shaken, and then strained means you get quicker more complete cooling and once poured no dillution. I think shaking is the better way to go. Could never get it cold enough by stirring it.

As for Bombay Sapphire, never cared for the stuff. Wasn't nearly as good as Tanquery.