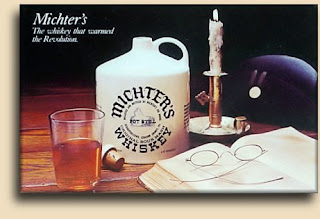 Too bad this place is no longer around. I would have loved to have taken a Saturday trip there with Gia sometime this summer. The article is a little confusing, but it appears that the distillery shut down sometime in the 1990's. Too bad...sounds really cool and historic. From what I understand, Michter's is now made someplace in Kentucky...maybe. Like I said, the article was confusing and there appears to be some kind of intentional amiguity going on when it comes to early American Whiskey distillers in the Northeast.

I was first introduced to this American Whiskey by a Bourbon guy who looks a lot like Mr. Burns from The Simpsons. 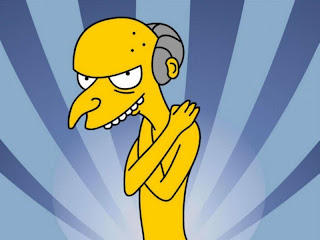 Yeah...just like that guy. But with more clothes...and creepier, for some reason. He found it at a local liquor store and upon some research into the subject, he dove in. Gave me a bottle for my 40th birthday a while back. It's really, really, really good. And not very expensive either. Lots of chewy caramel flavor and coloring. Smells great too.

Anyway, yesterday I picked up Gia from the train station after another interview in NYC and we headed out to a bar that neither of us had been to in a long while. I recognized the bartender from another joint that I used to frequent. I get around. Had a couple of beers and some nachos, and just as we were about to head out I saw it... 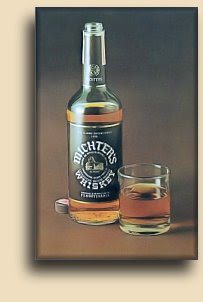 A brand spankin' new bottle...just waiting to be cracked. Our lovely barmaid poured us a small one, and Gia was quick to agree...very smooth and delicious. We wanted more. Hell, we wanted 10 more. But we had places to go and people to see. So we left. Now I am in search of where I can find the next bottle.

There is a mythic element to Michter's that purveyors of fine whiskey like to go on about. It may have been the forebearer of the whiskey that George Washington supplied to his troops in the American Revolutionary War. There is probably no way to prove or disprove that claim, but there is some evidence to it at least. It's roots, however, go back to the oldest distiller in the colonies...certainly before Kentucky became the whiskey capital of the US.

I know that there may be a consensus around the world that the best whiskey comes from Scotland. I don't necessarily argue that point. But generally, I prefer American Whiskey, mostly Bourbon, to Scotch. Hell, I even prefer Irish Whiskey to Scotch. But that's me. No accounting for taste...ever!

Hmmm...been posting about booze alot lately. Must be summer. Must be stressed. Must be thirsty. Something.
Pissed in the corner by Verdant Earl at 12:01 AM

Don't forget, if it's made in Scotland, it's whisky...

The one thing Scotland has over most places is an incredible diversity of flavours for a place that is so damn small. Also, the history appeals to many people, even if the distilleries are all owned by multinationals or Japanese companies now, excepting one or two.

I used to work on a whisky magazine, does it show? Damn that job had some good freebies. Lots of whisky, for example.

My favourite bourbon – much as I like the villain's favourite, Maker's Mark - is undoubtedly Van Winkle. Not had it for a few years though, and since I had it the distillery has been bought by a much larger company. It had been family owned for a long time, now it's part of the Wild Turkey family or something. Disappointing, but then the family member that sold it just didn't care for it one bit. Which is fair enough, I suppose.

badger - Yeah, we went on about the whisky/whiskey thing a while back, you and I. I've had Old Rip Van Winkle...very nice Bourbon. It was purchased by the Buffalo Trace Distillery back in 2002.

Funny that you mention it with Maker's Mark, because those are two different tasting Bourbons because they both use winter wheat instead of rye as part of their formula.

must be that you drink too much...

I feel so uncultured....can't stand the bloody stuff.

RW - Never tried the Knock, but I see it's aged in American White Oak, Ex-Bourbon Casks...so there ya go.

Jon - I didn't get "into" whiskey/whisky until my mid 30's. When I was younger, I couldn't stand the shit!

I gotta say - not the biggest fan... maybe I ought to try some different ones. I am, however, a new fan of port. I love it. Way too much.

I always saw Mr. Burns as a Gin Man.

Liz - I love me some port after a big, fat dinner. MMMM.

Oooh - all your booze posts lately reminded me that I need to do a post soon of a restaurant I went to recently. It had a huge collection of um, I don't know what you call them - the things on the taps that they pull down to get beer out of the containers. Taps? Handles? I don't know - you'll know when I post about them and see my pics. They had hundreds of them. Sorry - this had nothing to do with your post but a lot of my comments are like that. LOL. Anyway, I'm thirsty for a cold one now.

Teeni - Heya! Yeah, tap handles would be it. Was it just the tap handles or where they attached to kegs o' beer? I guess I'll find out when you post. ;)

I did not know that about those two bourbons. Makes a lot of sense though.

Loads of Scotch uses US white oak ex-bourbon casks - I don't think any of them use a 'fresh' barrel, unless it's for use in a blend. That's how I think it works, anyway...

I think there's a difference between the whisky/whiskey that producer countries keep or the domestic market and the stuff they export. When I go abroad I find lots of unknown Scotch whiskys - and nasty stuff they are largely too. Blended Scotch whisky for the domestic market varies from the okayish (Famous Grouse) to the disgusting (Teachers). Mainstream Irish whiskey - Jamesons and Bushmills - is generally better. But the Scotch single malts are somethig else...
We tend just to get Jack Daniels and Jim Beam of the American whiskeys here. I find them too harsh but JD is very popular with young people.
Mainly, rum is my spirit of choice these days.

badger - most anejo and reposado tequilas are also aged in old bourbon casks. Just as an FYI.

WR - JD is a particular tasting whiskey. It's a Tennessee Whiskey so it goes through something called the "Lincoln County Process" - charcoal filtering in 3/4 steps, basically. Very unique tasting...as whiskeys go. Jim Beam is fine for Bourbon, but it is more of a basic whiskey. Beam themselves make much better whiskey than plain ole' Jim Beam. I like Scotch Single Malts as well, but I prefer the higher grade Irish Whiskeys to Scotch. My current favorite is a newish one called Redbreast. Very smooth. I do like one blended Scotch whisky very much. Johnny Walker Green label is fantastic! And no too expensive, certainly not at the level of Blue label.

mmm jug house... sign me up to go there... i'm pretty sure no matter what kind of jugs they are, i'll be pleased.

i actually have family that makes moonshine. white lightning.. mmm it will get the job done

Tequila - "Jugs" may be the finest word in the English language.

LOL. The tap handles were unfortunately no longer attached to beer kegs. But that's really okay, cuz some of them were REALLY old. Anyway, I had to post an award I got from the Diva first but am working on my tap handle post for the next couple days. :)