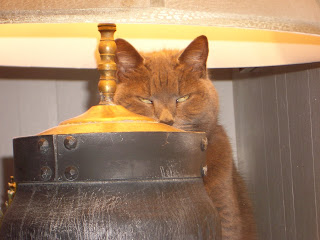 We live in the presence of a serial killer. Her name is Mina (short for Thumbalina...don't ask) and she is Death Incarnate.

Mina is one of Gia's parent's cats and she might be the toughest bitch on the planet. Birds, chipmunks, mice, voles, small squirrels and even one unlucky rabbit have all been shown the way to the next life by this graceful little killer. I don't know how she does it. Those chipmunks are fucking fast. Maybe it's her extra toes. Gives her greater swatting ability or something.

I read an article a while ago which talked about housecats as hunters, even comparing them to serial killers. The article went on to talk about how housecats aren't native to this country and that makes them an apex predator because in some communities much of the indigenous wildlife isn't prepared to defend themselves against puddy tats.

That sounds like Mina to a tee! She is up to 3 or 4 kills a week now that the better weather is here. Seems kinda unfair. She's not killing for food, although the corpses she drags into the house usually have a bite mark or two. She is killing for the thrill of the hunt. Just like a serial killer. 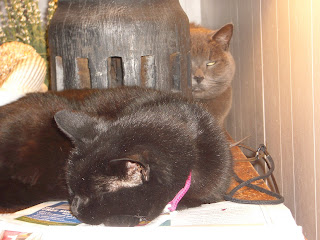 Here she is sneaking up on her mother, Bella. Well, it looks like she is sneaking up on Bella. She wouldn't harm a hair on the head of any fellow cat. Except Sydney. She hates him for some reason. She likes to sit outside our screen door (she's an outdoor cat, and Sydney is an indoor cat) and taunt him with her presence. She's evil. But oh-so-adorable! Very pretty animal.

Once you get past the stench of carrion that she carries around with her wherever she goes, that is. Gia's mother has put two bells around her neck so that the local wildlife can hear her coming. Hasn't worked thus far. She's adapted to the situation. Just like a serial killer would. 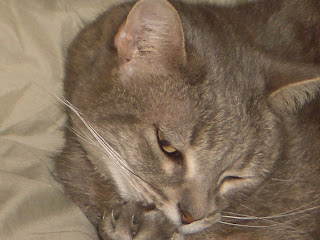 Oh, and I'm including this picture of our girl Sammi not because she is a serial killer, like Mina. No, Sammi is an indoor cat as well. But if you look closely at her paw there on the bottom you can see that she sometimes sleeps with her claws popped out.

Just to remind us that she used to be feral and you don't want to mess with her.

I've got the claw marks to prove it.
Pissed in the corner by Verdant Earl at 3:00 PM

There's been a fair bit of stuff over here recently about how squirrel is actually good to eat - a sort of cross between duck and lamb, we are told. Wouldn't know personally...

WR - only rednecks and kitty-cats eat squirrel here in this country.

Cats scare me with their secret agendas.

wow... when you used to come to my apartment, you would be coughing and sneezing the whole time because of my cat.. now you are a cat fiend.....!

I know you're all "just say no to lolcats", but it's just you've been looking at the wrong kind.

Slyde - I lost my allergies to cats over the years somehow. Or maybe I was just using it as an excuse to leave quicker.

RW - I'm not anti-lolcats, exactly. I'm just against posting them on my blog. I'll check 'em out.

Mina looks mean!! But absolutly georgious! My cat used to bring in rodents of all sizes and line them up under the TV for me to inspect in the morning. He never understood why I didn't appreciate his nights work!

Found you at Globus

My cat has been at the same thing. There is dead shit everywhere. I've stopped picking it up though - it deters the JWs. Seriously.

Suburbia - Heya! They are very proud of the death and destruction they cause, eh?

Jehovah's Witnesses baby - doncha get em knockin on your door?

Liz - Wow! Not in many, many years. I knew a guy who used to tell him that he was Roman Catholic and back in the day his people would burn heretics like the JWs. That usually would keep them away too!

I had some a few weeks ago and in December - I took a hit at Spartan's house - but I freaked them right the hell out. It was awesome. They actually ran away... and I yelled MERRY CHRISTMAS at them as they were turning the corner. LOL.

Was it Terry Pratchett who said that if cats looked like frogs, we'd realize what brutal little bastards they are?

Downtown guy - Something to be said for cute killers.

Aw, your cats are pretty. I love that Mina always seems to be lurking behind something. She looks up to something. I've been meaning to come around more often and will work on that. I enjoy reading your comments on mutual friends' blogs.