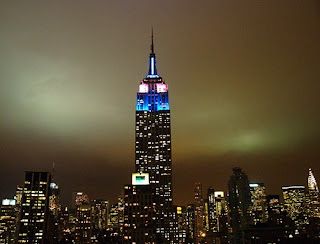 There a certain pride that goes with being a native New Yorker. I assume the same can be said for natives of Boston or Chicago or San Francisco or pretty much any city, town, village or hamlet that is loved by it's residents. I can only be called a "native New Yorker" in the loosest sense, however. I'm not from New York City nor have I ever lived there. I have, however, spent my entire life living on it's outskirts about a one hour train ride away from the Big Apple. By the way, I do not approve of the term "the Big Apple". I don't know why I just used it. Maybe just to tell y'all that I don't approve. Feh.

Anywho. Besides the pride in your hometown of choice, there also exists a certain oblivousness to what can only be called tourist attractions. Faneiul Hall in Boston. The Sears Tower in Chicago. That really big ball of twine in Darwin, Minnesota. You know what I mean. In New York we have the United Nations, the Statue of Liberty, the hole in the ground that was the site of an unthinkable tragedy and the Empire State Building. But we, the royal we, really don't think twice about those sites. Everyone else comes to our cities to see them, and they can have them. We, once again the royal we, just don't care about them.

Would you believe that in the thousand times or so that I've been to NYC I have never been to any of these sites? Oh, I got about a block and half away from the hole in the ground a couple of years ago, but that memory is still stuck too firmly in my throat so I couldn't force myself to get any closer. And I had a class trip to the Statue of Liberty once, but we never even made it inside.

And I've never been inside the Empire State Building.

In fact, and this is sad, I've never even really cared to find out exactly where it was. I mean I saw it from a distance as I drove into the city or took the train. And I guess I may have seen it from hotel rooms or friend's apartment buildings. But I really just never cared.

So a few years ago I was walking around Midtown with a friend of mine. We were walking by an obviously large building with the rest of the touristy Midtown crowds. That's when I saw a plaque on the building identifying it as the Empire State Building.

I stopped. I may have stepped back and looked up. Then I said "Huh!"

My friend wanted to know what was up, so I told him that it was the Empire State Building. I even went up and patted the side of the building like it was a well-behaved doggie. "So" he said. That's when I told him that I was surprised because I never really knew where it was before. And I started to walk away.

I'll leave it to the tourists.

(Hope all the attendees of BrittCon 2008 had a great time in NYC!!! Did y'all see the Empire State Building? ;)
Pissed in the corner by Verdant Earl at 12:01 AM

As a foreigner I can't imagine why anyone would put the WTC site on their list of sites to see, but to each their own I guess. I do think of the Empire State Building though and the Met and the Guggenheim and Central park...and am I delusional about some waterfall installation on Brooklyn Bridge? Or am I mistaken? Melbourne doesn't really have anything iconic like a bridge or an opera house like Sydney, but if we did I probably wouldn't have visisted them either.

You are absolutely spot on with this one. When I lived in DC I never went to any of the attractions and I was inside the Sears Tower here in Chicago once, and that was just... I don't remember when that was...

Like you, though, the feeling for "home' is just that. I love NY, but miss Chicago when I'm away. Got nothing to do with sites; it's just a feeling.

AK - and yet there they are every day at the hole in the ground. I don't really understand it either. Downtown NY still kinda feels like death to me.

RW - I have gone to the Sears Tower when I've visited Chicago. I did the "lean against the window" ala Ferris Bueller thing too. I felt extremely stupid afterwards and I even told my friends that the only reason I wanted to go was because I was never going to the Empire State Building and I wanted to see if I was missing anything. I wasn't.

Hell, I don't even live in NYC and when I go there I skip those things. My wife and I spent a weekend there a year or so back and walked right by the Empire State Building. We did, however, drink too much at Hogs 'n Heiffers and didn't regret it one bit.

Limpy - I forgot to include Hogs N Heiffers in with the touristy places I never go to. ;)

(Went there once on a weeknight and we actually had a decent time. The frat-boy crowd probably wasn't coming around until much later.)

There's a world-famous tourist site less than 10 miles from my house and I've never been there. I've lived in the area 30 years and I've only considered going once.

When I found out how much the tour cost, I thought, "I'm not paying for that!"

When I drive to downtown St. Louis, I don't even look at the arch anymore.

i dont think ive ever been up in the empire state building either.. .

i know ive been in the lobby when i, like you, passed by, but i dont remember ever going up.

of course, i had been in the trade center too many times to count, as i worked there for a while...

This makes me wonder if you would have the same type of reaction to the Grand Canyon. I have known some folks that have seen it and wondered what all the fus was about.....they thought it was just a really bid ditch. I am just not one of those people.

We DID see the Empire State building. And as a tourist - it was pretty cool. ;-)

ajooja - You can actually go in that thing, eh? Weird.

Slyde - I always forget that you worked at the WTC for a while.

Lotus - I would love the Grand Canyon! Natural wonders are a whole different story. And I don't live anywhere near there so I could do the touristy thing and go there. I always think of the film "Grand Canyon" and Danny Glover telling Keving Kline "Man, you got to get yourself to the Grand Canyon!"

Miss Britt - I followed you kids a bit on Twitter. Sounds like you had a great time. I'm heading into the city tomorrow night to see a friend's band play. Holla!