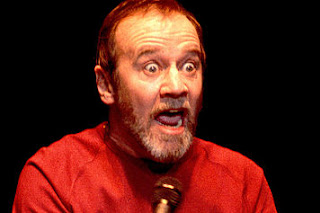 George Carlin passed away yesterday after struggling with heart disease for many years.. While I was never a huge Carlin fan (I thought he was funny, but not THAT funny), my father was. He loved Carlin! A little weird considering how conservative my father was.

As my father was the ice box man in our family, he knew exactly where George was coming from in the monologue below. This is for him.

I'm the ice box man at our house. I'm Ice Box Man! I answer the call when there's a need at the ice box. Two very important responsibilities, the first one is: keeping people from standing with the door to the refrigerator open for more than 45 minutes at a time. God, that gets me mad - "YOU WANT TO CLOSE THAT GODDAMN DOOR PLEASE? YOU WANT TO CLOSE THE DOOR?! YOU'RE LETTING OUT ALL OF THE COLDNESS I SAVED OVERNIGHT! COME ON, CLOSE THE DOOR!" - you know, some guy smoked eight joints and he's gonna inventory my refrigerator. "Ummmm...Ummm...Uhhh.... "Here, here's fifty dollars- go down to the Burger King. Willya, God! We'll save more than that on electricity alone. Close the goddamn door, willya?"Look, if you wanna know what's in there, why don't you take a Polaroid picture and go away and look at the picture and then come back and figure out what you want. Years ago, we didn't have Polaroid cameras. We had to make an OIL PAINTING of what was in there!

Aah, I don't let it get me down. 'Cause there's a bigger responsibility. And that is getting into that refrigerator and deciding which things need to be thrown away. Most people will not take that responsibility. Most people will just go and get what they want, leave everything else alone and say, "Well, someone else wants that. Someone else will eat that" Meanwhile, the thing is getting smaller and smaller and smaller and is, in fact stuck to the rack. Well, I've got to go in there and decide when to throw things away. "Chocolate pudding? Does anyone want this last chocolate pudding? I have just one chocolate pudding left. It's only pulled away from the side of the dish about three inches all the way around. And there's a huge fault running through the center of the pudding. Actually, it's nothing but a ball of skin at this point. Does anyone want a ball of fault ridden chocolate pudding skin? I'm only going to throw it away."

Do people do that with you? Offer you some food that if you don't eat it, they're only going to throw it away. Well, doesn't that make you feel dandy? "Here's something to eat, Dave. Hurry up, it's spoiling!" "Something for you, Angela. Eat quickly, that green part is moving!" "Here, Bob. Eat this before I give it to an animal." Y'ever been looking through the refrigerator and you come across an empty plate? Boy, that starts me to wondering. Did something eat something else? Maybe the olives ate the tuna! Maybe that chicken isn't really dead yet. Actually, I picture a little mouse with gloves and a parka on, y'know. Just waiting for the lights to go out.

Perhaps the worst thing that can happen is to reach into the refrigerator and come out with something that you cannot identify at all. You literally do not know what it is. Could be meat, could be cake. Usually, at a time like that, I'll bluff. "Honey, is this good?" "Well, what is it?" "I don't know. I've never seen anything like it. It looks like...meatcake!" "Well, smell it." (snort, sniff) "It has absolutely no smell whatsoever!" "It's good! Put it back! Somebody is saving it. It'll turn up in something." That's what frightens me. That someone will consider it a challenge and use it just because it's in there.

It's a leftover. What a sad word that is. Leftover. How would you like to be...a leftover? Well, it wouldn't be bad if they were taking people out to be shot. I might even volunteer. But, y'know, leftovers make you feel good twice. D'ja ever think about that? When you first put them away, you feel really intelligent- "I'm saving food!" And then, after a month, when hair is growing out of them and you throw them away you feel...really intelligent- "I'm saving my life!"

When you make a sandwich at home, do you reach down past the first three or four pieces of bread to go down and get 'the good bread'? It's kind of a self preservation thing, y'know? What you're really saying is, "Let my family eat the rotten bread! I'll take care of Numero Uno!" And down you go into the loaf. Down, looking for the two that you want, a matching pair. And you have to be careful pulling them out so they don't tear. And then when you get them to the top, the upper eight slices fall the other way. I never straighten them out. I think, screw it, let 'em think a burglar made a sandwich. Not my job, straightening out the bread.

Gotta tell me. In the refrigerator, who is it, please that puts into the refrigerator the half-gallon containers of milk with only that much left in them? I get one of those every time. Hey, here's some milk- fooom! ...God, not enough to drink. Better put that back, huh? I know my responsibilities.
Pissed in the corner by Verdant Earl at 11:10 AM

Aww, I have many good memories of this guy and my younger sister loved him to pieces, going to see him live at some of his events. I personally loved the whole meat-cake thing. I'm not so sure if it was that what he was saying was so hilarious but his facial expressions could start an unintended flow of urine on their own. He'll be missed. Nice post.

god, i am gonna miss carlin...

i remember watching his latest comedey special last month, and thinking that for the first time, he really did look frail...

i discovered carlin in high school, but it was his old comedy tapes from the 60's that kept me going in college on those late nights...

maybe i'll listen to one of em tonight..

Teeni - Even though I wasn't a HUGE fan...I was a fan. And it's easy to recognize his genius. The King is gone, but he's not forgotten.

Slyde - I didn't know you were a big fan. And college was hell for you, wasn't it? Shame. Betcha wish you could go back and do it all differently, eh?

"Here, Bob. Eat this before I give it to an animal."

I've used that line many times myself. Which is odd since I don't think I know anyone named Bob.

I thought Carlin was slipping lately; seemed more cranky than funny. But his early stuff was genius and he'll be missed.

Limpy - I use the "I'm only gonna throw it away" line about once a week. It was my father's favorite part of the bit too.

I don't know if anyone was really a big fan of George, but everyone knew of him and could relate. He was the first comic that I heard that I could relate to and know that I was wasn't the only one that saw the world as a really F'uped place. He was angry at a lot of things in the human experience, but he knew that screaming about it wasn't going to change things....so he made it funny and satirical....he was one smart dude.