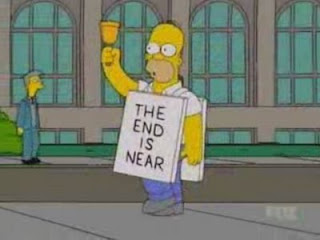 The Large Hadron Collider goes online today. Apocalypse conspiracy theorists are agog over the possibilities of catastrophe. Me too, although I really don't think any of them are gonna happen. The mind, however, races.

There is the remote possibility that it could create mini-black holes that would spawn and multiply and eventually devour the entire planet. I think that theory is just racist. They wouldn't be as upset with white holes, I tell you that. But they just hate those uppity black holes.

There is the remote possibility that it could generate something called dark matter. I don't even know what dark matter is, but getting worried about this one sounds racist as well. Dark/light...black/white. You be the judge

Or how about the remote possibility that it could actually cause some kind of temporal displacement or flux. From there we could have the basic model for time travel, for lack of a better phrase. How could this be a bad thing? There is nothing I wish for on a daily basis more than time travel. Well, there is that invisibility/women's locker room fantasy. But I digress.

So, if for any of these reasons the World starts a quick journey to it's inevitable end starting today on the Swiss/French border (that's always where I assumed it was gonna happen anyway - Earl), here are the top 5 things I wanna do with my remaining days. Assuming, of course, that the whole time traveling thing is for real.

So where/when would you travel back in time to if this Super Collider thing actually delivers?

PS - I told you yesterday something was going on with Kim Jong Il. You heard it here first!
Pissed in the corner by Verdant Earl at 12:01 AM

(Yes, I'm leaving a comment to make myself looking more appealing to Gia. Hi, Gia! Want to hang out with a random blogger?)

Two times/places: first, I'd go to 1787 Vienna and take music lessons from Mozart. Then I'd head to Arle and buy some paintings from van Gogh -- cheap.

This is the second hadron article I have not been able to get through. Funniest thing, I keep finding myself waking up on the key board, all drooly.

Whatever it is, if the world does end, it's been great blogging with ya'll.

If no, I have the google follower thing up and running. Now I can stop going to Ajooja's site to get at the sites I want to follow. I am following you Mr. Earl. I like your blog very much.

And I can stop being the top person in his recent visitors list.

I even figured out how to have follow up comments mailed to my email. I mean look at that, it is right there, down below this box I am writing in. Who knew?

So yay for that.

Besides, we've been living with small-scale black holes all along. Where do you think all those socks and pens go?

If the world does end and we all get sucked into a black hole, can I have your lawnmower?

I'd just go seduce my great grandmother so I could be my own ancestor.

Poppy - believe it or not, she doesn't read my blog every day. What the hell is that all about? ;)

Mrs. Hall - wait a minute! Are you saying my post was boring? C'mon...your comment was almost as long as my post, fer crissakes! Go back and read it, there was some comedy gold in there toward the end. :)

Steph - gnomes. Gnomes have been stealing socks and pens all these years. Didn't you know that?

NMTB - and my hedge clippers. But I promised my leaf blower to someone else.

Avitable - Finally! The answer I was looking for. Knew I could count on you!

And rest assured, it is not your writing, it is the subject of the hedron thing.

BUT! I shall reread it today and mine the gold.
:)

i would go back to may of 1991 and tell a young slyde not to ever strike up a conversation about comic books with that geeky guy in the accounting dept.

Mrs. Hall - I never try to bring the "serious" when it comes to topics like this. I usually go for the "sarcastic". Enjoy!

Slyde - good one! What were you doing then, anyway? You came to our department to photocopy the user guide to a video game you were illegally copying and you didn't want to be caught doing it in your department. Right? I have the memory of a steel trap! And the "uppity" thing was a reference to that douchebag politician from the South who called the Obamas that last week.

I would love to spend an afternoon with John Adams and his wifey Mary in 1797 right before he became Prez!!! A glass of wine perhaps and a meal just to pick his brain!!!

Your time travels are very interesting indeed! Where do you come up with all this stuff??? It's funny dude!!

Also, i see i am FINALLY on your blog roll!! YAY!!

P.S. I have no clue what a large Hadron Collider
is!!! I think i quickly read it as a collinder!! You know, like for cooking and stuff!!!

Michelle - Every time I tried adding you to my blogroll, Google added a different blog instead of yours. So I finally had to do it manually.

Heff - when it comes to 'The Top", yeah...we are gonna have to agree to disagree.

I find your in-depth knowledge of the obscure events in world history remarkable.

Kim Jong Il? Reports of his death have been greatly exaggerated. Poured out 40 ounces of O.E. and proper kudos to anyone who understands this reference. Peas.

WLC - I have no idea. Team America? I'm so ashamed.

I'd probably go back to today and tell them not to start the LHC. Color me practical.

Limpy - I think you just blew my mind.

I had Mr. Hall explain the collider to me to better understand this post. It provided a brief glimpse into conversations we use to have. That being intelligent and not about the kids. Thanx for that!

Anyway-black matter is the fuel for the space ship on Futurama.

And-I if time travel were possible, I am not sure I would want to go. I am having a lot of fun right now. No need to leave.

Mrs. Hall - glad I could help.

I've always thought that a visit to an Old Roman Vomitoreum would kick ass.

Dawg doesn't read my blog everyday either (even though I read *his* everyday. ... But who's counting. :p )

Evyl - Those Romas sure could party.

Poppy - I would totally read Gia's blog every day if she had a blog. Costs me nothing to say that. ;)