All I know from the Spanish language is "taco", "enchilada" and "salsa", so I guess I'm gonna have to trust the handy online phrase translator that I found to come up with that phrase up there in the title. What did I type in? "Who is more heinous?". That's the name of the little game we are playing today. Why is it in Spanish? I dunno. I guess certain phrases seem funnier in other languages. Plus SNL did a skit many, many, many years ago called "Who is more macho?", but in Spanish. And I haven't had an original thought in my head in about two decades. So there.

So my post a few days ago about It's Always Sunny in Philadelphia got me to thinking about who the most heinous characters are in television today. I'm gonna excuse the IASIP gang because, well...that's their shtick. They are supposed to be the worst people in the world. Get it?

So, if not them then whom? Did I use "whom" correctly? Whom knows. I'm going to also exclude anyone from shows like Gossip Girl, The Hills or Desperate Housewives. Because I'm a dude. A straight dude.

Here are my candidates. (Warning: Here there be spoilers)

Kelly Kapur (The Office) - Kelly is badass in so many ways. She is a ruthless, empty-headed, shallow caricature of young American woman. Her prey is the small, almost dwarfish Ryan and she has shown that she is willing to go to just about any lengths to keep him/get him back. She even told him she was pregnant once (only to shake her head "no" to the camera immediately afterwards). And her annoying, in-your-face attitude of boyfriend brow-beating was on full display in the infamous ping-pong episode. She gets a few points, however, for being cute. Runner-up: Ryan himself. What a tool. 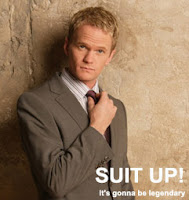 Barney Stinson (How I Met Your Mother) - I never really thought about it before, but the title of this show could be construed as being pretty dirty. Anyway, Barney, as a human, is pretty heinous. He will lie and cheat and use any means available to sleep with a random bimbo. And then dump her. He is the king of the one-night stand. My favorite was the one where he brought a woman back to an apartment he conned a real estate broker into lending him. The next morning he just left her there. Oh yeah, and he broke the "Bro Code" by sleeping with his best friend's ex. You just don't do that shit, yo! Runner-up: His best bro, Ted. He's a fucking whiny bitch.

Tommy Gavin (Rescue Me) - He's an on-again, off-again alcoholic firefighter from NYC dealing with 9/11 by sleeping with his dead cousin's wife. He then reconciles with his family only to have his son killed by a drunk driver. After his uncle kills the drunk driver, he splits from his family again. Only to have an affair WITH his wife who is now sleeping with his brother. Yeah. His cousin's widow, remember her, tries to kill him (kinda) by setting the house on fire after he tells her he won't move away with her. And that was only the first three seasons. I stopped watching regularly, but he's still pretty heinous in Season 4. Runner-up - Everyone else in the show. They are all a bunch of douchebags.

Benjamin Linus (Lost) - I can't figure this dude out. There are times that you just wanna feel sorry for him. He got his ass kicked by the Losties and endured some Abu Ghraib-ish torture at their hands. But then we found out that he deserved it by being the nefarious leader of the Others. They kidnapped, killed, imprisoned and tortured at will as well. How can you feel sorry for a guy like that? Then he lost his daughter and you wanted to feel bad for him again. But his methods and his secrecy put him firmly in the "heinous" category. Runner-up: The Lostie who escaped only to recently return in shame, Michael. This guy is a real douchebag! Or he was. Hehehe.

There are probably others, but those are the first few who come to mind. So I ask you, dear readers...

Quién es más odioso?
Pissed in the corner by Verdant Earl at 12:01 AM

Sylar from 'Heroes'. That dude has the creep factor down pat.

dude
british version of the office... so much better

I'm gonna go with Benjamin Linus since I don't watch that show. I like the characters in the other shows. Sure Kelly is a big nag and Barney is a cliche, but they are good at playing those parts and funny too. Tommy Gavin is a funny one for me because I never really liked Dennis Leary but I DO like him as Tommy. I think he shows some real acting chops even though there are some very strange and fantastical story lines.

I used to hate The Penguin from the old Batman show. The ones with the POWs and OOFs and BLAMs...

I think i gotta go with ol' ben.

i felt bad for him when they offed his daughter, but he truly cares nothing for anyone, and will do anything for the island.

I'd have voted for YOU if only you were on tv...

Kiki - I used to think so as well, but both are pretty damned good.

Teeni - yeah, they are funny on the show. But if you knew those kind of people in real life you would hate them. Imagine a Kelly in your life? Shivers!

RW - Burgess Meredith can do no wrong by me.

Slyde - I dunno. I think he's misunderstood. Like me.

I cannae comment on this subject due to the fact that I havnae a fucking clue who any of these people are.

Bollix - making you a better man than I.

my spanish consists of "lemonada" and "el bano" which i'm sure you guessed was lemonade and the bathroom. but HEY, what else do i REALLY need--- mixers and a bathroom, i'm set!

The douchbags I have to deal with every day in my office are so much more real than these folks,....and they are in 3-D no less.

Tequila - I never would have guessed what "lemonada" meant! ;)

My vote (if this thing is still open) is for Ben Linus.

o-btw-I hyperlinked one of your posts in my posts.

I like how the posts spark inspiration for other posts.

Linus. That guy pisses me off.

Jiggs - Everyone has their favorite. I used to think that the American version was second fiddle, but now I can see that they are both hilarious in their own ways.