So, where did I get that from? 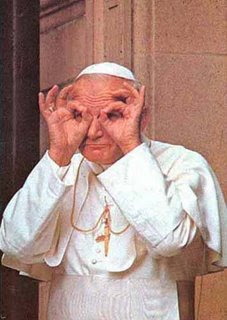 There are words and phrases that somehow just become a part of our everyday life. We hear them on the radio, on the television, in the local pub, on the street and in the bedroom. They speak to us, even cling to us until they become a part of us.

The quote up top is one of those phrases that has stuck to me.

The thing is, I don't know where I heard it from originally. In fact, I'm not even really sure just what the Hell it means. If wishes where fishes, we'd all be Pope. Does it mean that if wishes were as common as fishes, then we would all get our most cherished wish. To be Pope? Who the Hell wants to be Pope anyway? You have to ride around in that stupid bullet-proof car wearing that stupid hat holding that stupid cane. Hey, maybe it appeals to some folks, but I kinda like my way jeans and flip-flops.

I even Googled the phrase. You know what I found?
That's it. That's all there is. We three are the only ones in the history of the interwebs to use this phrase, or so says the Google Gods. Maybe I'm getting the wording wrong, or maybe the three of us are living in a dream world where this phrase actually exists. Like we are all living the same dream at the same time, the three of us. I think I just freaked myself out!

So I put it to you. Have you A) ever heard this phrase before and/or B) heard of where it came from? What are its origins? I'm just dying to know.

Random Wiki: Wham Bam Slam was a short film featuring the Three Stooges from 1955. It was a Shemp, so no one really gives a shit about it. I think the plot revolved around Moe picking up a girl at the local diner, jumping into bed with her and then dumping her. Or Shemp has a toothache. One or the other.
Pissed in the corner by Verdant Earl at 12:01 AM

and after that, the universe was created

Pirates carried the term through the ages, but as their numbers drop, so does wide spread use of the word (most probably to do with rising global temperatures)

Kiki - that comment (with accompanying graph and statistics) made my night. Thanks! Next!!!!

hey b.e. earl. i think you got the deconstruction right. If wishes were as common as fishes, we'd all get what we want. as to people wanting to be pope, i suppose that means this expression has been around since those days when being pope meant you had more earthly wealth and power than even kings. :D The middle ages, maybe?

Rom - Thanks! Seeing as you are one of the other two people I found on the web using the phrase, do you remember where you heard it from orginally?

earl: i think it was a comic book. maybe by bryan talbot or one of those early british writers.

im pretty sure you've been saying it to everybody and everywhere for fucking years now, just to try to get it started as a saying....

If wishes were horses beggars would ride; is the one I knew. Nearest thing I could tell is Popes are often said to be wearing the "shoes of the fisherman" - as I think Peter (the first Pope) was originally of that trade. Now that I have ruined everybody's fun just remember that I myself prefer "What is generally termed reality is, to be precise, a frothy nothing."

Rom - You know, I was going to suggest that it was from Grant Morrison, Neil Gaiman or their ilk. You may be onto something there.

RW - I found lots of stuff talking about a Pope's mitre kind of looking like a fish head and comparisons between the Pope's garb and Dagon, the fish god. You can read about that here:

I never heard this saying before, never heard anyone say it but i like it!!! I do!! I may have to use it sometime on my blog!!! I like wishing for stuff...and no i do not want to be the Pope!!! I'll take a new ipod though!!! :O)

I'm glad my wishes aren't fishes (cause then they'd smell funny) and I wouldn't want to be pope because you have to wear that big heavy ring and have people slobbering all over it. No thanks.

I have not heard of this saying before though. Very interesting. I suspect it started as a different saying and evolved into that somehow because there are other variations that make much clearer sense. I dunno though. Hope we find out someday or now it will make us crazy. I mean crazier. ;)

Michelle - I've copyrighted it now, so you will have to pay me if you wanna use it. ;)

Teeni - You are probably right. It was probably from something else originally. I'll try alternate gooogle searches.

Never heard it although I have heard, 'Does the Pope shit in the woods?'

Evyl - he does. Uses big leaves to wipe his ass too.

Michelle - Initial copyright fees will be nominal, but my lawyers are working on a complicated syndication deal that could net me millions.

I have never heard that before! I don't even think the pope wants to be the pope.

Girly - Oh, I think once you start making bishop and then cardinal you begin to dream of Rome. And power. ;)

Never heard the phrase....this blog was only slightly better than the Superman Blog....but it still sucks.

Not sure if you ever got an answer as to the origin of the phrase or if you even still exist, but I first read it as the title of a short story in an old Magic: the Gathering magazine. Either Duelist or Inquest, one of the earliest issues if not the first issue.

The plot is basically: guy finds magic lamp, rubs, gets wishes from genie, says "If wishes were fishes, we'd all be pope" and poof! everyone on the planet is Pope and every time they wish for something a fish pops into existence.

Sandchigger - You know, I was a M:tG guy back in the day and I read the Duelist and Inquest, so you may be on to something. I think I even remember that short story or comic strip. Wow...three years later! Thanks!

I can confirm. It's a short story from The Duelist. I clipped it and saved it years ago.

I've been saying this for years and also have ZERO idea where it came from. My wife said I'm crazy and made it up. Glad to see someone else has heard it too. You're still one of the only pages on the Interwebs that talks about this expression.

I read an article with this title maybe around 25 years ago. Was a little kid waiting in a doctor's or dentist's office. Can't remember which magazine. Times, rolling stone, newsweek... something like that. Name stuck with me.