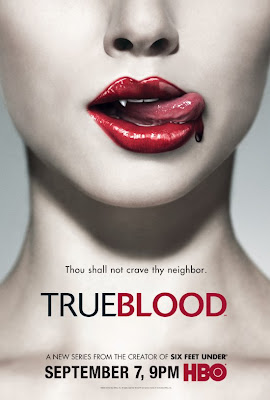 I just finished watching the premiere episode of HBO's True Blood, and I'm hooked. I was actually thinking about passing on the series. I had read a couple of negative reviews, and I really didn't want to get wrapped up with another TV show. Especially on Sunday night with the third season of Dexter just around the corner.

I'm glad I tuned it. It is exactly the kind of thing that is right up my alley. And it took me a while to realize what about it that I was loving, but it came to me toward the end of the episode.

It reminded me of a comic-book. A really good comic-book. Something along the lines of Garth Ennis' "Preacher" or Alan Moore's run on "Swamp Thing". It always seemed like the Brits just did "America" better in comic-books than actual Americans. Something about the wonder of it all, maybe.

That's neither here nor there for my point. None of the creators of this show are Brits. They are true Southerners, in fact. Charlaine Harris (her novels are the source material for the show) is from Mississippi and Alan Ball is from Atlanta. But I couldn't shake the feeling like I was seeing Ennis' or Moore's material up there on the television screen.

And that is about the biggest compliment I can give.

PS - I loved the "God Hates Fangs" sign outside the Church during the opening credits. I think this show is gonna have lots of real-life parallels about discrimination, sexual politics and race relations. How delicious!

Note - Can't get enough of the Presidential race? Try these guys on for size. It's not going to be for everyone, but hey...neither am I.
Pissed in the corner by Verdant Earl at 12:01 AM

We watched this show tonight too and while there were some things I thought were hokey I think they will get better in time. I think your description of it being like a good comic book is right on. And that sign on the church got my attention too. It will be interesting to see where it goes.

No Brits? how can this be? There are more Brits in American TV shows these days than ever before. Rewind it and watch it again, you must be mistaken, surely?

I forgot to record it, but I'll see if I can find a repeat. I don't like the books that they're based on - they never hooked me - but maybe this will be different.

Preacher was supposed to be a series on HBO, and they even created a pilot, but the new head of programming thought it was too dark for HBO. WTF?

Teeni - oh, it was far from perfect. But it certainly evoked something that grabbed me.

NMTB - well, one or two may have slipped in there when I wasn't paying close attention. Insidious, these Brits are. ;)

Avitable - yeah, I don't get that one about Preacher being too dark. I think they were afraid of some of the religious issues that Ennis tackled. He portrayed the living bloodline of Jesus as a shit-throwing idiot, so....

Dammit! I meant to watch this! I totally forgot... oh well, it is HBO.. it will be on again LOL! I love vampires and now that I have read your take on it.. I will definitely be checking it out... thank you :D

damn you for stealing the topic of my post today that im in the middle of writing...

honestly, i was so stoked for this series for a year now, and was hugely dissapointed. it didnt do it for me at all..

Girly - I appear to be one of the few who gave it a positive review. It is hokey, sure. But I still loved it. Dexter rules!

Slyde - I'm shocked, but you do have your reasons. I can see it, but I still loved it.

It was cheesy, but, well, vampires are cheesy. What with the switchblade fangs and all. But as someone who never read the books, I enjoyed it quite a bit. I mean, c'mon, "God Hates Fangs"? And the gramma trying to get the vampire to come speak to "The Decedents of the Glorious Dead" (aka, Sons of the Confederacy)? Classic.

Downtown Guy - Exactly! I think those who aren't enjoying it are stuck in the idea of what they previously liked about vampire stories. Did they think Alan Ball was going to be traditional? The fangs looked awful on that first vamp in the convenience store. On the wrong teeth as well, I think. But they looked better later on in the show and in the clips for future episodes.

The fangs on the first vampire were laughable, but I do love the idea of redneck vampires.

DG - me too! And all kind of other vampires. Is there something that makes a person dark, gloomy and sexually cool when they get turned? I like the idea of a computer geek turned vampire still being a computer geek.

well i'll have to crack open a case of BitTorrent and see how the show is... Not that I need to spend more time infront of a computer...

Beige1 - yeah, and I hate the guy who was in charge of the project (he did Ghost Rider, Elektra and Daredevil...yeah), but he planned on an hour show for each issue. He wanted it to be super faithful to the source material. But HBO nixed it. Too dark. Right!

Ookami - hope you like it. Slyde and I have been arguing all day long about it. He hated it.

I watched it and loved the show. Tara kicked ass. And the theme song/opening montage was wicked awesome, dude.

I was tempted with this show, only because Alan Ball is doing it. "American Beauty" is one of my all time favorite films and "Six Feet Under" was a masterpiece. But due to budget cuts, we no longer have HBO and I have too many projects in the fire. I will just rely on you to give me weekly updates.....that isn't to much to ask, is it?

Lotus - from your reviews and your views on comic-books, this one might not be up yer alley. But ya never know.

I need to watch it again. Everyone keeps raving about it and I was just kinda like "eh". Not in a bad way but I guess I felt indifferent or something.

Of course, I am in the middle of re-watching all of the seasons of Buffy and Angel so maybe this just moved too slowly for me? In any case, I'm willing to say that half of it could have been the fact that I'd been on pain pills all weekend and try again.

Hilly - whoa right there! I said I liked it, but it shouldn't be mentioned in the same breath as Buffy! Oh, Glorious Buffy! What a show that was. :)

Yes, yes, Dawg and I enjoyed it very much.

I enjoyed Anna Paquin in it, and then realized today she is Rogue in the X-Men movies. Dur.

Poppy - not a big fan of Paquin, especially what they did to the Rogue character in the movies. But she was pretty good in this.

Bleh Brits are all over this thing. I can hardly turn on my TV these days without some limey bastard coming out to host a show. Watch the Making of True Blood and count the accents.

This English-American would really like to know what is so wrong with "Brits" being on American television.

Anon & Poppy - kiss and make up. It's the weekend! I just meant Brits involved in writing/producing the thing. And I like me some Brits. Like Poppy said...ain't nuthin' wrong with 'em.

I assure you, as soon as I navved away from your blog I totally forgot I even said that.

I am so excited for tonight because Dawg promises we will drink Vampire wine from glass goblets tonight while we watch!!!

Poppy - that sounds like a great idea! Vampire wine...who would have thought! Goths rule! ;)

I watched it as well. Sure was a lot of violent fucking going on. That wasn't a complaint.