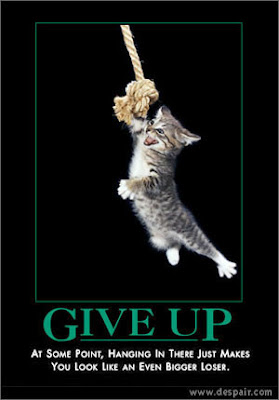 This anonymous spammer is a persistent bugger.  He/she/it just won't go away.

First I outlawed anonymous comments. That didn't work. He just created a temporary ID and kept on going. Then I added word verification. Didn't stop him. In fact, it seemed to goad him on to further heights.

This back and forth went on for a little while until I finally broke down and installed comment moderation for posts older than 3 days. So he still might be spam me on current posts, but he is done for anything older than 3 days. It's a start.

As soon as I implemented comment moderation on those old posts he stopped commenting. Well, he left two comments that I discarded before he realized what was happening.  If he persists, I may be forced to moderate all comments from now on.  Man, I fucking hate comment moderation.  But I also hate comments infected with cyber-AIDS.  What's a blogger to do?

I swear to God(dess), I am not a violent man. But I truly wish bodily harm onto this "person". It's like he holds a grudge or something against me.


Or it is just Slyde fucking with me.  Yeah...probably that.

All I'm sayin' is Doc Brown has the plutonium so that he can power up the flux capacitor, and we need to call the mother-froggin' Libyans! This guy, this spammer-lammer ding dong, needs to get wet up sans kevlar vest, as if he didn't tape together and read Marty's note.

This week saw both Facebook and Twitter shutdown by the Cyber He-Men with the power of Greyskull. Come to find out, there is now speculation that the "terrorists" perpetrated the Denial-of-service attacks, not against the social networks and blog sites that were affected, but rather against one specific person/blogger. My point is that we need to contact these Russian Hounds and put them to work on your Spam-Burgler. Where my dogs at? WOOF!

Where we're going there are no roads.

WLC - that was either brilliant or lunacy. I can't decide. But you need to start your own blog already. Whattayawaitinfer?

Bastards! You need some big scary lads to pay them a visit and have a quiet word in their ear.

I moderate everything, simply to avoid this kind of nonsense, but I agree, it would be better if it wasn't necessary.

In Scotland we call it sending in the heavies. There was one group who was looking for a guy over a grudge. They could not find him so they broke his brothers legs and waited outside the hospital for the other brother to show up. Then they broke his legs as well.

Both brothers was lucky that it was Christmas time otherwise the first lot might not have been in such a good mood.

you do what you need to, sugar! i'll do whatever needs to be done to keep reading you, sir! xoxox

How obnoxious. I wonder why he's picking on you.

I've seen other blogs with comments full of Chinese writing, so don't take it to heart pal.

good luck on fending off the bad energies

Comment moderation is the key. If they don't see their SPAM appear they usually give up. Works for me!

That sucks. Nothing worse than some loser, persistent spammer.
May his dick fall off tonight. Or something. :)

LBTW - it might come to moderating all comments. We'll see.

Rob - Heya! You must know Jimmy.

Savannah - Why thank you!

Jimmy - I've seen a few, but I'd really like this fella to fall off a cliff.

Bobby - I hate for it to come to that because it takes away from the interactive thing.

Sybil - That would work for me.

I feel your pain. I've had a cyber stalker for 8 years now, who leaves long, cut and paste comments about what a terrible person I am.

I've done everything except call in the Irish Mafia. You don't happen to have a number for them, do you?

Steph - Most of my relatives are on the other side of the law these days. I would have to go back a ways to find those hooligans. ;)

What sort of comments does this person leave? You should post some as a blog post for fun!!!

I'd be curious ya know!

Michelle - It's all in Chinese (I think) and it is all spam links to death cyber-AIDS sites.

They get pennies per spam comment. It's kids sitting in rooms with soda and headphones writing human comments. It's fucking annoying, but it's their work.

So totally annoying! I hope you get him!

Welcome to my world. More than once I've had to deal with the random spammer who just won't let go. The worst is this one guy who goes in spurts and has been annoying me off and on for YEARS. It seems to be just another part of having a blog... but it sure seems sad that these people have no life outside of bothering bloggers.

Poppy - that doesn't mean I can't wish for their slow death.

Dave2 - Does your world have candy and booze?