Whether it's making my own coffee at the deli (I know how I like it), pumping my own gas* or using an ATM instead of a bank teller.  If the option for self-service is there, I take it.

But I've been reconsidering the self-checkout at the supermarket lately.

It's not the service itself.  I love it.  Scan my own items, scan my card, bag my groceries...I'm outta there.  Generally a lot faster than having some kid or some semi-retarded handicapped person do it for me.

What I am beginning to hate is the other people who are using self-checkout at the grocery.  Mainly the person in front of me and the person behind me.

The person in front of me is either retarded or it is their first time using this service because they just can't seem to grasp the complexities of scan and pay.  The computer boggles their mind.  They, more often than not, fuck something up and require a "manager" to come over and fix said fuck up.  Then they can't figure out how to pay with their debit or credit card.  The machine tells them EXACTLY what to do...yet they still act as if they are being asked to perform some kind of complex medical procedure.  Slow and steady as they go.  Then they take forever to bag their shit at the end of the conveyor and I don't want my stuff getting their cooties so I have to wait until they figure out the bagging procedures.   Should only take a minute or so, but they clearly aren't in any rush.  They like it at the grocery story, apparently.

I want to punch the person in front of me in the junk! 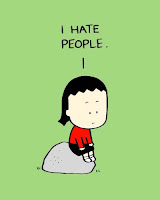 But then they finish and I am left to my own resources.  I do my thing...quickly and I go to bag my purchases.  And, once again...more often than not, the person BEHIND me starts scanning stuff and the conveyor starts going and our shit is getting co-mingled.  Is that my mayonaisse or is it theirs?  Who can tell at this point because the asshole behind me couldn't wait 20 seconds for me to finish my bagging.  And I'm not like the retard in FRONT of me.  I get the job done quickly, but give me a minute, y'all!

I want to kick the person behind me in the ass!

So I think I'm going back to the retarded teenage checkout kid.  He/she may have an extra chromosome, but  at least I won't have to deal with the rest of humanity while buying my toilet paper and Doritos.

*I've got to bust on Slyde a little here.  Back in the day he would never pump his own gas.  We'd be out and about and if he was driving there would be times we would need to stop and get gas.  He always would go to the Full Serve pump and wait for the attendent to pump his gas.  Even if they charged more.  He sheepishly would admit that he just didn't want to do anything wrong and look stupid.  Always made me laugh.  I believe he has manned up and started pumping his own gas as this was a while ago, but since I never miss an opportunity to take a jab at the guy I figured I would share it with y'all.  I'm sure he will be none-too-thrilled with me.  Oh well. - Earl

This is why it's good to go to the grocery store during off hours when nobody else is there!

I would be stunned to end up in a Self-Checkout Line where everyone actually knew what they were doing and things moved quickly. I love them and hate them all at once!

so you just want to punch people in the junk or kick them in the ass...you're an angry little elf. All aside, I agree 100% with you. My kids love the self checkout and do it better than the jack ass in front of us that can't figure it out. You should go Peapod for your groceries...solves a multitude of problems. You can sit home and watch Facts of Life reruns and have your groceries delivered.

Avitable - Unfortunately there aren't any off hours around here. The grocery store is always busy.

Hilly - you feel my pain.

2abes - can I watch Golden Girls reruns instead?

Yeah, the self check out is all paradise and a bit of hell all in one space.

What i do not like is the managers who are trigger happy. I go to 3 different grocery stores and really, each has their own system.

GIVE ME A GODDAMN MINUTE PEOPLE.

ah crap. might as well go to the sixteen year old who is flirting with the 16 year old bagging the groceries. the dorkiness alone is worth the price you pay.

i'll have to do a poston that.

And yeah, that makes sense about Slyde. Glad he manned up though.

SLYDE: Just breathe . . . screwing up at the self service pump is just a fact of life--

it's best to admit that you are a spaz during these times-laugth at the absurdity of it.

that's what I did when the 16 year old dude HAD TO COME OUT OF THE STATION AND HELP ME A FEW MONTHS AGO!!!

WHO HAS A MASTER'S DEGREE!!!

2) i have most certainly NOT manned up yet. Why should i go out and do it myself, when for like 70 cents more someone can do it for me while i sit in air-conditioned comfort and listen to my ipod?

3) You must REALLY be obsessed with me.

Slyde - Obsessed? I guess in the "can't stop looking at a traffic accident" kinda way. But I totally agree with points 1 and 4. Most definitely true.

i sense a picture of you dressed as Gandalf magically appearing on my site in the near future.....

Slyde - I've got way more ammunition in my bag than that. Bring it, bitch! ;) (Just be sure to photo-shop the face and I'm cool with it)

oh i'll photoshop the FUCK out of it.

theres a little button on the top thats labelled "ZOOM".

I agree with you 500%. I love the self-checkout. The less time I have to spend with a stupid human the better. I always do a quick scan of the type of people at the self-check out and weigh my options. There always seems to be someone who doesn't understand personal space. Drives me nuts!

I agree with you completely. I won't even go to the store after 4 on any given day, though, because of all the morons there after work.
Poor, poor Slyde. Should I show him how to pump gas?!

Self checkouts are great, but as you said, only if the people around you aren't morons...

Also, while i am quite capable of pumping my own gas - if some kid is getting paid to do it, i let him. he needs a job, i need someone to pump my gas, plus - then he also washes my windsheild.

Paige - I need my personal space.

Sybil - Oh, I think he knows. He just won't do it because he is an elitist snob.

Diva - AWWW! Avery! That's awesome! Have to tell Gia! Thanks!

I'm sticking with the retarded checkout laborers. I figure If I pay the price, I deserve a show.

Heff - there is the entertainment value, to be sure.

i use the regular line. i figure, if i have to load the stuff in the cart and then load the same stuff on the conveyor belt, i'll let the kid bag the groceries and put them in my car. besides, i have to bring them in and put them away. i mean, where's the damn fun for me if i do all the work? xoxox

Okay you two....i have to ask a stupid question. Where in the hell do they have a full service gas station ANYWAY...not around where I live in Minnesota. Didn't those go out in the 80's????

Have a Super Weekend!

Savannah - I hear ya!

Jenn - Not only do they exist, but in my town (which is made up of 1 large town and several smaller towns/villages) there is no such thing as self-serve at gas stations. It's a town law. Can you believe that?

No nononono, you got it all wrong: Anyone who starts "their" order while you're still bagging your stuff is giving you a gift of their money for bonus grocery objects! The only response to that can be, "hey, thanks!!!" as you bag that second mayonnaise. Or six-pack of yumminess. Or cheese.

fuck that...i don't work for the grocery store. they can pay someone to scan and bag my purchases. cheap bastards, trying to cut corners are gonna get me to work for them.
grrrrrrrrrrr

now i need to go find slyde's site for gandolf you. hehe