We are experiencing one of the coolest lightning storms I have ever seen in my life right now. The lightning is striking a few miles off shore, but the storm has been sitting there for about an hour now. And it is constant lightning the likes of which I have never seen before.

Seriously, it looks like a scene out of a war movie where they show the war at night from about a mile away...bombs exploding in the distance. I have the weather station on right now and the dude says that those of us on the North Shore of LI may see an occasional lightning burst. But it has been steady for a long while now. Very fucking cool.

But all I can think about today is Montana. I've always been fascinated by those distant Western states like Montana and Wyoming. I don't know why. The wide open spaces, maybe? The solitude? I guess my fascination is similar to Vasili's from The Hunt for Red October. I just hope my last words aren't "I would have like to have seen...Montana", like his were.

Then I saw this map and all my dreams of moving to a cabin somewhere in Montana magically went away. 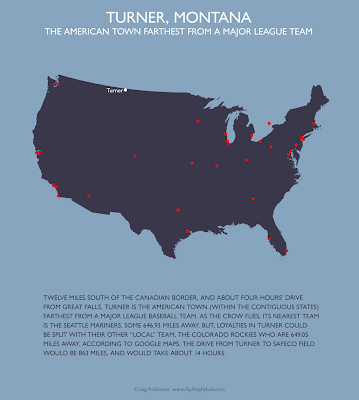 Looks like Montana, specifically Turner, Montana, is about as far away from a major league baseball team as you can get in the Continental US.  Who needs that?

dude, i STILL GET recruitment letters and packages from various clinics in Montana. all promising me the world to come work at their clinic. one had a DVD with a presentation about the greatness of

and really, any newly graduated nurse practitioner and doctor gets these kinds of things. there are like cold calls.

then i looked on the map and really take a look at montana.

and then i said, holy shit.

sorry montana and kentucky and the carolinas and other sparsely populated states.

i needs more than you can give. :)

can you take footage of the lightning?

Yeah, hell with that shite! Thought I bet they do have at least a couple of A or AA clubs somewhere around there.

I love a good storm, last nights was pretty cool. Its been a while since I've seen lightning like that. I've always wanted to go to Montana, Wyoming and Colorado. For me its the open space and wilderness. Maybe you can find a minor league affiliate. Since I couldn't give 2 shits about major league baseball I wouldn't miss it. BTW, your Yankees finally beat Boston this year. Put themselves in a good place.

Holly - I've never been to Kentucky, but the Carolinas aren't sparsely populated any more. North Carolina is booming and there are areas of South Carolina that are booming as well.

Wil - I'm sure there are some minor-league teams around. Gia's father played pro ball in Idaho Falls, and that isn't very far.

2abes - Not only beat them, but demoralized them. They got a game back in the standings last night, however. They ain't done yet.

I lived in Montana as a military brat and loved it. If you like the outdoors, you would enjoy Montana.

Glacier National Park is one of the most scenic parks I've ever have visited.

Hope you at least go for a visit some day, its worth it.

Bet the winters are shockers too.

Wikipedia says that Montana is the fourth largest State in area terms but 44th in population.

that would be a relavant fact if you actually PLAYED baseball...

but since all you do is sit there on your couch in your underwear WATCHING baseball, you should still be good....

wide open spaces and solitude do nothing for me whatsoever.

Rabbit - well, one would have to have a winter joint down in the Florida Keys to remedy that. ;)

Slyde - Is that comment just constantly in your buffer for you to paste in whenever I talk about baseball? Because it's getting old. Maybe you just are getting dim-witted in your old age and you can't think of anything new to say. That is probably it.

its funny that you complain that i give you the same tired response EVERY TIME YOU TALK ABOUT THE SAME TIRED THING.....

I'd only live there if I werer in hiding.

Slyde - I write about a myriad of interesting things about baseball. You don't even really read it when you see that it is about baseball, so why bother pretending. Or commenting that it is the same old thing again. I know you too well. Jackass.