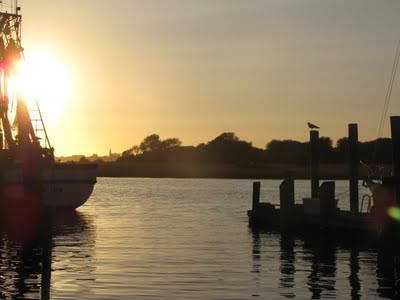 Back from our vacation in the South last night. Gia's sister and brother-in-law were fantastic hosts, naturally. And we had plenty of time to look around the area for the not-so-faraway future as we are thinking of re-locating. The low country region is right up our alley, lifestyle-wise. It'll just come down to when and how, I guess.  More on that as it becomes available.

But here is a brief list of things I did on my vacation. Because it's all about me.
So what did you do on your last vacation?

Note: Remember to play the Bug-Eyed Trivia Challenge every day. I'm not kidding about grits.  I mean to make it my mission in the next few months.
Pissed in the corner by Verdant Earl at 12:01 AM

Sounds like a great vacation. Being from Atlanta I love me some shrimp and grits (recipe on my site) as well as all the other southern foods you mentioned. And I'm impressed you managed to do a 5 year business plan for your client.

My last vacation? I caught swine flu and came down with it the day before we were due to leave, so my lovely wife, lovely stepdaughter and lovely dog went on holiday without me! I got to join them for a day and night though, at the end. Gah.

Who am I kidding? Every day's a holiday for me.

BTW, what are grits?

just got back from cancun, mexico...snorkeling, pool, drinking, eating, cave snorkeling and chicenitza. gotta go check out the mayan ruins....unbelievable

"I got to spend just about every minute of every day with my best friend in the world. And what could be better than that?"

Dude you absolutely slay me...
that is just about the cutest thing ever.

badgerdaddy said...
BTW, what are grits?

What the Beverley Hillbillies ate with jowls...

I've a nasty suspicion I can suss what jowls are.

badger - you had the Swine? Da-yum!

Candy - you know I wasn't talking about Slyde, right? ;)

Wabbit - In Italy, cured pig jowls are considered a delicacy. Goes by the name of "guanciale" over there.

I used to be your best friend. sniff.

On my last vacation (4 years ago) I got chased around Vienna by a camera crew and a crazy director yelling, "Ruhe, bitte!". I was kept reasonably buzzed by the producer and had swollen feet from being on my feet all day.

Slyde - in your dreams, pal!

WLC - Begley will always be welcome. ;)

Steph - Wow! Sounds like its time for another go around, eh?

LOVE me some grits. nothing like shrimp and grits for lunch or dinner. who am i kidding, i've eaten them for breakfast and for a drunken snack, too. yum.

i'm so happy that you had such a great time with your gia. those are the best vacations. yay!

now i gotta convince someone to cook me the shrimp and grits recipe from that pretty peach tart's web site.
hmmmmmm...who can i convince to cook for me?

What did I do on my vacation? Sat in an air conditioned geodesic dome in the middle of a desert with 40,000 half naked people that partyed for 20 hours strait. Other than that...not much.

Becky - Somehow I think you can find someone to cook shrimp and grits for you. ;)

WLC - Oh, we took more. Those are the only ones I posted. See?

Good to have you back my friend.

Sounds awesome. Especially the part about your best friend. So sweet!

your best friend is a lucky one indeed.

and cant you buy grits in your local shoprite?
i dont know anything about them. never had so much as grit. but i could swear i've seen them in stores.
actually, i could just swear period...

A fellow grits fan. I love grits. Plain. With butter. With brown sugar. With cheese. I could eat them with most meals, too.

Our local Denny's has grits as a choice of sides.