This post belongs on MovieGrenade, really. But I just don't think I have the energy for two posts tonight so it comes down to The Verdant Dude. Besides, this is a film that really should be reviewed on a site with "verdant" in the title.

I guess you know that I have a thing for bad movies. I realize they are gonna be awful, but I can usually find something...anything in the film that I enjoy.  It's almost a badge of honor that I can normally sit through just about any film AND that I can kind of enjoy it.

That didn't, um, occur* with The Happening.

This movie was a steaming pile of dog shit.  Everything was bad.  The writing, the acting, everything.   I can't even tell you if the cinematography was any good because I was just so sick of seeing shots of the wind moving through the trees and bushes.  Do you realize how much work had to go into making this film this awful that there were absolutely no redeeming qualities whatsoever?  I mean, M. Night Shamalamadingdong was trying to make an awful movie, right?  He can't honestly look at this finished product and think that it was any good.  Can he?

I'm just glad that when the inevitable plant toxin/zombie apocalypse comes that I can be saved by exuding good vibes all around.  Better get my mood ring out of storage and practice exuding those vibes.  The trees outside are kinda looking at me funny.

Now let me be clear about something here.  I was expecting The Happening to be awful.  That's why we wanted to watch it.  Because we had heard that not only was the film bad, but it was historically bad and kind of awesome because of that.  But we went into it hoping for this, yearning for this.  We wanted to laugh along with it as it bumbled across our television screen.  But it wound up sucking even more than that.  It went round the bend and wound up being so bad that we couldn't even appreciate it's badness.  I don't know if that makes any sense, but Joe Posnanski happened to be writing the about the same thing tonight about a football game between the Raiders and the Chiefs and he, of course, wrote about this sensation much better than I could ever hope to.  Here is what he said:

Joe Queenan invented a word I’m trying to think of now. The word defined the feeling you have when you see something that really sucks but — irrationally — you find yourself wishing that it had sucked just a little bit more.

We wanted it to be intensely awful.  But when a movie is just "regular strength" awful, well...what's the fun in that?  There was only one brief shining moment when it crossed the boundary into intensely bad.  Having just realized that it was indeed the plants that were poisoning us, and I'm still not sure just how that realization came upon him, Wahlberg decides to have a "we come in peace" chat with a fern in this living room they are in.  He sidles up to it, gives it all the good vibes he can think of, and then he realizes that it's made of plastic.  He was talking to a plastic fern.

See that right there is what we were hoping for.  Mark Wahlberg talking to plastic plants.  Gimme an entire two hours of that and I'm a happy camper. But no, instead it was just "regular strength" awful.  And there is no fun in that.  No fun at all.

There were so many scratch your head wtf moments in this film to even come close to listing them all.  But if I had to pick my favorite it would probably be Marky Mark singing "Black Water" outside of that house in the middle of the woods to prove that he was normal.  See?  And when I say it was my favorite moment, what I really mean is that it was the point in the film when my head felt like it was gonna explode the most.

This was a terrible, terrible film.  And I don't mean that as a compliment. 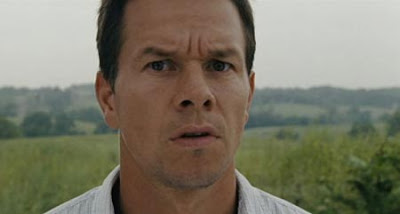 Hey tree...it's me.  Mark Wahlberg.  How you doing?  You're made of wood and I created Entourage.  See, we're not that different.  But you keep on releasing neuro-toxins and making everyone around me kill themselves and that ain't cool.  Cmon tree...I just wanna talk with you, dog.  No?  OK.  Say hi to your mother for me.

Note: Remember to play the Bug-Eyed Trivia Challenge every day. Where are all the bees disappearing to anyway?
Pissed in the corner by Verdant Earl at 12:01 AM

I like Wahlberg as an actor, and I like some of Shyamalan's films, but this one just looked horrible. I was still holding out hope of catching it on HBO someday when I had nothing better to do, but maybe I'll just stab myself in the face instead.

Avitable - It's a shame because I generally like all of Shyamalan's films as well. I love Wahlberg when he is doing stuff like The Departed, but when he does one-dimensional stuff like Max Payne you can see his limitations. If that makes any sense at all. Should be the other way around, but...

The acting of Walberg in The Happening was terrible. Just the way he talked was odd. I have no idea what he was going for with that perfomance.

In Boogie Nights however, excellent.

I've been disappointed by all of Shyamalan's films after The Sixth Sense. I watched this one via Netflix and it was, as you say, even worse than I expected. However, it was all worth it just for your scene between Wahlberg and the tree. That should totally have been in one of those SNL skits.

Say hi to your mother for me.

Zibbs - I liked Boogie Nights, but not as much as just about everyone else.

Ren - From what I understand, the scene of him talking to the plastic fern in this film was Samberg's inspiration for the SNL skit. So I was just plagiarizing that.

Did you ever see the Marky Mark workout videos from the early 90s? Booble it! He's so not the bad-ass that he wishes to be. Not even close. If anything, he's gotta act like a dick now to make up for all that homo-erotic ju-ju he put into the universe years ago. That said, the door to my closet is made of WOOD!

I knew that movie had gone from "so bad it's worth watching" to "so bad I'd rather Avitable stab himself in the face than watch this" when John Leguizamo gave that kid a math problem to keep her focused and I grabbed a piece of paper and tried to figure it out myself rather than pay attention to the movie.

For the record, I was way, way off.

Anybody fancy a pint?

WLC - Wow...just wow. I knew someone would pick up on the What's Happening tip. Just didn't think it was gonna be you. Nicely done!

Limpy - Wanna know something sad? I already knew the answer. Not down to the penny, but I turned to Gia and said "It's over $10 million". Geeks like me know that shit.