Captain Trips, is that you? 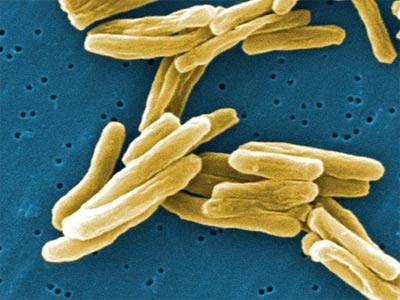 So the first case of a highly drug-resistant strain of tuberculosis hit the United States the other day. Or at least it was announced for the first time the other day. It actually was discovered a bunch of months back when a 19-year-old visiting student from Peru was diagnosed with it in Florida.

The strain, called XXDR, is highly-contagious, aggressive and almost completely resistant to the standard antibiotic treatments. It's so rare that only a handful of cases have been identified world-wide thus far. I guess we've been pretty luck to this point with containing the spread of this particular strain of a disease that still kills about 2 million people every year.  And that's the old strain.  You know, the one that can actually be treated with antibiotics.

This is the kind of thing that keeps me up at night. Not terror attacks, financial collapse or the new Nic Cage movie.  But good old Mother Nature deciding that there are two many humans on the planet and she needs to do something about it.  Like re-introducing an old enemy who has gone back to school and learned a few new tricks.

I like to keep optimistic and I have a lot of confidence in the medical community to fight fire with fire when it comes to tackling these infectious diseases, viruses and bacterium.  But if it happens again it won't be the first time that mankind gets it's collective ass kicked by something so small that it can't be seen without a microscope.

And it probably won't be the last time, either.  If we are lucky.

So, um, Happy Tuesday y'all.

Note: Remember to play the Bug-Eyed Trivia Challenge every day. This is how it begins in those sci-fi flicks, anyway.

there was a teenage girl who survived it...without treatment.

It's a good think you drink so much - that alcohol will kill any germs that get into your system. Trust me, I'm a doctor.

Brittany - yeah, sorry about that.

Holly - Don't worry. Animals can kill us in other ways.

Avitable - Phew! And all this time I thought you were a lawyer. ;)

I still have my fingers crossed that mother nature will come up with a fatal illness, that only attacks stupid people, and evangelica Republicans, and Celebutants, and serial killers.......well, just about everybody that doesn't write a good blog.

Plus, me being a nurse and all, I've prol'l already been exposed to that strain and have immunity!

I agree with Bruce. Except about the blog thing. Cuz there are stupid people and serial killers who write blogs, too.

Now that I'm thoroughly depressed, I guess I'll just go back to work.

Speaking of new Nick Cage movies I saws the trailer for his new movie on Sunday. I almost started laughing out loud.

How does he keep getting these movies??

so warm and fuzzzy
earl, how DO you do it ?

i hope i die easy. thats all i can say

Bruce - I can get my mind around that.

Holly - you really should.

Zibbs - it boggles the mind.

Duderino - I hope I live forever. Like a god!

Oh Holy Hell,
Something new to worry about.

it's all over anyway, sugar. ;~D
xoxoxoxo

I was reading this and thinking"How does this connect to Jerry Garcia(nicknamed Captain Trips)?", and then it hit me that it was Stephen King reference.

Paticus - It's funny because, of course, I was referring to The Stand. But I was gonna post a picture of Jerry just to confuse people and I didn't think anyone would get it. Except you. :)

I will have nightmares now. I thought those were french fries and I was hungry so I read this post. Now I'm not so hungry. But they still look like french fries. Just saying.