I watch a lot of crap. Figuratively.

But I enjoy bad movies, good movies, independent movies, foreign movies, extremely low-budget movies...well, just about any kind of movie. It's an obsession. I know that. I'm not a real big TV junkie so when nothing interesting is on any of the channels, I will put a movie on. And the available streaming of Netflix is like crack to a, um, crack addict. 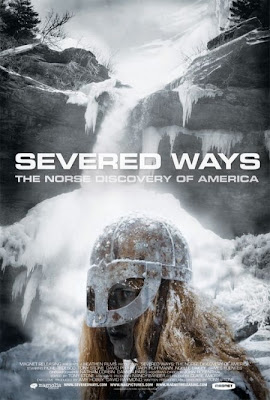 So every once in a while I am gonna come across something unexpected. Sometimes good, sometimes bad. I ran into the "sometimes bad" variety over this past weekend. It's a little film called Severed Ways that I didn't quite make it all the way through for reasons I will go into in a little bit. But it's about two Norse men who were stranded in North America during one of the Vikings excursions west of Greenland around AD 1007.  It was an odd film.  American, for what I can tell even though the men spoke in Old Norse.  Each chapter was punctuated by a brief bit of some black metal music by bands like Dimmu Borgir and Burzum (a pretty disturbing story with that band, by the way). The camera-work was shaky and the pacing was extremely slow.

But it wasn't the pacing, the camera work or the black metal that made me turn this one off.  It was something else entirely.

I remember the only time I saw Caligula some time back.  Slyde and I had gone to over to a friend's house who had just purchased the film on laser disc back when laser disc was the way to go when watching films. And the three of us were totally unprepared for some of the extra hard-core sex scenes that Bob Guccione added to the original film.  Like the brief scene showing one dude giving another dude oral pleasure, if ya know what I mean.  I had somehow managed to make it 30 years without seeing one dude give another dude a blowjob, but there it was.  I'm not a prude, by any means, but there are some things that I would just rather not see.  This is one of them.

Then there was the episode of Oz that showed Christopher Meloni's character peeing in a bucket while in solitary.  Now Meloni was never an actor who was afraid of showing off his hog on camera, but he took it to another level in this episode.  I remember Slyde calling me the next day as we marveled at his "acting ability".  I mean there was no way that was CGI.  He was really peeing in the bucket.  Lee Strasburg can't teach anyone better than that.  Peeing on command on camera.  But this is another one of those things that I really could have done without seeing.

And Severed Ways took it to a whole new level.

About a half-hour into the film, one of the Vikings took a shit in the woods. He took his pants down or his tunic up, whatever, he squatted down and he took a shit.  And then the camera panned down to show a close-up of the actual dirty deed.  Even the cleanup phase afterward with some leaves.

I couldn't get to the remote control quick enough to turn that shit off.  No pun intended.  I was done with this version of 2 Vikings 1 Cup, if you know what I mean.  And I think you do.  I just don't have the stomach for that kind of thing.  The ultimate "I really didn't need to see that" moment, if you ask me.

So, apparently I watch a lot of crap.  Literally.

Note: Remember to play the Bug-Eyed Trivia Challenge every day. Does a Viking shit in the woods?  Apparently he does.

Just put it in the "Q." Thanks for the recommendation.

I always thought the saying was, "Does a bear shit in the woods?", I guess I had it wrong. I bet you never saw that scene coming. You mentioned OZ, did you forget about Beecher's crap. That was some goog acting.

2abes - Until just now. Thanks for the memory.

I thought we had promised never again to talk about the night we watched Caligula together....

i have never seen caligula and i have no problem watching a dude blow another dude. do i need to see this "classic" immediately?

Wabbit - I was just reading about him the other day. I hadn't realized how close his reign was to Caesar's or Augustus' reigns.

Slyde - It was a painful night. Especially when you insisted on re-enacting some of the more hardcore scenes afterward.

Becky - Helen Mirren takes a sperm bath as well, so it's not all dude on dude love. Check it out!

You know - I always get educated when I read your blog. Whether I want to be or not.

Callie - Really? Because I re-read my stuff and I feel dumber for the effort.

ooft! That was a funny post! So funny! So funny!!

There was this movie called "Happiness" I saw once. The movie poster was done by the Los Bros Hernendez... comic book artists . . .

so I gave it a chance.

It was the only movie I walked out on. One of the characters started um, pleasuring himself in the back of his car to a teeny bopper magazine- the kind of magazine that would feature the Jonez Brothers. This character was in his forties. DISGUSTING AND I WALKED OUT!!

The only other film I have walked out on was King Kong (the latest version that came out a few years ago). About half way through it took a turn for the violently disgustly graphic violence.

And then I had to walk out cause I could take it.

cause I couldn't take it

Thanks for the heads up in case I come across that movie.

Holly - That would actually be an interesting post or meme. Movies we have all walked out on. I'll have to think of the ones I walked out on.

Sounds like a steaming pile. Although it could have been corny. Just as long as it all came out okay in the end.