Are You Ready For the Alien Apocalypse?

Because that's gonna happen, or so says noted braniac and human voicebox, Stephen Hawking.  He throws some numbers into his computer brain and the output doesn't look good for humanity.


“We only have to look at ourselves to see how intelligent life might develop into something we wouldn’t want to meet. I imagine they might exist in massive ships, having used up all the resources from their home planet. Such advanced aliens would perhaps become nomads, looking to conquer and colonize whatever planets they can reach.”

He goes on to suggest that even trying to come into contact with extraterrestrial life could be "a little too risky" for we simple denizens of Earth.  He compares the result of such contact with the results of Christopher Columbus' discovery of the Americas and the subsequent near-genocide of the native peoples here.  Instead of blankets infested with small-pox, we might get some kind of deceptively awful comfort technology infected with nano-pox.  Or cyber-bugs.  Or some other kind of dangerous sci-fi malady.

So no cute and cuddle Ewoks or whatever the fuck race ET belonged to for us.  No way, we get our worst nightmares multiplied by ten-fold.  Or so says the smartest man this side of Johnny Cash.

But maybe there is something else going on here.  You know, I've never been comfortable with Stephen Hawking.  Something about that dude that I've never trusted, and I've never been able to put my finger on it until just this moment.

Think about it.  When the Alien Apocalypse comes, what will be the form of our destroyers?  As we will not be able to understand their native alien (?) tongue, they will have to communicate with us through some kind of complicated artificial means.  They will most likely need some kind of sophisticated machinery to use as a mode of transportation in our gravity dense world.  And they will almost certainly be much, much more intelligent that we are.  Sound familiar? 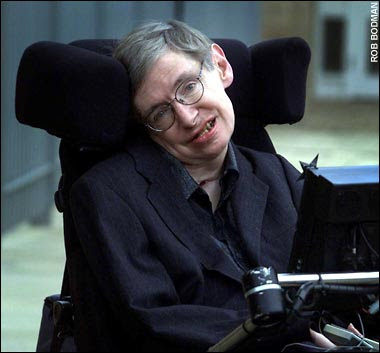 I'm telling you...this guy is a sleeper agent for the First Invasion.  He and his race don't want us to actively search for extra-terrestrial life.  They want their invasion to be a surprise.  So they came up with this ridiculous ploy out of a Michael Bay film.  Like we were gonna fall for that.

You almost pulled one over our sleepy eyes, Stephen Hawking.  But we are on to you and your plans.  The resistance begins now.  The rest of you have been warned!

i loved how the name of this article when it appeared on Yahoo over the weekend, was titled..

Slyde - No that one was about illegal aliens in Arizona. ;)

That's why we must to them first and beat the living snot out of those ETs!

ya know what bugs me about Hawkins? the fact that he has ALS or (Amyotrophic lateral sclerosis, also referred to as Lou Gehrig's disease)

Which strikes down most everyone within five years. Yet there he is, what, in his 40's or 50's. having survived this thing for over 20 years or less.

Which means he is one of the very few, less than 10% of those affliced with ALS to do so.

Which makes no damn sense. Because I use to work in neurology with ALS patients (along with MS patients too).

Uncool - I dunno...could backfire. Wait...that's me listening to the Hawking again. Sorry.

Holly - I've read that his version of ALS is so different from actual ALS, that some doctors believe it to be a different disease. Or at least a variant on ALS.

Sybil - Me right? I guess it happens once in a blue moon.

I hope the aliens are like Stephen Hawking...cos I will save Earth. All these fuckers in wheel chairs with electonic talk-boxes will be threatening humanity...and I calmly say, "Hey...I'll race you for it. First one around the goalpost and back wins!" If that doesn't cut it...I'll "rock/paper/scissors" an alien. Cue the ticker tape parade...it's going to be EPIC!

Doggie - who knows what the hell is going on under Hawking's fake skin/exo-skeleton. Don't get cocky, kid.

This whole immenant invasion thing seems to be cylical with the human race. I recall it back in the 1950and 60 when the whole 'Red Scare' created Invasion of the Body Snatchers and War of the Worlds. It seems that now-a-days, the idea of impending invasion from forigners in general has started the whole cycle all over.

The end result is, we don't know what we will met. They might be super bad-ass aliens out of Independence Day, or it might just turn out that WE are the most bad-ass being in the universe. I am not losing sleep over it.

Bruce - it's that kind of defeatist attitude that is gonna help the Hawkings out in the final battle!