Back in 2000, Slyde and I were pretty stoked to go see Mission Impossible II went when it hit the theaters. The first movie had been pretty cool and the second one was being directed by John Woo! We were big fans of Hard Boiled and The Killer and the rest of Woo's Hong Kong film portfolio. Sure, he had made several uninspired films in Hollywood already, but surely MI:II was gonna be awesome. Right?

Wrong! It was a great big fucking pile of suck.

But, as we were apt to do at that point in our lives, we turned a negative into a positive and started our own episode of Mystery Science Theater 3000. Screw everyone else in the theater! We were gonna get our money's worth, dammit!

I think our favorite part was the ending. And not just for the obvious "oh thank God it's finally over" element. And not the pre-ending climax fight/motorcycle duel. That was just ridiculous. No, I'm talking about the last scene right before the credits. Tom Cruise has beaten all the bad guys and given Thandie Newton the antidote to the virus, and they have a moment together at a park somewhere on Sydney harbor, I believe.

That's not the best shot of it, unfortunately. I couldn't find a video clip of it either. But believe me when I say that it was far, far, far more ridiculous than it appears in that screen shot up there. There were tons of balloons, clowns walking by on stilts, midgets on tricycles (or not), jugglers and, of course, doves. See that kid on the far right? He was having a frisbee catch with his friend who was about five feet away from him.  They were almost handing the frisbee to each other, they were so close.  Seriously. It's like John Woo closed his eyes and thought about Heaven and he tried to cram it all into about 200 square feet. It was obviously his Happy Place.

What brought this up after ten long years? Glad you asked. Since Netflix so graciously added all of Joss Whedon's titles to their Instant Streaming catalog, I've been re-watching episodes of Buffy and Angel. I've been especially interested in watching Buffy Seasons 4-7 and Angel Seasons 1-4 in the correct order as outlined by nerdlier nerds than I.

So last night I got to Episode 3 of Season 1 of Angel, and I was surprised and delighted to see that Joss Whedon has his very own Happy Place. 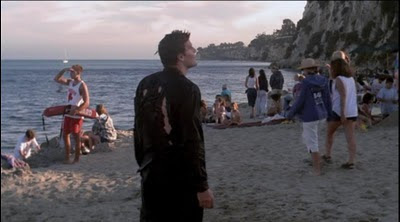 There isn't as much going on in that ridiculously small and shady patch of beach as John Woo's Happy Place, but there is enough to make me, and apparently Joss, very happy. The lifeguard standing there on the left...ready for action. A father and son fishing off the rocks. Some kids digging in the sand. Maybe a barbecue somewhere in the background. No balloons or jugglers, sadly. And none of them were aware of the screaming and fighting and vampires that happened just dozens of feet away on and beneath the pier.  But it's definitely Whedon's Happy Place.

It's an incredibly lazy bit of film-making on both of their parts. Trying to capture a happy and idyllic scene as a way of wrapping up a storyline. Yet it's so cheesy and obvious that I kinda dig it.  So I guess it works on some of us.

My happy place looks nothing like this shizz. Where are the unicorns and passed pets? The cheese? The naked Dave Grohl?

Kinda got lost here after Mystery Science Theatre. I got that part, then everything else kinda went loopy for me.

that scene remains one of the funniest things ive ever seen in the theatre.. i was laughing so hard i almost forgot to slide my hand up your thigh.

and you know what else is funny? i started watching Angel on netflix this week. guess which ep im up to? 3, baby!

p.s. i thought seeing Sawyer as a vampire in ep 1 was pretty damn funny...

Slyde - Well, you never forget to slide your hand up my thigh. Even that Sly Stallone mountain climbing flick didn't stop you, and that was freakin' hilarious!

I saw MI II, didn't see one though. I thought it was geniune as far as I can remember. saw it in a hotel room late at night.

that is my life really.

Holly - The first one was soooo much better. And if you dig JJ Abrams, the third one wasn't bad.

Heff - Oh, we were cracking up in the theater.

In an effort to try and give some counter-point here, I would like to offer up the opposite of the classic Hollywood Happy-Happy-Joy-Joy ending. The type of ending that guys love, but women hate. Because it is about reality and not a feel good warm and fuzzy momement.

The film is the Steve McQueen classic "The Sand Peebles". Probably my all time favorite guy film, it is superb on every level, and the ending, the ending is what life is all about. After overcoming extreme incompetency, racial prejudice and seeing all of the people he cares about get killed, save the for the love of his life that he cannot have, what happens.....he dies, he gets shot defending her, and leaves this earth alone and forgotten.

Sometimes, life doesn't end all warm and fuzzy, sometimes it is just a bitch. Shame on you Mr. Woo...you sold out.

i loves me some Sand Pebbles.

...or my favorite..."Hello Engine, my names Jake Holeman".

Bruce - That's why every nerd loves Empire Strikes Back. Because it ends on a downer...like life. "Fuck! He's my father AND he fucking cut off my hand? Goddammit!"

The first Mission Impossible movie was really good. At least I have memories of it being good. Haven't seen it in years. It was good right?

Kevin - I liked it. Brian de Palma did it and it was tres, tres stylish! I thought.