No...not talking about Easter. Or Passover.

Yesterday was Opening Day for Major League Baseball. The returning champs, the Yankees, played their arch-rival Boston Red Sox on Sunday night. In honor of the holy day, I will refrain from lashing insults upon their heads. I'll save that for tomorrow.

The game started off gloriously. Newest Yankee Curtis Granderson followed up Jorge Posada's solo shot with his own dinger. His first as a Yankee in his first at-bat as a Yankee. Nice! 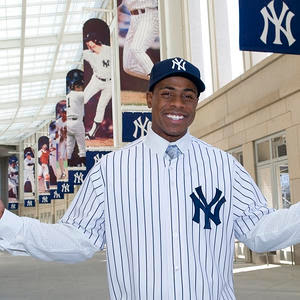 I'm writing this after 5 innings of play, so I don't know who is going to win yet.  Yanks are up 5-2 right now.  Fingers crossed.

I'll let the honorable and wise Annie Savoy lead us in prayer...


I believe in the Church of Baseball. I've tried all the major religions, and most of the minor ones. I've worshiped Buddha, Allah, Brahma, Vishnu, Siva, trees, mushrooms, and Isadora Duncan. I know things. For instance, there are 108 beads in a Catholic rosary and there are 108 stitches in a baseball. When I heard that, I gave Jesus a chance. But it just didn't work out between us. The Lord laid too much guilt on me. I prefer metaphysics to theology. You see, there's no guilt in baseball, and it's never boring... which makes it like sex. There's never been a ballplayer slept with me who didn't have the best year of his career. Making love is like hitting a baseball: you just gotta relax and concentrate. Besides, I'd never sleep with a player hitting under .250... not unless he had a lot of RBIs and was a great glove man up the middle. You see, there's a certain amount of life wisdom I give these boys. I can expand their minds. Sometimes when I've got a ballplayer alone, I'll just read Emily Dickinson or Walt Whitman to him, and the guys are so sweet, they always stay and listen. 'Course, a guy'll listen to anything if he thinks it's foreplay. I make them feel confident, and they make me feel safe, and pretty. 'Course, what I give them lasts a lifetime; what they give me lasts 142 games. Sometimes it seems like a bad trade. But bad trades are part of baseball - now who can forget Frank Robinson for Milt Pappas, for God's sake? It's a long season and you gotta trust. I've tried 'em all, I really have, and the only church that truly feeds the soul, day in, day out, is the Church of Baseball.

He chased something with his dick?

Am I getting the hang of this?

the best time of the year, sugar! xoxox

Do New York and Boston have baseball teams?

Savannah - We are gonna go see the River Dogs in Charleston next week. Fun, fun, fun!

one day you will finally realize that Bull Durham and Get Shorty are 2 shitty movies....

Sybil - I'm anxiously awaiting the first start of the season of Mike Leake. He broke camp with the Reds as their 5th starter and his stuff is supposedly electric. And Aroldis Chapman, of course. Whenever that happens.

Slyde - I'd be surprised if you ever sat through all of Bull Durham.

Thanks for that -- I went and added Bull Durham to my wish list. Of course, then I had a thought that I might already have it and just have forgotten and low-and-behold, when I checked my database there it was. :-)