Way before our little gal Sammi passed away, Gia had her heart set on another Ragamuffin kitten.  So we contacted the breeder in Georgia who  we've used before to get on her radar for upcoming litters.  And we've decided which little fella we are going to adopt. 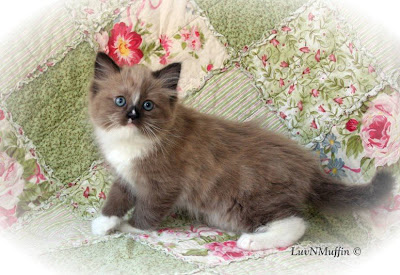 That picture was taken a few weeks ago, he's now 12 weeks old and Gia will be picking him up over New Year's while she is down South.  Because of his coloring, he's called a "Chocolate Drop"...I really don't know what that means.  But he does have a cute white spot on his nose, doesn't he?

We aren't in love with the name, though.  We adopted Avery from the same breeder and kept his name, even though we mostly call him Bootsy these days.  So since were are going to call him something else anyway, we decided we need to rename him.  Here are our current favorite names:
Feel free to add your suggestion in the comments.  I promise not to crap all over them too badly.  Unless they really suck.

*That's how it's spelled in the credits for The Road Warrior.

Jack Burton is my favorite, too.

If you name him Dave Grohl, he'll have to be mine. Only, really = cute as he is, he ain't no Dave Grohl. Not sexy enough. :)

I always have to get a feel for the cat before I name it. It might be something totally different, like, Mike.

Sybil - I could never name a cat Mike. I know too many douchebag Mikes...especially when I look in the mirror. ;)

I'd name him Hercules. But we're done with pets so I probably don't have that vote anymore.

RW - Everyone has a vote. It's like democracy. Ahh...just made myself laugh. :)

I vote for "footsie"... as long as it doesnt get you TOO excited every time you call the little fella.

dude, you had me at the quiet man! but leo is right up there, too. xoxoxo

ok, i will be laughing all day re this vw: butspurs

Slyde - Don't look now, but your (yes, YOUR) foot fetish is showing again.

Savannah - Butspurs is a classic! Wait....how about THAT for a name? ;)

He looks like a very adorable (and fuzzy) Jasper. :-)

ETW - Jasper is a cute name...I'm not sure we are going for cute though. Love The Specials too!

I think you should call him 'can opener', since that is the only sound that a cat will come to.

The great thing about cats is that you can give 'em a new name every week. They never answer to them anyway.

I'd call him Seamus. He looks like a mick to me.

Limpy - I'm working the Irish name angle. But our cats, surprisingly, do answer to their names. Even the big dopey white cat.

Our cat answers to her name (and not just when food is involved). She also does a few tricks on command, but my greatest accomplishment is having her potty trained (using the regular toilet - we don't have a litter box). It's on YouTube: "Bella uses the potty". :-)