I think I might have a new favorite TV show.

It's called Torchwood and it's a BBC production and a spin-off of the latest reboot of Doctor Who. Now, I was never a Doctor Who fan. In fact...I just didn't get the appeal at all. Cheesy special effects, cheesy storylines, cheesy scarves. Just a whole mess of cheese. But I also never really gave it a chance.

When the reboot started back in 2005, I did give it another try. And I did find that I kinda liked it. Not enough to keep watching, but enough to earn some begrudging respect for it. I think I stopped watching after about 6 episodes.  Right before the main character from Torchwood was introduced.

But Torchwood (an anagram for Doctor Who) is an entirely different beast. Made to be shown later in the evening, it has higher production values and more adult content. The makers of the show wanted to do something similar to those early episodes of Buffy the Vampire Slayer, but ya know...with British accents, cursing and some partial nudity.  And you know how I love me some Buffy.

So I jumped in the other night with the first episode of Season 1. And I loved it. It's a great idea and far enough away from Doctor Who that my past prejudices haven't come to light.  Now I have all three seasons queued up on my Netflix Instant account and ready to rock and roll.

And I kinda dig Eve Myles who plays Cardiff policewoman Gwen Cooper.  She's got these great freckles and a goofy sexy space between her two front teeth.  Ah...I can't explain it. 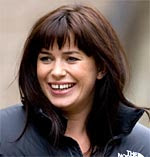 I enjoyed the first few Torchwoods, then I got titsed off with it.

I walked past John Barrowman once near Earl's Court tube station, turned the corner and what's outside the station there? An old-style police box. Spooooooky. I guess he's too good to use the tube like everyone else.

badger - And he's a Scot, right? Pretty decent American accent he does.

ill probably give it a shot this month..

I'll have to check it out!
And I am not surprise -you seem to like quirky chicks - which is cool. :)

Sybil - Well, quirky is ONE way to put it. Stark raving mad is another. I think Gia would agree. ;)

Oh no! Not another Torchwood fan. My housemate loves Torchwood. I cringe whenever I hear it starting...

Sorry Earl. It's a bit too crazy for me

I'll have to check it out. Given that you're a fellow "Raising Hope" fan, I bet I'll like it.

Olivia - I understand it's not for everyone.

LM - Well, it's COMPLETELY different from Raising Hope. So keep that in mind.

Scottish born, yes - there's no trace of an accent with him now though, his accent is 100% American. I think they moved there when he was young.

You had me at Buffy...
And I think the space is sexy but that might just be because I used to have a little one of my own *g*