Saw a bunch of films over the weekend, so I thought I hit you with some quick reviews.  Because my opinion means oh so much to my adoring readers.  Humor me, okay?

______________________________________________________
Sheitan (2006) - The French really are making some wonderful horror films these days.  And by wonderful, I mean disgusting and disturbing.  If you are into that kind of thing, and, of course, I am.  A group of young folks leave a disco after a brief brawl, and they head to the countryside with a new female friend for the Christmas holiday.  Things get weird when they encounter her family's oddball caretaker (Vincent Cassel) and some of the local crazies from the nearby village.  The caretaker has taken a particular fondness to one of the young men, and the tensions that ensue are not of the sexual nature.  Not between those two, at least.  Creepy dolls, creepy villagers, creepy cousins, creepy childbirths, creepy satanic rituals...it's just creepy.  And the last 15 minutes turns into a complete nightmare.  Something right out of Rosemary's Baby or something.  Fun! 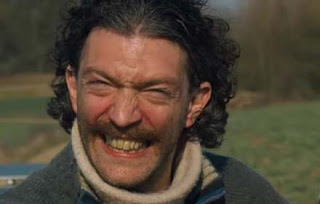 Centurion (2010) - I don't know how Neil Marshall keeps doing it, but this is the fourth film that he has written and directed (along with Dog Soldiers, The Descent and Doomsday), and they have all been tremendous fun.   Even when they wander far from the actual story like Doomsday did with the silly medieval stuff.  This one tells the tale of the fate of the legendary 9th Legion of Rome as they battled with the Picts of Britain in the early 2nd Century AD.  Sure, it's violent and often silly.  But I think Neil Marshall gets that films are meant to be fun.  I'm sure most it's riddled with historical inaccuracies as well.  Too bad.  It's not going to change your life, but it sure is a lot of fun.  All I know is that I want more genre movies from Neil Marshall.  Now! 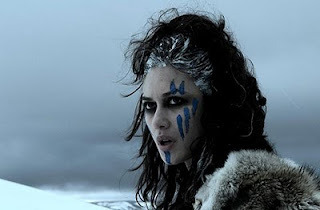 Vengeance (2009) - Man, I loved this movie and I'm not really sure why.  It's often plodding and the English spoken by the mostly French and Chinese actors is effing ponderous.  But it grabbed me right away, and there were times I was literally on the edge of my seat when the action finally did arrive.  It's about a older French chef who comes to Macau after his daughter's family is brutally killed by a trio of assassins.  His daughter is still alive...barely, and he vows to avenge her and her family.  He stumbles upon another trio of assassins, and arranges to have them assist him with hunting down the killers.  Because he is no ordinary chef.  He is a former assassin himself.  But he also has a bullet in his brain from his previous life that is slowly killing him and affecting his memory.  The relationships he builds with his group of killers hardens almost immediately, and the film itself is about these relationships and the ideas of loyalty, friendship and sacrifice as much as it is an action flick about vengeance.  The lead is played by legendary (and hypnotically odd-looking) French singer Johnny Hallyday.  Not sure if he is a "good" actor or not, but I couldn't keep my eyes off of him.  It was slowly-paced, but beautifully filmed.  Filled with references and homages to classic Hong Kong and French cinema.  Check it out. 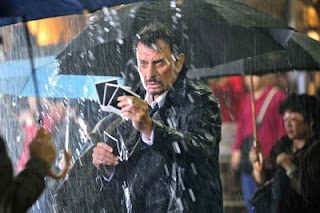 My Netflix Rating: 5 out of 5 stars
Pissed in the corner by Verdant Earl at 12:01 AM

I will most definately check out Vengance..

Earlsie, I couldn't help but notice you were looking for a good chili recipe on Heff's blog...Google Emeril's Vegitarian Chili recipe:


OMG! the stuff is legendary, seriously.

Candy - Thanks! But I'll have to figure out a way to add meat to it. Veggy chili doesn't do it for me.

i will definitely check out centurion... i loves me some dog soldiers and descent, even if descent 2 DID suck loads...

Damn Netflix. I haven't heard of ANY of these movies.

Slyde - Yeah, but Neil Marshall didn't write or direct The Descent 2, right? Just got a producing credit or something.

Heff - I hadn't heard of any of them until this weekend either.

Sybil - Oh, there's a time and a place for veggie chili. I just don't need to be there for it. ;)

About the only thing that the wife and I watch on netflix is older reality TV shows, like 30 days, American Pickers and Hoarders....which don't translate well to one paragraph reviews.

Bruce - I've tried to understand the fascination with that hoarders show, but it just disgusts me.