One last picture of Sammi

Seriously, I'm not trying to turn this into a deceased pet blog.  Really.

But I just love this picture, because it truly sums up what Sammi was all about.  I may have even posted this before, but fuck it.  Sometimes twice is just as nice. 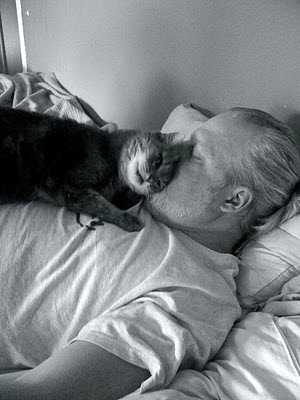 That's what she like to do.  Lay on my chest and rub her face on my beard.  And she had this one fang on the right side of her mouth that, for some reason, was longer than it should have been. She would occasionally get you pretty good with it.  Not on purpose, ya see.  She just couldn't help it.

This kind of situation was usually pretty common after she ate, when she was just looking to settle down and be loved.  The resulting fish stank from her breath was merely a bonus.

By the way, it took just this side of forever for our relationship to get this way.  At first, I was the enemy.  OK, "enemy" was a strong word. But in the beginning, I wasn't one of the chosen few who was allowed to pick her up or even pet her.  She was all claws and nasty looks for a long while.  And when a cat has one long fang on one side of her face and one glassy eye on the other...trust me, you can get some nasty looks.

But I made her my pet project, and I gradually began to pick her up and give her some love.  I always tried to put her down right before she was ready to slice me up, and I think she understood that.  It took a while, but soon enough she was sleeping on my head at night.  The way cats do.

I don't know if I believe in the concept of Heaven, but if there is one then I sure as shit hope there is a place for cats and dogs there. And if there is, then I sure Sammi is there with her best buddy Syd, and she's giving the deity in charge the stink eye.  At least until she gets used to the joint.

Note: Partially inspired by Neil Gaiman's recent journal post about his cat Princess.  I think Princess and Sammi would've gotten along famously.  Or avoided each other like the plague.

Added Bonus:  A video of two cats getting the MST3K treatment while playing patty cake.  The one on the right looks a bit like Sammi in her younger, healthier days.  Enjoy!

xoxox for you and gia

the video was hilarious!

Your family was so blessed to have the time with Sammi and her loving ways. She can never be replaced or forgotten. I love stinky cat breath. {{{Hugs}}} to you all.

as macho and studly as i am, even I have to giggle like a little girl at that video. thats too fucking cute...

Whoa, dude, you lied. This was nothing but a deceased pet blog......but I will let you slide this one time.

i am confident that pets also go to heaven. i mean, it just would not be perfection without them, right?

Savannah - The persons who did that video are genius!

ETW - I don't know if I LOVE stinky cat breath...but I sure miss it.

Slyde - The real you comes out.

Bruce - But just this once, okay?

What a sweetheart, that Sammi.

I believe in pet heaven too. My Little Kitty welcomes everyone in with open paws. :)

That video is BRILLIANT. I watched the first 10 seconds with no sound because my sound was off and then I turned it on and LOL'd.

Oh holy moly - I LOVE the picture of you and Sammi and that video is awesome!
Heaven would not be heaven without our pets, right? They're definitely there.

Poppy - she was muh gurl.

Oh I am so lame. Just now reading this. So sorry to hear about your Sammi.