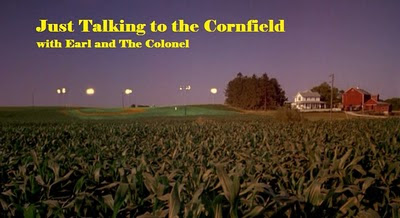 So we're gonna start something new here at the V-Dude.  This Sunday night at 9PM EST, I'm going to be co-hosting an internet radio show on Talkshoe called JUST TALKING TO THE CORNFIELD.  If you are familiar with Field of Dreams, then you'll get that reference.  If you aren't familiar with that movie, then you should remedy that.

I'll be co-hosting it with my buddy Peter, who some of you got to know during the Oscars chat as "Pete the Jew".  Hey...that's what he called himself.  But for the radio show, he has adopted the moniker of the Colonel.  So Earl and the Colonel.  Sounds like poetry.

What are we going to talk about?  In a word...baseball.  But it's going to be so much more than that, I hope.  You see, conversations between Peter and I tend to meander a bit.  Lots of movie and pop culture references, and hopefully a lot of laughs.

The first half-hour of every show is going to us talking about a specific topic.  This week it's a preview of the American League.  After that...well, we are going to open it up to calls, play a little trivia, talk about baseball movies, baseball websites, Slyde's dirty penchant for feet, stuff like that.

I hope you'll join us, even if baseball isn't your particular brand of bourbon.

Here's the link again.  See you Sunday, I hope.
Pissed in the corner by Verdant Earl at 12:01 AM

No kidding, when I read the title, I thought it had something to do with The Children of the Corn!

I think Peter should just call himself "Colonel Jew"!

while talking about baseball will you be making fun of my pirates or do they suck enough that you don't even consider what they do as playing ball?

I think Peter should call himself, "Big League Jew."

Kinda like the bubble gum...only you'll get more than you bargain for when you reach into HIS pouch....HEY OH!

I thought the title was a reference from the M. Night Shammalamma film, "The Happening." All sorts of corn whispering in that one.

If you build it...I will come.

I will definitely try to make the show - be kind to my Reds, ya buncha fanatics...

Steph - Ha! I got over my Stephen King phase 20 years ago.

Slyde - How about Colonel Ingus?

Becky - we will talk about, and make fun of, every team. Even the Buccos. Some good young offensive talent on that team though. They need to match it with some good young pitching.

Doggie - Big League Jew rocks! So does The Happening, but in an awfully awesome way...ya know.

Becky - He usually does.

Sybil - I still have no idea how they made the playoffs last year.

If you host it, I will come.

Jimmy - That would be brilliant. Hope you can make it. And nice call on the reference...

Pete the Jew has to be a Kids of Degrassi Street reference...

badger - No, his name is Peter and he is Jewish. That's all.

I'm usually doing open mic nights on Sunday night, and tonight I'll be at the Improv, but I'll download the podcast!

First? I am awful, I can't believe I let myself get THIS behind on your blog. Second? How weird is it that we both have Jewish co-hosts? Sometimes I feel like we're living parallel lives. You know, without the bacon in my life. And you're a man unlike me. And I stopped watching baseball after the kids came along. And... well, we have the show thing. And Buffy.